The Philadelphia Eagles with be facing off against the Indianapolis Colts tonight in Week 2. Despite the Colts’ loss and the Eagles’ win in Week 1, this game could easily go one way or another depending on the performances of each team. 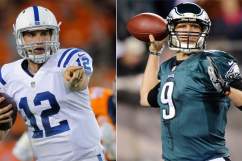 Here’s what you need to know about the game and how to watch it:

After a slow start with no touchdowns in the first half last week against the Jacksonville Jaguars, the Eagles managed to make a huge comeback with 34 undisputed points in the second half to finish up with 34-17 victory.

The Colts faced the Broncos, an exponentially higher ranked team than the Jags, in their opener to get their first loss of the season by one touchdown (31-24). Although the Colts now have a 0-1 record in comparison to the Eagles 1-0 record, it does not say much about the matchup tonight. It is very possible that the Colts could have back-to-back losses based on the performance of the Eagles’ defense and the offensive prowess coming from Sproles and McCoy.

The Colts got into Broncos territory eight times, but only scored on half of those trips. Indianapolis can’t squander those opportunities. That will be even more pertinent for the Colts this week because the Eagles have a quick-fire offense that scored 34 unanswered points against the Jaguars.

On the other hand, the Eagles should be extremely worried about Colts quarterback Andrew Luck who has yet to lose back to back games during his time in the NFL, along with holes in the Eagles’ offensive line created by Evan Mathis and Allen Barbre’s moves to the injured reserve list.

It’s a badge of honor for quarterbacks to be able to bring their teams back to win late in games. Andrew Luck has already shown his knack for that.

Loading more stories
wpDiscuz
3
0
Would love your thoughts, please comment.x
()
x
| Reply
After a come back victory last week, the Eagles will be facing off against the Indianapolis Colts tonight. Here's how to watch.