The FBI has arrested the man they believe is behind the newest incarnation of the dark web’s drug trafficking service, Silk Road. On November 6, the feds announced the arrest of Blake Benthall, 26, in San Francisco. In a press release, Benthall is accused of running a near-identical version of the original Silk Road. His charges carry a maximum penalty of life in prison.

In October 2013, the FBI arrested Ross William Ulbricht, charging him with operating Silk Road. By November 2013, 2.0 was up-and-running.

Speaking to Business Insider, a SpaceX rep confirmed that Blake Benthall was working for the project when he allegedly began Silk Road 2.0. He worked there from December 2013 to February 2014.

SpaceX is a tech startup designed to reduce space transportation costs and enable the colonization of Mars. It was set up by former PayPal and current Tesla CEO Elon Musk.

2. He’s Alleged to Have Made $8 Million a Month From Silk Road

According to the criminal complaint in the case, which you can read above, Benthall was pulling in $8 million per month with Silk Road 2.0. Customers could buy 100 grams of “Afghan Heroin Brown Powder” for 9.70 Bitcoins and 5 grams of the “Highest Purity Cocaine – Direct From Colombia” for 1.04 Bitcoins, the equivalent of $488 dollars. Federal officers also found a range of fake IDs with Benthall’s picture when they raided his home in San Francisco. The total drug listings, according to the FBI, were:

In operating the site, Benthall went by the name “Defcon.”

3. Benthall Retweeted a Tweet About Silk Road 2 the Day It Went Live

All this talk about the #SilkRoad being back up just makes me want to watch #ThePrincessBride.

On November 7, 2013, on the day that Silk Road 2.0 went back online, Benthall retweeted this tweet. This action is referenced in the criminal complaint. The docs also state that the server used to host Silk Road 2.0 was registered to Benthall’s email address.

5. Benthall Was Just About to Relaunch a Startup

Forbes reporter Ryan Mac tweeted that Benthall “ran a tech incubator out of his home” in San Francisco’s Mission district neighborhood. Mac goes on to say that the house Benthall worked out of was swarming with FBI agents. On Angel.co, Benthall says that he founded company called Late Labs when he was 15, according to that company’s website, and they’re planning a relaunch in 2014. 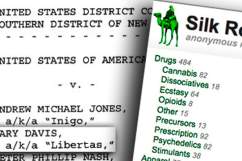