The Google Doodle on December 11 celebrates one of America’s most revolutionary astronomers. Annie Jump Cannon would have turned 151 today. She’s known for creating the Harvard Classification Scheme, which classifies stars based on their temperatures.

Annie Jump Cannon, AstronomerPicture book trailer for the first-ever picture book biography of Annie Jump Cannon (1863-1941). It shines a light on the life of a brilliant astronomer known as "the census-taker for the stars" Written By Carole Gerber and Illustrated by Christina Wald Published by Pelican Publishing Blog post about the art: http://christinawald.blogspot.com/2011/10/book-trailer-annie-jump-cannon.html Music: Bach Invention No 13 Licensed from: Audio Micro Track description Bach invention no 13. Royalty Free Music and Stock Music for Creative Audio Visual Projects Including YouTube, TV, Film, PowerPoint, Flash, and All Media.2011-10-10T22:06:39.000Z

She was completely deaf after suffering from Scarlet Fever when she was in her 30s. Due to this, she never married as she found it difficult to socialize. Cannon contracted the fever while she was in Europe to photograph the 1893 solar eclipse in Spain. Her work there was honored at the 1936 World’s Fair, her work was given the title “In the Footsteps of Columbus.” Despite her achievements, an issue of The Woman Citizen in June 1924 illustrated her low-profile, when the magazine reported:

The traffic policeman on Harvard Square does not recognize her name. The brass and parades are missing. She steps into no polished limousine at the end of the day’s session to be driven by a liveried chauffeur to a marble mansion.

2. Her Mother Gave Her a Love of the Stars

Cannon got her love of the stars from her mother while she was growing up in Dover, Delaware, in the 19th century. Her mother, Mary Jump, taught Cannon about the constellations and encouraged her daughter to follow her love of science at Wellesley College in Massachusetts where Cannon majored in Math and Chemistry . Her father, Wilson, was a ship builder and state senator. Cannon’s mother was Wilson Cannon’s second marriage.

3. She Was at a Loss After Her Mother Died

After her mother died in 1894, Cannon became more interested in education, as the loss made her want to get away from home. Since graduating from Wellesley in 1884, Cannon had lived back at her family home in Delaware. Prior to her mother’s death, during her time at home, Cannon wrote in her journal:

I am sometimes very dissatisfied with my life here. I do want to accomplish something, so badly. There are so many things that I could do if I only had the money. And when I think that I might be teaching and making money, and still all the time improving myself it makes me feel unhappy and as if I were not doing all that I can.

She worked for a while at her alma-mater, Wellesley College, while she also studied for a masters in astronomy. Eventually her work there took her to Radcliffe College where she enrolled in classes so she could use their state-of-the-art telescopes. In addition to her academic pursuits, Cannon was also a passionate suffragette and member of the National Women’s party.

4. She Cataloged 500,000 Stars During Her Time Working at Harvard

The Harvard Computers – Origins of the Stellar Classification SystemA BBC Radio 4 programme about the origins of the spectral classification system, developed mainly by women astronomers at the Harvard College Observatory, including Annie Jump Cannon who gave us our present day OBAFGKM designations.2013-11-26T13:11:32.000Z

When she finished her studies at Radcliffe, she got a job at the Harvard Observatory, working for the renowned Edward C. Pickering. It was there that she developed her system for classifying stars. During her time at Harvard, she cataloged 500,000 stars. You can listen to a documentary about her time at Harvard above. Under Pickering, Cannon and a group of other revolutionary women became known was the “Harvard Observatory computers.” At the time of their hiring in the late 19th century, a Smithsonian article points out “Contemporary science actually warned against women and education, in the belief that women were too frail to handle the stress.” This came from Harvard professor Edward Clarke’s theory in his 1873 book, “Sex in Education,” where he wrote:

A woman’s body could only handle a limited number of developmental tasks at one time—that girls who spent to much energy developing their minds during puberty would end up with undeveloped or diseased reproductive systems.

5. The American Astronomical Society Hands Out the Annie Cannon Award Every Year

Annie Jump Cannon at her desk at the Harvard College Observatory. (Wikipedia)

She died in April 1941 in Cambridge, Massachusetts, at the age of 77. In her honor the American Astronomical Society presents the Annie Jump Cannon Award to the best female astronomers. The winner of the award in 2014 was Emily Levesque. The website of the AAS describes the award as:

The Annie Jump Cannon Award is for outstanding research and promise for future research by a postdoctoral woman researcher. It is given to a North American female astronomer within five years of receiving her PhD in the year designated for the award. For example, the recipient of a PhD in 2011 would be eligible for the 2016 award (which must be applied for in calendar year 2015), but not for the 2017 award (which would be applied for in calendar year 2016). The Cannon Award includes an honorarium of $1,500 and an invitation to give an invited talk at a meeting of the AAS, for which travel expenses will be paid. Self nominations are allowed. 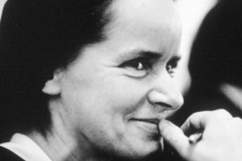 Read More
5 Fast Facts, Breaking News, Google, Google Doodle
Annie Jump Cannon is the American astronomer who changed the science with the discovery of stellar classification. Cannon is celebrated in the Google Doodle on December 11.