Christopher Columbus lands on Watling Island and meets the natives, while three of his shipmates erect a cross. (Hulton Archive/Getty Images)

Did Christopher Columbus discover America when he sailed the Atlantic Ocean to the New World in 1492 under the authority of the Spanish Crown? Was he the first European in the Americas? The answer to both those questions is “no.”

A Science Daily report puts native populations in the Americas as far back as 50,000 years ago. They write: “Radiocarbon tests of carbonized plant remains where artifacts were unearthed last May along the Savannah River in Allendale County by University of South Carolina archaeologist Dr. Albert Goodyear indicate that the sediments containing these artifacts are at least 50,000 years old, meaning that humans inhabited North America long before the last ice age.”

Erikson’s legacy was also a lot less devastating to native populations. Columbus’ arrival in the Americas spearheaded the European slave trade. According to The Encyclopaedia Britannica:

The more recent perspective, however, has concentrated on the destructive side of the European conquest, emphasizing, for example, the disastrous impact of the slave trade and the ravages of imported disease on the indigenous peoples of the Caribbean region and the American continents.

Disease played a large role in the deaths of Native Americans. A smallpox outbreak in Hispaniola in 1518, modern day Haiti and the Dominican Republic, was the first of many to decimate native populations who had never encountered European diseases before.

For four hundred years–from the first Spanish assaults against the Arawak people of Hispaniola in the 1490s to the U.S. Army’s massacre of Sioux Indians at Wounded Knee in the 1890s–the indigenous inhabitants of North and South America endured an unending firestorm of violence. During that time the native population of the Western Hemisphere declined by as many as 100 million people.

According to History.com, Columbus Day became a federal holiday but “it was unofficially celebrated in a number of cities and states as early as the 18th century.” Opposition to the holiday precedes its connection with genocidal colonialism. Early opponents of Columbus Day were by anti-immigrant groups in the United States, who rejected the holiday because Columbus was Catholic and thus it was associated with Catholicism. In more recent decades, Native American groups have protested the holiday and have created “Indigenous People’s Day” as a counter-celebration. 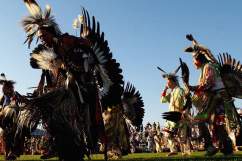 Loading more stories
wpDiscuz
9
0
Would love your thoughts, please comment.x
()
x
| Reply
Did Christopher Columbus discover America when he sailed the Atlantic Ocean to the New World in 1492 under the authority of the Spanish Crown? Was he the first European in the Americas?