Heavy sat down with Shark Tank’s Robert Herjavec to discuss his role in the new Small Business Revolution documentary, which highlights small businesses and their everlasting importance.

When we spoke, it was just as Season 7 of the Tank was about to air, so we revisited some of his past deals and got a glimpse into what’s to come. We also drew parallels between the documentary and the reality show, whose goal is also to enable small businesses to thrive. (He even gave us his take on this season of Dancing With the Stars.)

Directly following his interview, we talked with Amanda Brinkman, chief brand and communications officer of Deluxe, who Herjavec teamed up with to launch this progressive movement.

To read about one of Robert’s Shark Tank deals, see below: 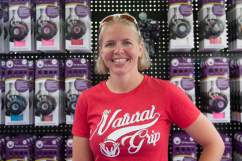 The Natural Grip Grows 500% After ‘Shark Tank’: Interview With Owner