French teammates Mathieu Valbuena, left, and Karim Benzema before a game in 2014. Benzema has been arrested in connection with a plot to blackmail Valbuena over a sex tape, police say. (Getty)

Real Madrid striker Karim Benzema has been arrested in connection with a plot to blackmail his France teammate Mathiue Valbuena over a sex tape, the Guardian reports.

Benzema, 27, arrived Wednesday at the police station in Versailles for questioning. The police investigation into the blackmail attempt began in July, according to the Guardian.

Another former French soccer player, Djibril Cisse, was detained as part of the investigation last month, but was released without being charged. Three other men have been arrested, including one who is closely tied to Valbuena and had access to his cell phone, have been arrested, the BBC reports.

The blackmailers threatened in phone calls to the Lyon star to release his sex tape, which was recorded on a cell phone, before the 2016 European Championship in France, the BBC reports. Valbuena is married to Fanny Lafon, but it’s not known if it is her or another woman in the tape.

1. Benzema’s Alleged Involvement Centers Around a Conversation at a French National Team Meeting

Karim Benzema, right, and Mathieu Valbuena walk in front of a bus prior to board a plane to Brazil, at the Lille’s aiport in Lesquin, northern France, ahead of the 2014 World Cup. (Getty)

Benzema became involved in the investigation after he mentioned the sex tape to Valbuena at a meeting of the French national team in October, the Guardian reports.

Police are trying to determine whether Benzema was offering Valbuena friendly advice, or whether the conversation was part of the blackmail plot, according to the Guardian. 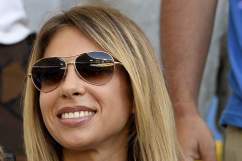 2. A Friend of Benzema’s Brother Has Also Been Arrested

A close friend of Benzema’s brother has also been taken into custody Wednesday, the BBC reports.

Sources told the French media that the blackmailers contacted Benzema’s relatives and friends in an effort to push Valbuena to pay them, according to the BBC.

3. Benzema & Valbuena Have Played on the National Team Together for Several Years

Valbuena, left, talks to Benzema during a training session at the Santa Cruz Stadium in Ribeirao Prato on June 10, 2014. (Getty)

Benzema and Valbuena, 31, are both veterans of the French national team. They have been teammates on the international squad since 2010.

Valbuena currently plays domestically for Lyon, after previous stops at Dynamo Moscow and Marseille. Benzema is recovering from an injury to his left leg. 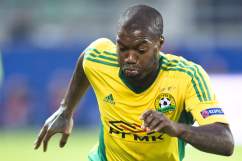 4. Benzema’s Attorney Says the Striker Wants to ‘Put an End to the Controversy’

Benzema’s attorney told the media his client is cooperating with investigators.

“When his name was mentioned by the press, Karim Benzema immediately let the investigating judge know he was available to investigators,” lawyer Sylvain Cormier told Le Parisien newspaper.

“It was therefore completely normal that he should respond to the summons. In fact, he would like to put an end to the controversy sparked by this affair in which he has played no part, as soon as possible,” Cormier said.

The crime of blackmail carries a potential sentence of five years in prison in France.

5. Benzema & Another Teammate Were Accused of Having Sex With an Underage Girl in 2009

Valbuena speaks with Benzema during a training session in Clairefontaine-en-Yvelines, outside Paris, on June 4, 2014. (Getty)

Benzema and another teammate on the French national squad, Franck Ribery, were accused in 2009 of paying to have sex with an underage girl.

They were cleared of the charges last year, the BBC reports.