People in Las Vegas have spotted what looks like a large meteor or asteroid over the skies in Las Vegas. But others are saying it might not be a meteor, but something else. Speculation includes part of a Soyuz rocket from the International Space Station that was expected to be traveling over that region sometime within the day. A U.S. official recently said the meteor might be from Russian space debris, which lends credence to that theory. Here are videos that you don’t want to miss, along with details about the leading theories about the meteor’s origin. You can also view photos of the meteor in this article.

1. The Fireball Burned Over Las Vegas and Was Also Spotted in California & Arizona

The meteor-like object was spotted in Las Vegas, northern and southern California. One person from Coachella Valley in Southern California commented on a YouTube video that he saw it in the northern sky, traveling south/southeast. According to 3 News, reports about the meteor came in from Bakersfield, Laughlin, Sacramento, Mesquite, Cedar City, and Pasadena, even as far north as Reno.

The following video, shared on Facebook by Cody Krecicki, shows the fireball in detail before it started to break up:

This 40-second long video was taken in Las Vegas at Warm Springs and Ft. Apache. You can see green and blue sparks coming off the meteor as it moved right over Cody’s house. He saw the meteor/fireball as he and his family were pulling into the driveway of their home. It was moving to the southeast from the northwest, very slowly, he said.

Cody told Heavy: “We thought it was a shooting star or comet at first. Or a government test of some kind. My little girl Ellie, 13 months old, and … couldn’t stop saying ‘Wow!’ as you heard in the video. It was mesmerizing and a little bit spooky at the same time. It was a green and blue electrical cloud with a rocket like smoke exhaust trail behind it, never have seen anything like it.”

2. The Fireball Was Too High in the Sky to Be an Airplane, But There Were Rumors It Was a Missile Test

A local airport told 3 News that the object was not an aircraft or airplane, as it started out too high in the sky. Rumors started immediately that it might be a missile test, but there was absolutely no information to backup this speculation. The rumors probably circulated because a mysterious light seen over Los Angeles about a month ago was later confirmed to be a missile test.

3. The “Meteor” Might Be Space Debris or Part of a Russian Rocket Booster

UPDATE: The object over Las Vegas sky can possibly be a meteor or space debris (?@VickiNews3LV) pic.twitter.com/HeycBXdpaQ

No reports have been made yet of anything actually hitting the ground or debris from the falling object being found.

A big point of speculation is that it might be the upper stage from the Soyuz rocket that launched from the International Space Station. You can see the track of the satellite here. It was projected to re-enter the Earth’s atmosphere within the next day, Aerospace.org reported. This theory is strengthened by recent news that an official with the U.S. Strategic Command has said the light was likely from Russian space debris, although he didn’t elaborate on what type of object could have caused the fireball, NBC News reported. Read more about the rocket theory here. 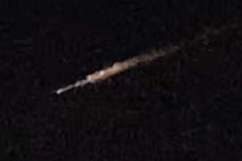 4. It Also Could Just Be a Meteor that Burned Up Entering the Atmosphere

This video above shows just how slow-moving the meteor appeared to be. You can see its long tail in the video. Some elements of what you can see do indicate that it might just be a meteor that burned up while entering the Earth’s atmosphere. Other videos, however, show the meteor moving at a much faster pace: 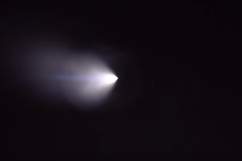 Bright Light in the Sky Over California: The Videos You Need to See

5. But Some People Aren’t Satisfied With Current Theories

@FOX5Vegas Captured an amazing meteor in Las Vegas around 6pm tonight! Saw it breaking up as it fell to earth! pic.twitter.com/xK2ObyL5o9

At first, some people wondered if it was related to Space X, but that does not appear to be the case. Others are still clinging to the hope that it’s a UFO/alien of some sort. Here’s another video of the object from farther away:

Saw the coolest #meteor over #lasvegas just now. I thought it was a missile or something crazy pic.twitter.com/ZYmXUqBKCU

The next video is taken with a shaky camera, but it shows the meteor as it slowly breaks up over the Las Vegas sky:

The following is a YouTube compilation of videos of the meteor: 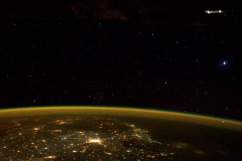 Loading more stories
wpDiscuz
3
0
Would love your thoughts, please comment.x
()
x
| Reply
People in Las Vegas have spotted what looks like a large meteor over the skies in Las Vegas. Here are videos and details on what happened.