Here’s where to look in the sky for the Quadrantid meteor shower. (NASA)

Tonight is the first meteor shower of the year, called the Quadrantid. According to NASA, you’ll be able to watch the meteor shower late, late tonight (or, more accurately, during the very early morning hours of January 4). It’s unclear at this time if the meteor shower will be spectacular or if it will fizzle, but it’s worth a watch. In the U.S., the peak viewing time will be around 3 am Eastern (2 am Central). Unlike other meteor showers, this one will just last about two to three hours.

But if it’s too cloudy, too cold, too late, or the weather just isn’t on your side, you can also watch the meteor shower via livestream. Slooh.com is hosting a livestream at this link starting at 7 pm Eastern (6 pm Central). You’ll need to sign up for a free Slooh account first before you can see it. The livestream will feature views from multiple partner sites, along with commentary from astronomers about the event.

If you want to watch Slooh’s video of the last meteor shower, the Geminid, please see this story: 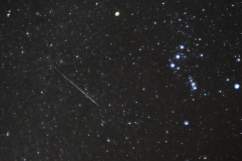 Loading more stories
wpDiscuz
0
0
Would love your thoughts, please comment.x
()
x
| Reply
Here's how to watch a livestream of the Quadrantid meteor shower tonight and where and when to look in the sky from your own backyard.