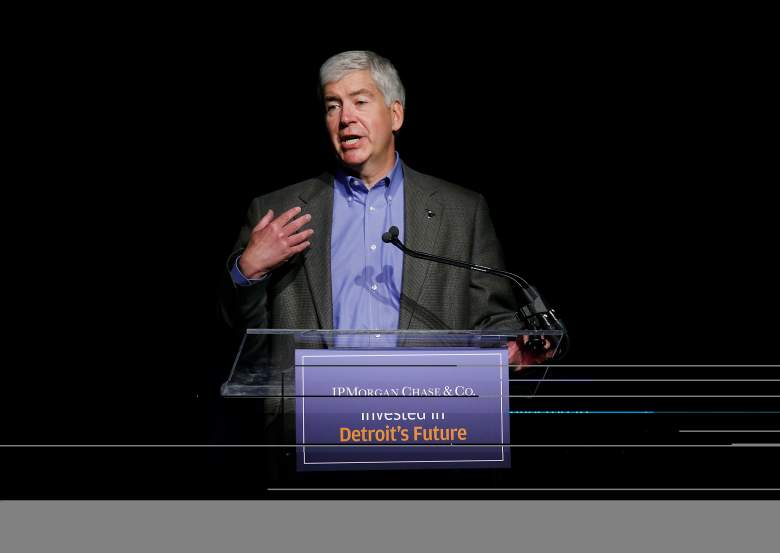 Governor Rick Snyder of Michigan is worth almost $200 million. (Getty)

Governor Rick Snyder of Michigan has recently come under intense fire for his role in the Flint water scandal. Now there’s a petition beginning to circulate seeking to remove him from his position. What is Snyder’s net worth? How much does he make from his governor salary? What type of home does Snyder and his wife own? Michigan Gov. Rick Snyder is worth hundreds of millions. 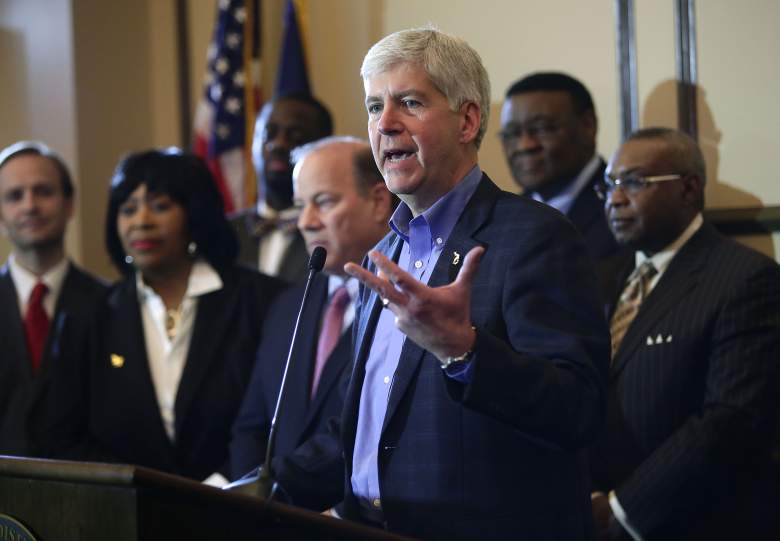 Governor Rick Snyder has amassed quite a fortune for himself. In 2013, Yahoo News reported that his net worth was about $200 million. Snyder, who calls himself a “nerd,” made his fortune through technical ventures.

Although he started out being a quite popular governor because of his ideas for revitalizing Detroit, this soon faded. In April 2014, the city of Flint switched from Detroit’s water supply to using water from Flint River. Residents began complaining that the water smelled and tasted bad and they were getting rashes. They were worried the water was contaminated with lead. Snyder didn’t take action until October 2015, but this was months after his administration had learned the water supply wasn’t safe, Business Insider reported. Two months earlier, the state had delivered 1,500 water filters to Flint. But they didn’t tell residents to stop drinking the water and use filters. And filters weren’t distributed door-to-door until January. On January 5, Snyder declared a state of emergency for the area.

In Flint, there has been a dramatic increase in cases of Legionnaires disease, possibly connected to the tainted water, the Detroit Free Press reported. At least eight petitions to recall Snyder have been filed with Michigan’s secretary of state. The Michigan Board of State Canvassers approved the wording in a recent petition to recall Snyder, Slate reported. This particular petition is seeking his removal because of Snyder’s emergency takeover of certain schools. 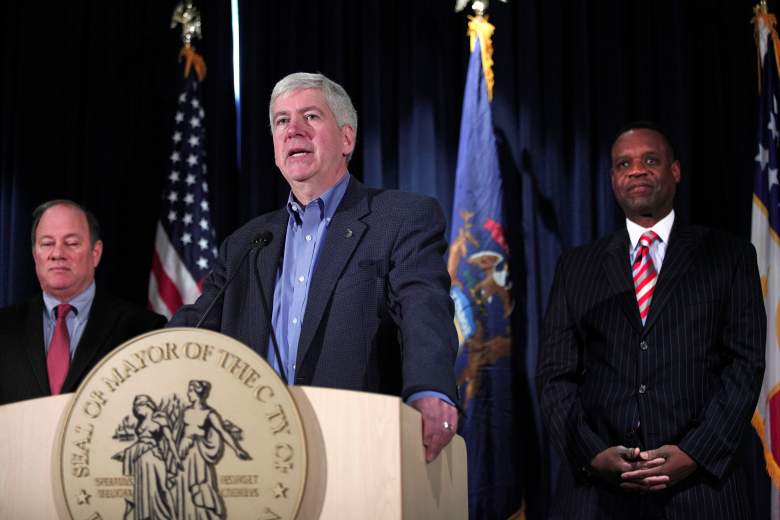 Because of his personal fortune, Snyder has not accepted a salary for his work as Governor of Michigan. In 2014, Time reported that Snyder’s governor salary in 2013 was just $1, when it would normally be $159,300.

This won’t do much to help his reputation, however. Critics say that when Snyder took office, he cut taxes for the rich and had to slash many government programs as a result, which included Flint’s moving to a different water supply, Huffington Post and Salon reported. Flint has since been switched back to Detroit’s water supply, Business Insider reported. Flint has an aging pipe system and Flint River’s corrosive water leached lead from it.

3. He Made Much of His Money as an Executive at Gateway 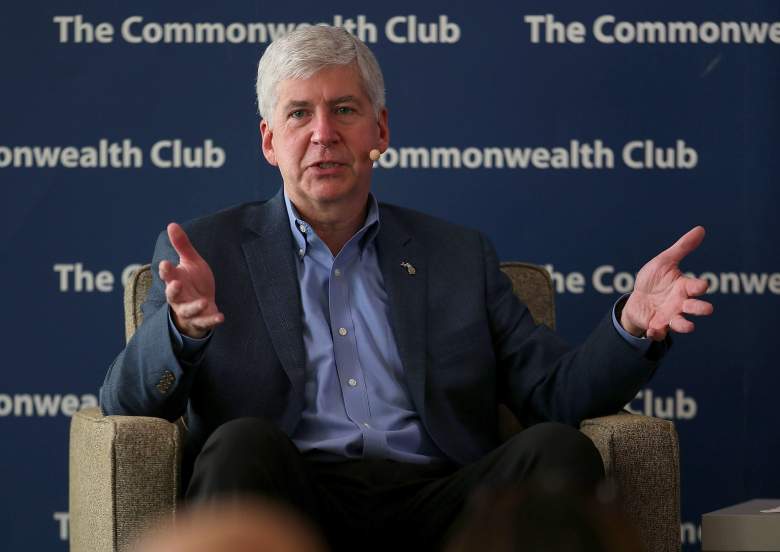 Michigan Governor Rick Snyder made much of his wealth from Gateway. (Getty)

Much of Snyder’s fortune came from his work at Gateway. Snyder had worked at Coopers & Lybrand when the firm was hired to analyze an acquisition Gateway was considering in the early 90s. Snyder counseled against that and, as a result, he was hired as Gateway’s executive vice president in 1991, The Ann Arbor News reported. Gateway had fewer than 1,000 employees when he was brought on and $600 million in annual sales. Snyder moved up the ladder, becoming president and chief executive officer of Gateway before he left in 1997. When he left, Gateway had 10,600 employees and $6.2 billion in annual sales. He served on the board of directors until 2007 and was interim CEO in 2006.

4. He Also Made Part of His Fortune as a Venture Capitalist 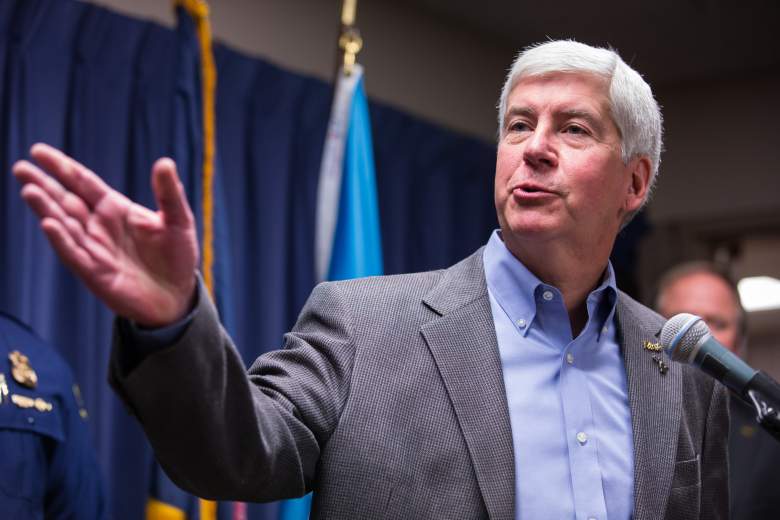 Michigan Gov. Rick Snyder also made part of his fortune as a venture capitalist. (Getty)

Snyder also added to his net worth when he left Gateway and entered the venture capital business. After leaving Gateway, he returned to Ann Arbor, Michigan, and founded Avalon Investments, a venture capital company. He was president and CEO of Avalon until 2000. He then co-founded Ardesta LLC, an investment firm, in 2000. The firm invested in 20 start-ups through 2011.

5. Snyder and His Wife Recently Bought a $2 Million Condo

Gov. Rick Snyder and his wife recently bought a $2 million condo in downtown Ann Arbor. The 4,644-square foot condo is located on Main Street above the Four Directions retail shop, MLive reported. The condo occupies the top two floors of a historic three-story building. They also were adding a rooftop addition to the condo that included a roof deck overlooking Main Street and an enclosed balcony on the second and third floors. They had a home off Geddes Road that was worth $1.4 million that they planned to sell after moving into the condo.

He and his wife, Sue Snyder, released a video Christmas card in late 2015 (posted above) that drew a lot of criticism. In it, he said that they were thankful for the health of their family this Christmas season. Many were angered by the statement in light of the severe health issues many people in Flint are suffering from the poisoned water.

In February, Snyder shared with WWJ Newsradio that he couldn’t even go out to eat anymore without being heckled, Gawker reported.

Loading more stories
wpDiscuz
0
0
Would love your thoughts, please comment.x
()
x
| Reply
Rick Snyder, Governor of Michigan, has come under fire for the Flint water scandal. What is the governor's net worth? How does he make his millions?