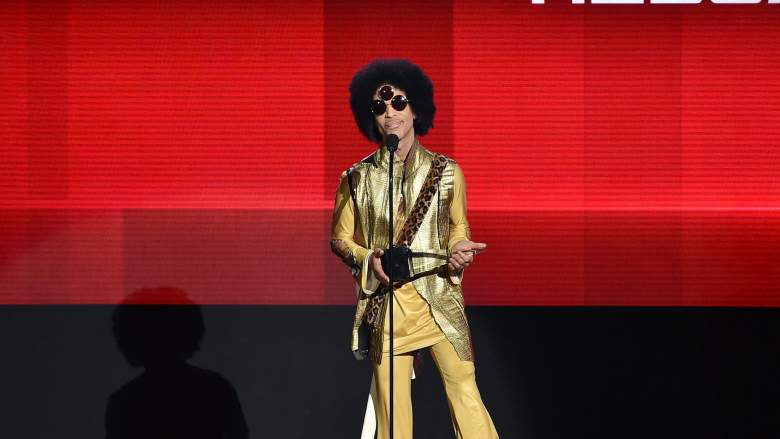 Prince was famously protective of his copyright, but generally lost attempts to control live recordings, allowing us to post the following recordings of his greatest hits:

The song that would define his career actually began as a departure from his style. Prince biographer Alan Light described the composition of “Purple Rain” as an attempt to ape Bob Seger:

He was following Bob Seger into a lot of arenas, and was really interested in why was Bob Seger such a big star, especially in the Midwest. And Matt Fink, the keyboard player, remembers that he was talking to Prince and said, ‘Well, it’s these big ballads that Bob Seger writes. It’s these songs like ‘We’ve Got Tonight’ and ‘Turn The Page.’ And that’s what people love.’ And Prince went out to try to write that kind of arena-rock power ballad that resulted in ‘Purple Rain.’

“Purple Rain” reached #2 on the Billboard Hot 100 and anchored the album and film of the same name, which spawned the two #1 hits below.

I was already a huge Prince fan, and counting down and waiting for the new music and staying up ’til midnight with a cassette recorder by the radio station, by the radio, because the station was going to premiere the new Prince single at midnight. And that was what came out of the box. That sound that you just played. And, you know, this weird, grinding, almost industrial feel to it. And this processed vocal. And keep in mind all of those weird lyrics about, you know, ‘Maybe I’m like my father, you’re like my mother,’ this was months before the movie came out. And so the song was kind of written as this summary statement about Purple Rain the movie, but none of us had seen the movie, so we didn’t know what any of this was talking about. It was so arresting and, you know, it’s the risk that you take when you put something really brilliant and really visionary out there.

The video above, from his 2007 Super Bowl halftime show, features a truncated version of the Purple Rain cut that became his second #1 hit. The long “eulogy” for “this thing called life” was cut in the process.

Prince’s final #1 Top 200 hit, the song was not sent to the Urban charts and did not chart there. Prince claimed to have written the song in front of a mirror.

“Little Red Corvette,” a shortened version of which from a live performance appears above, reached #6 on the Billboard charts. Paste Magazine singled out the song as an example in ranking him 10th on their 2006 list of 100 Best Living Songwriters:

He took the tired old rock-’n’-roll-car-song cliché to such grand heights, it was the greatest single of the entire decade. Every note of the song, from its minimalist opening to its transcendent guitar solo was picture-perfect and has yet to be improved upon. In later years, he was much less successful in trying to adapt to changing styles and his attempts to incorporate hip-hop into the mix made him seem outdated and ridiculous, but none of that (nor his bizarre attempt of a name change or any of his tabloid shenanigans) should ever detract from the greatness of his classic ’80s output.