Hillary Clinton is returning to battleground Nevada. The former secretary of state will speak at a rally in Las Vegas on Thursday.

According to her campaign, Clinton will discuss “her plan to create an economy that works for everyone, not just those at the top, including passing the largest investment in job creation since World War II.”

Clinton is expected to visit Mojave Electric, a business that provides cost effective, state-of-the-art, technological solutions for its customers. Following her tour of the local business, Clinton will hold a rally at the International Brotherhood of Electrical Workers Local 357 Hall. Anyone interested in attending the rally can RSVP here.

Clinton’s event begins at 12:30 p.m. Pacific Time. It can be viewed in the embedded YouTube player via Hillary Clinton Speeches & Events.

The Democratic presidential nominee held an event at Adams City High School in Commerce City on Wednesday to talk about her plan for a stronger economy. Her speech focused on economic issues, including job growth. However, she also took the opportunity to take a few jabs at Republican nominee Donald Trump.

“We’re going to have to come to some bigger spaces when we’re here next,” Clinton said in her opening remarks. “I have to say, I really like fire marshals.” Clinton’s statement was a criticism against Trump who claims fire marshals are not letting all of his supporters into his rallies for political reasons.

During her remarks, Clinton re-iterated that Trump is unfit to lead the United States. “There is no doubt in my mind that Donald Trump is unqualified to be president and unfit to be commander in chief,” she told an overflow crowd at the high school. 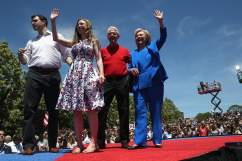 Loading more stories
wpDiscuz
0
0
Would love your thoughts, please comment.x
()
x
| Reply
Hillary Clinton is returning to battleground Nevada, where she will speak at a rally in Las Vegas on Thursday. You can watch the live stream here.