A major explosion in Manhattan sent people screaming into the street and has injured at least 29 people, according to The New York Police Department.

New York police said a possible secondary device had been located and urged people to use caution:

BREAKING PHOTO! Here is the second device found by a NYSP Sgt. At 27 street and 7 Ave. investigation is ongoing pic.twitter.com/x7o9Rr30I3

One man filmed a robot checking out the second pressure cooker style device on Periscope:

Others also captured the scene with cell phones:

However, the injuries were all non life threatening but one was considered serious, the New York police said. The blast occurred outside Associated Blind Housing Facility, which helps the visually impaired, said The New York Post.

“Tonight, New York city experienced a very serious incident,” Mayor Bill de Blasio said in a press conference. “Injuries are significant… At this point, we can confirm that none of those injured are likely to die. There is no evidence at this point that there is a terror connection to this incident.” However, the mayor said: “We believe at this point in time that this was an intentional act.”

New Yorkers, said the mayor, “will not be intimidated.”

The police commissioner, James O’Neill, said officers were on patrol when they witnessed a large explosion. Officers called for additional units and ambulances. He said the exact cause of the explosion has not yet been determined.

The investigation is active and “an extensive search is being conducted,” the police commissioner said. The area around the explosive site was being treated as a crime scene, and there was no evidence that the explosion was caused by natural gas.

At this time, 25 confirmed wounded but none with life-threatening injuries. Actively monitoring situation. #Chelsea

The blast was reported as an “IED” explosion.

ABC 7 also reported that there were at least 25 injuries, according to The New York Fire Department.

BREAKING NEWS: FDNY CONFIRMS EXPLOSION IN MANHATTAN THAT INJURED 26 WAS AN IED. pic.twitter.com/tuOlLCJaGA

The New York Daily News said police were questioning a possible suspect found about eight blocks from the explosion.

Anyone else catch that huge explosion in Chelsea NYC? Crazy world we live in. ?? #NYC #Chelsea pic.twitter.com/QBK1ZR2l2B

Counter-terrorism police were spotted in the Hells Kitchen area.

Counter-terrorism police now at the corner of 53 and 9th in Hells Kitchen #nyc #chelsea #hellskitchen pic.twitter.com/WIHCEOczVh

Fox 5 Manhattan said that the explosion occurred at 8:30 p.m. in the Chelsea area of Manhattan, with the first reports disseminated on social media. The blast was reported on crowded West 23rd Street, said The Associated Press.

Video and photos captured the chaos at the scene.

The New York Post reported that 26 had suffered minor injuries and that a dumpster explosion was the cause.

There were reports that multiple people might be injured.

People posted photos and videos on Twitter as details unfolded.

Stay turned for more details. This page will be updated as details come in.

There was another dumpster explosion in New Jersey early on Sunday, but so far there has been no evidence the Chelsea and New Jersey incidents are linked.

As news about the devices emerges, for those of us who live in, and love, #Chelsea this is a shocking night. #NYC pic.twitter.com/Pj5fwXfQxX 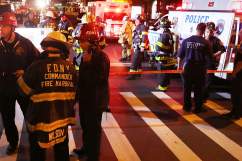 Loading more stories
wpDiscuz
0
0
Would love your thoughts, please comment.x
()
x
| Reply
There has been an explosion in the Chelsea area of Manhattan. See videos, photos, and tweets of the devices and scene.