Today, Phyllis Schlafly passed away in the presence of her family at her home in St. Louis. https://t.co/6cGoAO1fMI pic.twitter.com/4sCfgPoh9d

Conservative icon Phyllis Schlafly — known for her fiery opposition to the Equal Rights Amendment — has died at the age of 92, according to The New York Times.

The Eagle Forum, the conservative forum that Schlafly founded and still led, also confirmed Schlafly’s death on Twitter on September 5, saying she died in St. Louis, Missouri, with her family at her side.

Schlafly is best known for her fervent opposition to the Equal Rights Amendment as well as feminism, said The Kansas City Star.

1. Schlafly Was Revered by the Pro-Life Movement & Social Conservatives

The Eagle Forum, which Schlafly still founded and ran, describes itself as “leading the pro-family movement since 1972.”

The Eagle Forum’s first vice president, Eunie Smith, said: “Today, Phyllis Schlafly has gone home to be with her Lord after a long illness,” according to The Kansas City Star.

The Eagle Forum was based in St. Louis, and Schlafly founded it after the defeat of the Equal Rights Amendment, said Fox 2 St. Louis.

The Eagle Forum explained that its name was based on Psalm 40:31, “an encouragement to the battle weary that those who wait upon the Lord will “mount up with wings like eagles,” the television station said.

Pro-life advocates remembered Schlafly as instrumental to their cause, with one telling Life News, “Phyllis is the reason the Republican Party is a pro-life party.”

2. Schlafly Was Called the ‘First Lady of the Conservative Movement’ & Supported Donald Trump

The Huffington Post said Schlafly was called the “founding mother of the Christian conservative movement.”

Schlafly supported Donald Trump, a position she said led to disagreements with some board members of her organization.

3. She Was a Lawyer Who Testified Many Times Before Congress & Recently Had Health Issues

The St. Louis Post Dispatch said, according to Schlafly’s spokesman, that Schlafly had dealt with health issues over the past month or so, with “A lot of it having to do with being 92.”

“She’s had a wonderful life, a full life,” the spokesman, Ed Martin, told the newspaper.

The website adds, “Mrs. Schlafly is a lawyer and served as a member of the Commission on the Bicentennial of the U.S. Constitution, 1985-1991, appointed by President Reagan. She has testified before more than 50 Congressional and State Legislative committees on constitutional, national defense, and family issues.”

Schlafly’s husband of 44 years, John, died in 1993. Her son, also named John, came out as gay in 1992. At the time, Newsweek described him as “an attorney who lives with his parents in Alton, Ill.” and said he had “emerged from the closet with indignation not for conservatives but for other gays. He steadfastly defended the Republican platform and his mother, who he said was ‘not a monster.'”

The Eagle Forum biography says Phyllis’ husband, John Fred Schlafly, was an attorney she married in 1949; they lived in Alton, Illinois, where he practiced law.

The biography said their children are John, an attorney; Bruce, an orthopedic surgeon; Roger, a software developer (California); Liza Forshaw, an attorney; Andy, an attorney in New Jersey; and Anne Cori, a businesswoman (Kitchen Conservatory in Clayton, Missouri).

Schlafly was born in St. Louis on August 15, 1924, and grew up there, graduating first in her high school class at the Academy of Sacred Heart, the biography says. After her husband died, she lived in Ladue, Missouri, according to the Eagle Forum.

5. Schlafly Was an Opponent of Feminism & The Equal Rights Amendment 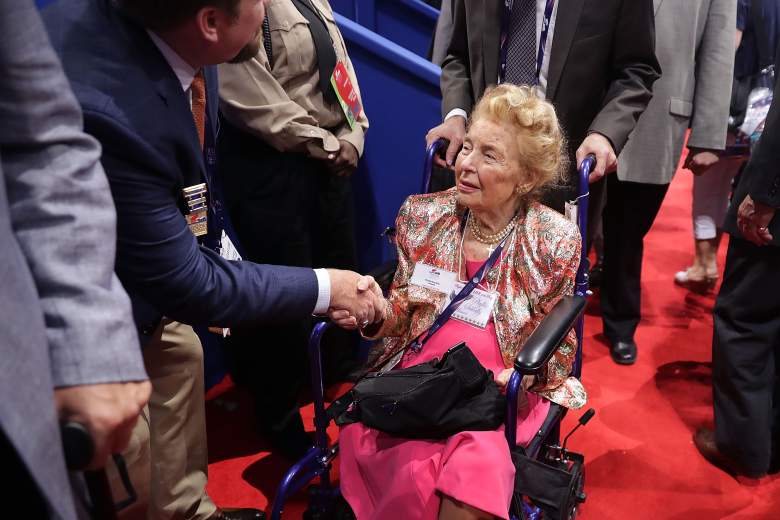 Phyllis Schlafly, president of the Eagle Forum, greets supporters on the floor during the second day of the Republican National Convention at the Quicken Loans Arena July 19, 2016 in Cleveland, Ohio. A well-known conservative, Schlafly launched a successful campaign against the ratification of the Equal Rights Amendment to the U.S. Constitution in the 1970s. (Getty)

U.S. History.org says Schlafly was one of the most visible opponents of the Equal Rights Amendment.

“The leader of the STOP-ERA CAMPAIGN was a career woman named Phyllis Schlafly,” the site says. “Despite her law degree, Schlafly glorified the traditional roles of American women. She heckled feminists by opening her speaking engagements with quips like “I’d like to thank my husband for letting me be here tonight.”

In its statement on her death, the Eagle Forum said, according to Fox 2 St. Louis, “Phyllis has been credited with doing the impossible, when she and the army of grassroots volunteers she led and trained defeated the so-called Equal Rights Amendment, which had passed both houses of Congress and seemed destined for certain ratification among the states.”

Loading more stories
wpDiscuz
5
0
Would love your thoughts, please comment.x
()
x
| Reply
Conservative icon Phyllis Schlafly has died at age 92. She was remembered for her fervent opposition to the Equal Rights Amendment.