A 34-year-old Navy Chief Petty Officer is the first American serviceman killed in action while assisting Iraqi forces in retaking the city of Mosul from ISIS.

Finan, who was stationed at Naval Base Coronado, was serving alongside Navy SEALs and other American special forces in an advisory role to the coalition force supporting Operation Inherent Resolve, the Pentagon says.

The sailor was assigned to Explosive Ordnance Disposal Mobile Unit Three, according to the Pentagon.

1. Finan Was Directing Americans & Iraqis Away From a Roadside Bomb When He ‘Gave His Life for His Teammates,’ His Commander Says

Iraqi Kurdish Peshmerga fighters stand in an area near the town of Bashiqa, some 25 kilometres north east of Mosul, as smoke billows on October 20, 2016, during an operation against Islamic State (IS) group jihadists to retake the main hub city. (Getty)

Chief Petty Officer Jason Finan was directing American and Iraqi forces away from a roadside bomb he spotted when he was killed, Stars and Stripes reports.

The 34-year-old’s vehicle hit a second roadside improvised explosive device and he was killed in the blast, Pentagon officials said.

“He was carrying out his very important responsibilities as an (explosives ordinance disposal) technician,” Secretary of Defense Ash Carter told Stars and Stripes, adding that Finan and other bomb disposal technicians like him are owed a “debt of gratitude.”

Captain Dean Muriano, commander of the Explosive Ordinance Disposal Group that Finan was part of said, “He gave his life for his teammates and was committed and loyal to the country he loved.”

He was killed near the city of Bashiqa. 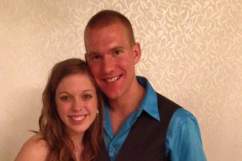 Finan, a native of Anaheim, California, enlisted in the Navy in 2003, the Navy Times reports.

He served aboard the aircraft carrier the Ronald Reagan from 2004 to 2006, and was then selected for training as an explosive ordinance disposal technician, according to the Navy Times.

He had been based with the Coronado EOD team since completing his training as a technician.

“Chief Finan was extremely proud of his service to his country, he was deeply respected by his peers and teammates,” Captain Dean Muriano in a statement. “His family and brothers in arms are mourning and grieving the loss of this respected and talented Sailor.”

Finan is survived by his wife, Chariss, 34, and their 7-year-old son, Christopher, the San Diego Union-Tribune reports.

He lived in Imperial Beach, California, according to the newspaper.

A GoFundMe account has been setup to help his family.

“Your generosity is appreciated and is going directly to the family for current and future needs,” the page’s creator says.

4. His Friends & Members of His Community Called Him a ‘Real American Hero’

Friends and members of Finan’s community were honoring him after his death.

“Just know that Jason Finan was a real American hero,” Sandra Dominguez wrote on a relative’s Facebook post about Finan’s death, according to the New York Daily News. “R.I.P. Jason we love you and can’t wait until we all meet in heaven someday.”

His mother’s neighbors lowered their flags to half-staff to honor Finan.

“It’s the only thing we can do,” one neighbor, Steven Beck, told the Orange County Register through tears. “When I think about the military and the sacrifices it makes, it deeply touches me.”

Congressman Jason Peters said in a statement, “I offer my deepest condolences and prayers to the family and loved ones of Chief Petty Officer Jason Finan. I also offer my condolences to the entire Naval Special Warfare community, which is enduring the loss of another of its finest as it occupies the frontlines in the fight to destroy ISIS and preserve our freedom and security.

“Chief Petty Officer Jason Finan is a hero who represents the best of San Diego, the best of our special operations community, and the best of America – he will not be forgotten.”

5. About 100,000 Troops Have Been Battling to Retake Mosul Since Monday

Finan’s death is the first American casualty during the fight by an Iraqi-led coalition to retake the city of Mosul from the so-called Islamic State, the Washington Post reports.

The coalition of more than 100,000 troops has been heading toward Mosul since last Monday, according to CNN.

Finan is the fourth U.S. service member killed in action while serving in a support role in the fight against ISIS.

Master Sergeant Joshua Wheeler was killed in October 2015 during a raid in Iraq to rescue several ISIS-held prisoners.