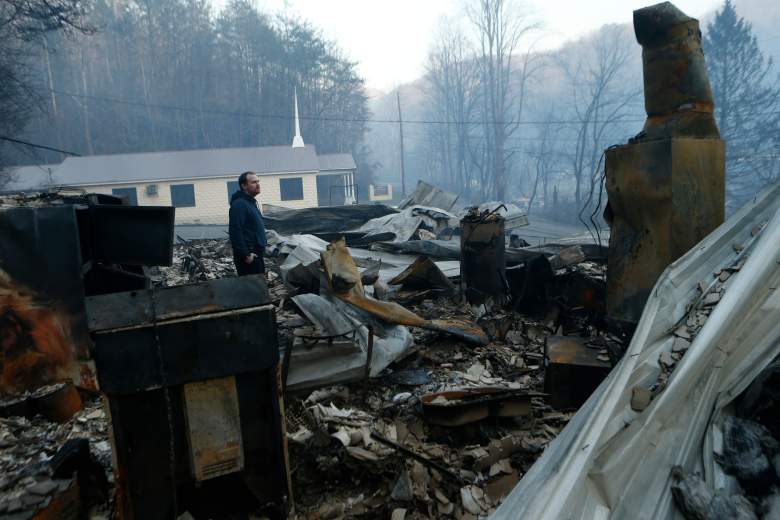 Trevor Cates, walks through the smoldering remains of the fellowship hall of his church, the Banner Missionary Baptist Church as he inspects damage after a wildfire November 29, 2016 in Gatlinburg, Tennessee. (Getty)

As devastating fires swept through Gatlinburg, Tennessee, more than 14,000 people were forced to evacuate from their homes. The fire is mostly under control now, but three died and more than 400 businesses and homes were left burned or destroyed. Residents described the scene as “walking through hell.” Parts of Tennessee will never be the same. Below, you’ll find before-and-after photos showing the damage left from the state’s largest wildfire in 100 years.

Winds of more than 87 mph fanned the flames and helped them spread, causing greater damage. A curfew was put in place for Tuesday night and at least a dozen people were injured. Despite the damage, some places escaped mostly unscathed. Dollywood was left mostly without significant damage. And Ripley’s Aquarium of the Smokies reported later on Tuesday that the animals left behind were doing fine, ABC 7 reported. However, other places weren’t so lucky. Westgate Smoky Mountain Resort & Spa may be entirely gone, the Tennessee Emergency Management Agency announced.

According to residents and news reports, attractions, resorts, and businesses that were destroyed or severely damaged include:

(For a complete list of businesses that were destroyed or damaged in the fire, see Heavy’s story here.)

Here are before and after photos shared that show the damage left in the wake of the fire.

Ski Mountain Road, Before & After

This is Ski Mountain Road, before the fire and after:

Before & After off Ski Mountain Rd in #Gatlinburg, TN. pic.twitter.com/PoS1p8xUbe

And this is another before-and-after GIF of Ski Mountain Road:

Gatlinburg Homes, Before & After

On Twitter, Derrall Stalvey shared this photo from a high school friend, showing a before-and-after shot of her parents’ home in Gatlinburg:

Heartbreaking before/after photo in #Gatlinburg from a high school friend. Her parents' house during a summer visit and then today. pic.twitter.com/FWDr4CV0Vd

And here is another home in Gatlinburg, after and before the fire:

Mountain Lodge Restaurant, Before & After

Here is the Mountain Lodge Restaurant in Gatlinburg, before and during the fire:

Westgate Resort, Before & After

And this is the Westgate Resort, which was left completely destroyed:

Before and after pictures of the Westgate Resort located in Gatlinburg, TN (Shelby Gasche) pic.twitter.com/CQcBJrizqo

Here’s another photo of the Westgate Resort:

Bolze Mansion, Before & After

The Bolze Mansion on 935 Campbell Lead Rd. was also destroyed:

@6News aerial photo from your site before/after of Bolze Mansion. 935 Campbell Lead Rd. in Gatlinburg. Next to Lodge at Buckberry pic.twitter.com/cfnQGzyDZF

Eight Gables Inn, Before & After Photos

Awful before and after picture from Gatlinburg. The Eight Gables Inn B&B is no more. https://t.co/En1JSizcWx #tnwildfires pic.twitter.com/ZQn7e6GNDF

Before – after pictures of Roaring Fork Baptist Church in Gatlinburg pic.twitter.com/uuR8msmGZd

This before and after photo was shared on Facebook. Annette Bramblett McEntyre wrote: “This is where we stayed when we were there a couple weeks ago.”

Additional Locations in Gatlinburg, Before & After Photos

And next is a chapel in Gatlinburg that was destroyed:

Smokies on fire! Married here? Chapel in Gatlinburg. Before and after, making the memories even more treasured. pic.twitter.com/aLh0Q7qQrx

And here is a photo of the Park Vista Hotel in Gatlinburg. Although the hotel was damaged, newer reports say that it survived the fire.

Before and after pictures of the Park Vista Hotel in Gatlinburg where my family & I have stayed several times over the years. So sad! pic.twitter.com/m4bdMiu7w3

A story of two pictures here in #Gatlinburg. The first taken at 9:50am, the second at 2:50pm… pic.twitter.com/d9cjYYWtdY

For more information about the fire, please see these stories below: 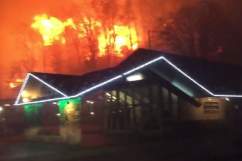 Loading more stories
wpDiscuz
1
0
Would love your thoughts, please comment.x
()
x
| Reply
More than 14,000 evacuated and 400 homes and businesses were damaged or destroyed in the Gatlinburg wildfire. These are before-and-after photos of the damage.