FNN LIVESTREAM: Ohio State Attack Updates; White House Press BriefingBrought to you by Desert Diamond: http://ddcaz.com Ohio State University sent a series of tweets Monday morning warning of an active shooter on campus, telling students to shelter in place and to "Run Hide Fight." Around 10 a.m., the university's emergency management department tweeted "Buckeye Alert: Active Shooter on campus. Run Hide Fight. Watts Hall. 19th and College." Watts Hall is a materials science and engineering building. "Run, hide, fight" is standard protocol for active shooter situations. It means: Run, evacuate if possible; Hide, get silently out of view; or Fight, as a last resort, take action to disrupt or incapacitate the shooter if your life is in imminent danger. The university followed up with another tweet: "Continue to shelter in place in north campus area. Follow directions of Police on scene." The Columbus Police Department referred calls to Ohio State. A dispatcher for Ohio State police declined to comment. The media relations office said it wasn't immediately able to comment. Many police vehicles were at the scene. No other information was immediately available. With nearly 60,000 students at its main Columbus campus, Ohio State is one of the nation's largest universities.2016-11-29T05:09:36.000Z

There was an active shooter situation at Ohio State University, where at least nine people were wounded, with at least one person in critical condition. Above, you can see live coverage from Fox 10 above.

The Columbus Dispatch is reporting that nine people have been taken to the hospital and one suspect was killed. An OSU spokesman confirmed to the Associated Press that a suspect was shot and killed. NBC News reports that the suspect was identified as Abdul Razak Ali Artan, a 18-year-old Somali-born student, citing multiple law enforcement sources.

Ohio State Police also told the Associated Press that the attacker “purposely drove over curb into pedestrians, got out and stabbed people with butcher knife.” Now, an OSU official has said that this person did not use a firearm, but they have not searched the vehicle yet.

NOW: OSU official says, "No evidence of a firearm being used by this particular suspect at this point in time" https://t.co/G7ANHT8lbn pic.twitter.com/BoBgPojlPl

CBS News reports that two people were seen being brought out in handcuffs. CBS News also has live coverage available by clicking here.

UPDATE: Two people have been brought out in handcuffs after active shooter reported on OSU campus https://t.co/ph6QRKVBJ5 pic.twitter.com/7q9oPtHfa9

Police are still searching the area and there is SWAT activity at a garage. A witness told NBC 4 that a fire alarm was pulled and, as people were evacuating, “a car came along and started hitting those who evacuated.”

NBC News reports that some of the victims had knife wounds, not gunshot wounds. Police are still at the scene.

The shooting was first reported around 10 a.m. at Watts Hall. The Ohio State Emergency Management team told students on Twitter to “Run Hide Fight,” a reference to a Department of Homeland security plan to handle active shooter situations. They later told students to seek shelter.

Four of the victims are being treated at Wexner Medical Center and have non-life threatening injuries.

Here’s a student talking about the shooting: 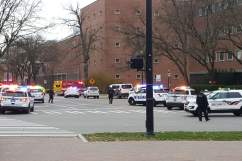 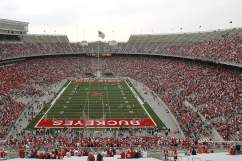 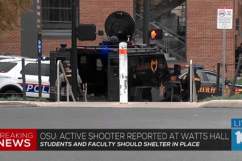 Read More
Breaking News, Ohio
At least nine people were attacked at Ohio State University in what was first called an active shooter situation. Here is live coverage of the situation.