They shooting in Beachwood Mall tho… ??? pic.twitter.com/MNBEes9GIp

There were reports of a panic at Beachwood Mall in Ohio, as local news stations reported that the mall was in lockdown after a food court fight.

There was no active shooter.

Panicked shoppers captured the stampede out the door on Twitter video. Be aware that some of the language is graphic.

I picked the wrong day to go to Beachwood mall ? pic.twitter.com/QMTPipGmYq

Fox 8 Cleveland said, though, that reports of an active shooter or gunfire were false. “Police on the scene tell Fox 8 News that reports of a gunman are not true,” said the TV station. Beachwood Mall is a major shopping center near Cleveland.

The reports of the pandemonium spread quickly on Twitter and in local media. Cleveland.com said that police used pepper spray to break up the crowd, and there was one pepper spray-related injury. The news site said officers from other jurisdictions were also dispatched to the mall, and that one 19-year-old man told reporters he was pepper sprayed. According to Cleveland.com, the panic started with a fight in the food court, and a juvenile was accused of assaulting a police officer who showed up to stop it.

MORE: Beachwood Fire Dept. tells us incident at @BeachwoodPlace is over and the mall is closed for the night. | @WKYC

The earlier reports of a shooting – proven false – circulated on social media, escalating the panic.

I'm still stuck inside beachwood mall. Someone was shot. No details. There was a stampede. https://t.co/dAO0IcqwqA pic.twitter.com/l6EOxu6p6t

It’s the second time in just a few hours that shoppers in a major shopping center fled in terror. The other incident on December 26 occurred at Hamilton Place Mall in Chattanooga, Tennessee. In that incident, shoppers fled in panic and hid in dressings rooms suspecting an active shooter but it turned out that someone, perhaps juveniles, had set off multiple firecrackers in a Pink store in the mall.

People also posted videos and photos to Twitter in the Beachwood Mall situation. Police were reportedly escorting people out of the mall.

As the panic subsided, and it became clear there was no shooter, people began expressing anger on social media that some people were ruining the mall environment for others.

It's time Beachwood put forth some new ground rules. This is the second "flash mob" to cause a disturbance in the mall. It's ridiculous 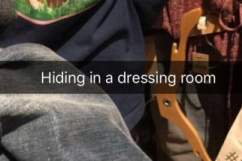 Loading more stories
wpDiscuz
5
0
Would love your thoughts, please comment.x
()
x
| Reply
A panic broke out at Beachwood Mall in Cleveland, Ohio after the mall was in lockdown. Active shooter reports are false. See video, photos and tweets from the shopping center.