Pioneering aviator and daredevil Bessie Coleman — the first African American and Native American woman to be a pilot —is being celebrated with a Google Doodle on what would have been her 125th birthday.

Coleman, who grew up in Texas, read about the flight of the Wright brothers and the first female American pilot, Harriet Quimby, during her childhood, dreaming of flying a plane herself. She saved up money and overcame racial and societal barriers to achieve her dream.

“If I can create the minimum of my plans and desires, there shall be no regrets,” she once said.

Coleman grew up in poverty and made a childhood vow to one day “amount to something.” She would eventually be called the “world’s greatest woman flier,” and earn fame around the world as a pilot and stuntwoman.

“I knew we had no aviators, neither men nor women, and I knew the race needed to be represented along this most important line, so I thought it my duty to risk my life to learn aviation and to encourage flying among men and women of our race who are so far behind the white race in this modern study,” she said.

Here’s what you need to know about Coleman:

Elizabeth “Bessie” Coleman was born January 26, 1892, in Atlanta, Texas, according to her biography on the website set up to honor her memory by her family.

Coleman had to walk four miles every day to school, which was segregated and just one room. She also helped her parents harvest cotton, according to her biography. With little work for a person of his race in Texas, Coleman’s father returned to “Indian Territory” in Oklahoma when she was 7 in search of better opportunities to provide for his family, so she spent most of her childhood being raised only by her mother.

“Because she was born with a drive to better herself, Coleman was an avid reader. Her mother ensured that the Coleman children made good use of the traveling library that came through two or three times a year,” her biography says.

Coleman studied at the Missionary Baptist Church for high school, and then was accepted to the Oklahoma Colored Agricultural and Normal University, now known as Langston University. She spent one year there, before she had to drop out and return home.

In 1915, at 23, she decided to move to Chicago to pursue her dreams of living a better life. 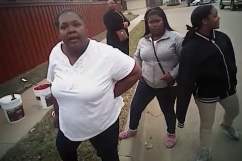 2. American Aviation Schools Would Not Admit Her Because of Her Race & Gender, So She Studied in Paris

While living in Chicago, Coleman saved up enough money to attend aviation school. But American flight schools would not admit her because of her race and gender.

So, Coleman, following the advice of Chicago Defender publisher Robert Abbott, headed off to France for her training, according to PBS’ American Experience:

Coleman learned French at a Berlitz school in the Chicago loop, withdrew the savings she had accumulated from her work as a manicurist and the manager of a chili parlor, and with the additional financial support of Abbott and another African American entrepreneur, she set off for Paris from New York on November 20, 1920. It took Coleman seven months to learn how to fly. The only non-Caucasian student in her class, she was taught in a 27-foot biplane that was known to fail frequently, sometimes in the air. During her training Coleman witnessed a fellow student die in a plane crash, which she described as a ‘terrible shock’ to her nerves. But the accident didn’t deter her: In June 1921, the Fédération Aéronautique Internationale awarded her an international pilot’s license.

She became the first African American, and also the first Native American, woman to receive a pilot’s license.

Upon her return to the United States, Coleman became a media sensation, especially in black-owned newspapers, but also in publications about aviation. The Air Service News wrote she was “a full-fledged aviatrix, the first of her race.”

In an interview with the Dallas Express, a black-owned paper, she said African Americans had to have pilots to keep up with the times, according to Voice of America.

“Do you know you have never lived until you have flown?” she told the Express.

3. She Became a Stunt Pilot & Was Nicknamed ‘Queen Bess’

Upon returning from flight school in France in 1921, Coleman realized she could earn money by entertaining others through her skills as a pilot. But she needed more training to learn how to do stunts, and again could not find anyone to teach her in America, so she went back to France for a year.

This week, we honor Bessie Coleman, as we celebrate her 125th birthday. #aviation #avgeek #bizav pic.twitter.com/zbib8Abhw1

Coleman began to work as a stunt pilot in 1922, barnstorming across the country performing “aerial acrobatics, wing-walking, parachuting, and diving,” according to BessieColeman.org.

She would only perform at shows if the crowd was desegregated and allowed to enter through the same gates, according to the National Aviation Hall of Fame.

Coleman earned the nickname “Queen Bess” and attracted large crowds at her shows.

This week, we honor Bessie Coleman, as we celebrate her 125th birthday. #aviation #avgeek #bizav pic.twitter.com/qmVv3mWsQs

She also gave lectures about flying at locations around the country, often to black audiences who at the time knew little about aviation.

She had the opportunity to get into the film industry as her popularity grew, and agreed to star in a film called “Shadow and Sunshine,” according to BessieColeman.org. But she walked off the set because she felt the script degraded her race, her biographer writes:

She had gladly accepted the role hoping it would help advance her career and provide her with money to establish her own flying school. But when she learned the first scene required her to wear tattered clothes, with a walking stick and a pack on her back, she refused to proceed. ‘Clearly, her walking off the movie set was a statement of principle,’ wrote Doris Rich. ‘Opportunist though she was about her career, she was not an opportunist about race. She had no intention of perpetuating the derogatory image most whites had of most blacks.’

Coleman survived a plane crash in 1923, shortly after saving enough money to buy her own plane. In front of 10,000 people, her plane’s motor stalled and nosedived into the ground.

She suffered broken ribs, a broken leg and multiple lacerations.

Coleman told a reporter after the crash, “tell the world I’m coming back.”

She left the hospital three months after the near-fatal accident and would return to the cockpit soon after.

4. She Died Tragically at Age 34 in an Accident During a Stunt Show Rehearsal

Coleman died tragically on April 30, 1926, in an accident during a rehearsal in Jacksonville, Florida, according to the National Aviation Hall of Fame.

She was only 34. Her mechanic and publicity agent, William Wills, was also killed.

The plane they were flying in was a recent purchase, and had been poorly maintained by the previous owner. Wills was piloting the plane, and Coleman did not have her seatbelt so she could prepare for a parachute jump.

About 10 minutes into the flight, the plane went into a dive and then spun around. Coleman was thrown from the plane at 2,000 feet and died upon impacting the ground.

Wills couldn’t regain control and died in a fiery crash. The crash was caused by a wrench that had slid into a gearbox, jamming it.

“Five thousand mourners attended a memorial service for Bessie in Orlando. An estimated 15,000 people paid their respects in Chicago – at the funeral of that little girl from Texas who dreamed of a better life as she picked cotton at the dawn of the 20th century,” according to the National Aviation Hall of Fame.

5. Coleman, Who Hoped to Build a Flight School for People of Color, Inspired Others to ‘Dare to Dream’

Coleman had dreamed of building a flight school to train future pilots of color.

“I decided blacks should not have to experience the difficulties I had faced, so I decided to open a flying school and teach other black women to fly,” she explained.

She was saving the money from her stunt shows to fund the school.

“Coleman was steadfast in her primary goal of opening a flying school for blacks in America. She knew that unless someone with money and vision helped her with her goal, she would have to finance the school herself,” BessieColeman.org writes. “She was a modern woman in a not so modern world. By the standards of the day, she should be married, at home having babies and at work in the kitchen. Ever the realist and perhaps the dreamer she went to work in the air.”

While her life was tragically cut short before she could achieve that goal, her story and accomplishments have inspired generations.

“Because of Bessie Coleman, we have overcome that which was worse than racial barriers. We have overcome the barriers within ourselves and dared to dream,” Lieutenant William J. Powell, himself an aviation pioneer, wrote.

Coleman was honored with a stamp as part of the U.S. Postal Service’s Black Heritage series in 1995.

“Bessie Coleman continues to inspire untold thousands even millions of young persons with her sense of adventure, her positive attitude, and her determination to succeed,” the USPS said in its stamp dedication.

Her legacy is carried on in several places that bear her name, including a public library in Chicago, roads at Chicago’s O’Hare Airport, a roundabout at the Nice Airport in France, the Bessie Coleman Middle School in Cedar Hill Texas and Bessie Coleman Boulevard in Waxahachie, Texas.

She was inducted into the National Aviation Hall of Fame in 2006.

“She had to go to France to find a school that would take her, as the skies proved easier to conquer than contemporary prevailing stereotypes,” the National Aviation Hall of Fame says. “Fulfilling her dream sparked a revolution and led the way for new generations of dreamers and future aviation legends, such as the Tuskegee airmen.”

Loading more stories
wpDiscuz
39
0
Would love your thoughts, please comment.x
()
x
| Reply
Bessie Coleman, the first female pilot of African American and Native American descent, is celebrated with a Google Doodle on what would have been her 125th birthday.