Actor James Burke-Dunsmore carries the crucifix whilst playing Jesus during The Wintershall’s The Passion of Jesus in front of crowds on Good Friday at Trafalgar Square on March 25, 2016 in London, England. (Chris Ratcliffe/Getty Images)

Today is Good Friday, where Christians the world over commemorate the crucifixion of Jesus Christ at Calvary. It is also known as Holy Friday, Great Friday, or Black Friday and comes the Friday before Easter. The date of Easter is always the first Sunday after the full moon following a spring equinox. This year, Easter is on Sunday, April 16.

Both Maundy Thursday and Good Friday are held on our around the week-long Jewish festival of Passover.

There are many similarities between the stories of Moses and Jesus.

Learn more about the history and origins of Good Friday here!

Arthur Uther Pendragon, a druid, waits for the sun to rise as he celebrates the Spring Equinox at Stonehenge on March 20 2009 near Amesbury, Wiltshire, England. (Matt Cardy/Getty Images)

2. It’s Unclear When Good Friday First Began to be Observed

Canadian filmmaker Simcha Jacobovici examines a burial niche inside the Talpiot tomb in Jerusalem, Israel in this undated handout photo from Vision TV. Jacobovici’s documentary, The Lost Tomb Of Jesus, produced by Oscar-winner James Cameron, includes the controversial claim that 10 ossuaries discovered in the cave in 1980 may have held the bones of Jesus, his wife Mary Magdalene, and possibly a son. (Photo by Associated Producers LTD via Getty Images)

It is unclear when the first Good Friday was held but the earliest allusion to the custom of Holy Week, which starts on Palm Sunday and ends with Easter, comes from the Apostolic Constitutions in the latter half of the 3rd century and 4th century from Syria.

The author(s) of the Apostolic Constitutions is unknown, but the work claims to have been written by the Twelve Apostles. However, just like the gospels, it was common in ancient times to remain anonymous and attribute work to historical figures, writes Religion Online.

The first Christian Roman emperor Constantine is charged with setting the modern Easter date in June of 325 A.D. at the ancient city of Nicaea (modern Iznik, Turkey), writes the Oxford University Press. The problem was, the only thing everyone knew about the date of Jesus’ crucifixion was that it happened around the Jewish celebration of Passover. They write:

Since the date of Passover, then as now, is celebrated in accordance with the Jewish calendar, the correlation with the Julian calendar used by Christians and most other inhabitants of the Roman Empire was always inexact. Some Christians believed that the best way to solve the problem was to celebrate Easter on the first day of Passover according to the Jewish calendar, another group held that Easter should be celebrated on the first Sunday after the opening of Passover, while yet another group felt that the timing of the Christian festival should not be determined by the timing of Passover and should instead be celebrated on the first Sunday after the first full moon following the Vernal Equinox.

Easter is always the first Sunday after the full moon following a spring equinox, or vernal equinox.

This year Passover begins at sundown on Monday, April 10, and runs through Tuesday, April 18.

Just like the date of the original Good Friday, the etymology behind Good Friday is also contested.

Your Dictionary states that the “Good” of “Good Friday” comes “from good, pious, holy (obsolete).” However, others claim that is a corruption of “God.”

In other Germanic languages like German, Good Friday is translated to “Mourning Friday” or “Silent Friday.”

There are two facts about Jesus that aren’t up for debate by historians: Jesus was baptized and crucified.

For the crucifixion, there are historical references that aren’t in the Bible. The Roman historian and senator Tacitus referred to Jesus, his sentencing to death by Pontius Pilate, and the existence of early Christians in Rome in one page of his final work, Annals (written ca. A.D. 116). The text reads:

[Roman Emperor] Nero fastened the guilt and inflicted the most exquisite tortures on a class hated for their abominations, called Christians by the populace. Christus, from whom the name had its origin, suffered the extreme penalty during the reign of Tiberius at the hands of one of our procurators, Pontius Pilatus, and a most mischievous superstition, thus checked for the moment, again broke out not only in Judaea, the first source of the evil, but even in Rome, where all things hideous and shameful from every part of the world find their centre and become popular.

Pliny the Younger, the Roman governor of Bithynia et Pontus (now in Turkey), also wrote about Christians and referenced their leader. Around 112 A.D., Pliny wrote a letter to Emperor Trajan asking advice on how to deal with Christians. According to Be Thinking, Pliny wrote:

They were in the habit of meeting on a certain fixed day before it was light, when they sang in alternate verses a hymn to Christ, as to a god, and bound themselves by a solemn oath, not to any wicked deeds, but never to commit any fraud, theft or adultery, never to falsify their word, nor deny a trust when they should be called upon to deliver it up; after which it was their custom to separate, and then reassemble to partake of food – but food of an ordinary and innocent kind.

Roman historian Gaius Suetonius Tranquillus also wrote about Jesus and early Christians, whom he still referred to as Jews in 41 to 54 A.D.

5. There Are at Least 2.2 Billion Christians

Iraqi Christians light candles inside a shrine in the grounds of Mazar Mar Eillia (Mar Elia) Catholic Church, that has now become home to hundreds of Iraqi Christians who were forced to flee their homes as the Islamic State advanced earlier this year, on December 12, 2014 in Erbil, Iraq. (Matt Cardy/Getty Images)

For at least 2.2 billion people, today is a day of solemn remembrance for the crucifixion of Jesus Christ. According to NPR in 2010, Christianity is the largest observed religion in the world with 31 percent of people adhering to it.

For this large population, today will be remembered in a variety of ways. Catholics will fast, Protestants will light the Tenebrae, and nearly all denominations will observe the Stations of the Cross.

Holy Week culminates with the observation of the resurrection of Jesus on Sunday. 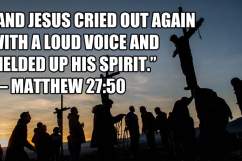 Read More
Christianity, Holidays, Religion
Follow Heavy ↓
Today is Good Friday, where Christians the world over commemorate the crucifixion of Jesus Christ at Calvary. It is also known as Holy Friday, Great Friday, or Black Friday and comes the Friday before Easter.