A string of mostly random serial shooting murders terrified the Phoenix community for two years, but now authorities have arrested Aaron Juan Saucedo in the spree.

Some in the community called the spree shooter the “Monster of Maryvale.”

According to AZFamily.com, Phoenix Police Chief Jeri Williams announced on May 8 that Saucedo has allegedly been “linked to nine murders and 12 incidents between August of 2015 and July 2016,” in what was dubbed a “serial shooter case.”

Williams said in the news conference that investigators found “probable cause to arrest 23-year-old Aaron Saucedo for these crimes.” Already sitting in the jail accused of one of the murders, Saucedo was “rebooked into the jail for 26 additional felony crimes,” the chief said, including homicide, aggravated assault, and drive by shootings.

The killer – who struck randomly in the dark of night – shot people outside their homes. Previously, authorities had said the serial killer had taken seven people’s lives and injured 2 others, Fox News says. Authorities say they don’t believe Saucedo is tied to a separate string of Phoenix freeway shootings.

A previously released police sketch of the shooting spree killer looks strikingly like Saucedo, who has not yet been charged with the crimes.

Among the victims, the Phoenix killer “ambushed and fatally shot two women and a 12-year-old girl in their driveway,” said NBC News.

1. Saucedo Is Already Facing Charges in the Shooting Death of One Man & Used to Be a Public Bus Driver

Another case linked to Phoenix serial killer, who is responsible for at least seven deaths https://t.co/yTmHS8QuI3 pic.twitter.com/iiBWKRKsce

Ballistics evidence in one of the cases led to criminal charges against Saucedo and set police on the trail of trying to see whether he was the spree shooter.

According to AZFamily.com, Saucedo was taken into custody in April and charged with the shooting death of 61-year-old Raul Romero, who “was discovered shot at an apartment complex.” He has pleaded not guilty in that 2015 murder, the news site reported, and authorities now say it’s part of the shooting spree.

The Romero case was the first in the string of spree shootings, according to The New York Times. It’s also the only shooting in which there’s been a reported personal link between Saucedo and victim; according to The Arizona Republic, Romero was his mother’s boyfriend. Authorities say they think the other shootings were random.

The Arizona Republic reported that Saucedo was a public bus driver in 2015 and was working for a temp agency more recently doing labor jobs. The newspaper reported he was raised in the Phoenix area, and “yearbook photos show he attended North High School in Phoenix his freshman and sophomore years. The yearbooks give no indications that Saucedo participated in any high school clubs or activities.”

You can watch the May 8 police news conference here:

In the case of the shooting spree, authorities said previously that the killer didn’t always use the same car; witnesses have described a white Cadillac or Lincoln and a “a late ’90s or early 2000s 5 series BMW,” said NBC. This led police to consider whether the gunman “works as a mechanic or on a used car lot” or somewhere else where he would have easy access to multiple cars, NBC said.

Most of the attacks “occurred in the blue-collar Maryvale neighborhood,” said Fox News, although not all of them. CNN described the area as a “Latino enclave” that law enforcement experts think the killer knows well.

CNN says some people are calling the killer the monster of Maryvale or the serial street shooter.

2. The Killer Attacked People Who Were Standing Outside Their Homes or Sitting In Cars & Victims Were Shown Saucedo’s Photo in an Array

Police say they have gathered evidence against Saucedo in the spree, including by putting his photo in an array and showing it to surviving victims, AZFamily reports. The site added that Saucedo drove a car similar to that described by victims and that his gun traced to the Romero murder through ballistics tests.

By now, most of you have seen news reports that a person of interest has been identified and related to the Serial Street Shooter series. Investigations of this complexity are rare and take time to properly investigate. We cannot allow the release of unconfirmed information to jeopardize justice for anyone. The investigation and discovery of evidence will guide our timeline as we move forward. We, as your police department, owe that to our victims and to our community. Trust that we are aggressively investigating all leads and information related to this case. As promised, we will continue to share any and all information that will help keep our community safe. Until this case is resolved, we ask everyone in our community to continue reporting suspicious people and activity.

However, in the news conference on May 8, flanked by the mayor and other members of law enforcement, the chief released Saucedo’s name and said he was under arrest for the shootings.

Police say the killer’s M.O. was to attack victims “as they stood outside their homes or sat in vehicles after dark,” according to CBS News. The killer either fired while sitting in a car or stepped out of a vehicle and fired, said CBS.

Police have said there is no evidence to connect the killer to 11 freeway shootings in Phoenix in 2015.

CNN reported in April that charges were dismissed against a man, Leslie Allen Merritt Jr., who was charged in those Phoenix-area crimes. His lawyer has said he was wrongfully accused.

3. The Mayor Called the Arrest a ‘Good Day’ in Phoenix & the Police Chief Sought to Put Attention Back on the Victims

“For more than a year now, the Phoenix Police Department has been carefully and methodically working this case. When it became apparent there was a serial shooter terrorizing our community, our officers did not rest.”

The mayor said officers had a clear mission: “Bring this killer to justice and get it right.”

He said that tens of thousands of hours were put into the case by officers. There were 3,300 silent witness tips, and “those tips led directly to where we are at today,” said the mayor.

The police chief said she wanted to focus on the victims in the case. She called the case “extreme in nature.”

“This case plagued our community for more than a year and left behind a trail of victims that included mothers, sons, brothers, sisters, and families still mourning the loss of their loved ones,” she said, adding that detectives worked “tirelessly…we recently connected some additional crimes.”

She also said that tips were instrumental in the case.

“Tips from within our own community led us to a possible suspect,” said the chief, adding that the investigation has included everything from witness statements to ballistics to surveillance videos.

Police had previously turned to the community for help because they didn’t have many leads, says The AP, adding that a reward was being offered for information leading to an arrest.

People who have information can contact the Phoenix Police Department Violent Crimes Bureau at 602-261-6141 or Silent Witness at 480-WITNESS, said AZCentral.com.

4. The Killer Allegedly Told Police He Changed His Appearance & He Was Previously Described As a ‘Lanky Man in His Early 20s’

Phoenix fears new attacks amid serial killer manhuntPolice are hunting for a serial killer terrorizing the Phoenix area. In the last four months, seven people were shot and killed. Two other victims were wounded. Investigators believe all of the attacks are connected. Carter Evans reports from Phoenix.2016-07-14T11:57:34.000Z

Saucedo is accused of telling police that he changed his appearance after news coverage of the sketch and serial shootings, The New York Times reported. He also stopped driving his BMW once police released information about the suspect’s vehicle, according to the newspaper.

In July, CNN described the man as “a lanky Hispanic male under 5 feet, 10 inches tall,” according to Sgt. Jonathan Howard of the Phoenix Police Department.

However, in the same story, CNN said that witnesses had described the man “as a light-skinned Latino or white man in his 20s.”

According to The Arizona Republic, “Saucedo’s gun was one of eight 9 mm Hi-Point handguns that the Arizona Department of Public Safety had seized from Valley pawn shops for testing while investigating a series of freeway shootings in 2015.”

5. The Serial Killer’s Victims Do Not Appear Connected to Each Other, Police Say

CNN said police cannot find any link among the victims of the spree shooter, who used a semi-automatic handgun to commit the crimes. Other than Romero, there’s been no personal link alleged between them and Saucedo, either.

In addition to Romero, the victims include Diego Verdugo-Sanchez, Krystal Annette White, Horacio de Jesus Pena, Manuel Castro Garcia, Maleah Ellis, Angela Linner, and Stefanie Ellis. You can see photos of the victims here. The Ellises and Linner were shot together.

A Go Fund Me site for Maleah Ellis’ family says, “although only at the tender age of 12, she was able to touch the lives of so many with her contagious smile, cheerful personality and unique ‘Maleah’ attitude.”

The killer appeared to be targeting Hispanic and African-American victims, but they ranged in age from 12 to 55, says CBS 5 in Arizona. The first victim after Romero, a 16-year-old boy, was shot on March 17 but survived, said KTVK. 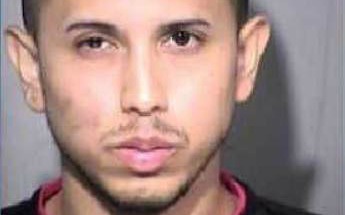