Robert Fox and his passenger were attacked by a manic woman with a knife in a Panda Express parking lot in Billings, Montana. The woman claimed that the men had tried to run her over while backing up. The woman has a weapon and appears to be mentally unstable.

Fox starts filming while on the phone with the police.

The woman can be seen filming Fox back. She then repeatedly stabs Fox’s Ford Excursion and bangs her head on it. Fox notes that she may have “lost a tooth.”

While the woman is attacking, another woman drives up in a blue GMC Envoy and accuses Fox and his passenger of bothering the woman, who starts calling the men the N-word. The woman then stabs their car tire.

Fox tells the police that she might be on something, possibly pills.

As the woman turns more violent and starts smashing Fox’s car windows more he shouts at the police, “Is somebody going to come over here? If not, I’m going to take care of this.”

The video comes from May 10 and was originally shared on YouTube by the username “A.R.” However, the video has since been removed from the channel but can be watched above. In the comment section of the video on YouTube, it was revealed by the original publisher that the woman in the blue GMC Envoy was the manic woman’s mother. The rest of the story, as written by the author, reads:

The two women end up jumping in their vehicle just before the cops arrive. The crazy lady jumps out of the car and run into sears. The cops ran after her and handcuffed her after she put up a fight. She was calling them the N word and was trying to say she was raped. The cops wernt buying her side of the story obviously. She left her phone behind. The Guardian was pleading for her daughters phone back. She was smart not to lay her hands on them. The phone was giving to the cops. The cops said she was going to be admitted to the hospital. The vehicle did have a scratch on the side where the crazy lady carved her knife into. But it isn’t anything that can’t be buffed out. And the tires are very good high end quality tires & brand new with thick tread. She didn’t do any damage to them. A police report was definitely filed. I ask that yall Please be respectful on my youtube chanel. To those that are very disrespect :Your poor choice of words just shows to me how foolish and immature you are. I will take this video down of it continues. I don’t tolerate ignorant people. Thank yall.﻿” 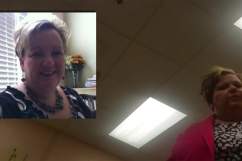 Loading more stories
wpDiscuz
17
0
Would love your thoughts, please comment.x
()
x
| Reply
Robert Fox and his passenger were attacked by a manic woman with a knife in a Panda Express parking lot in Billings, Montana. The woman claimed that the men had tried to run her over while backing up.