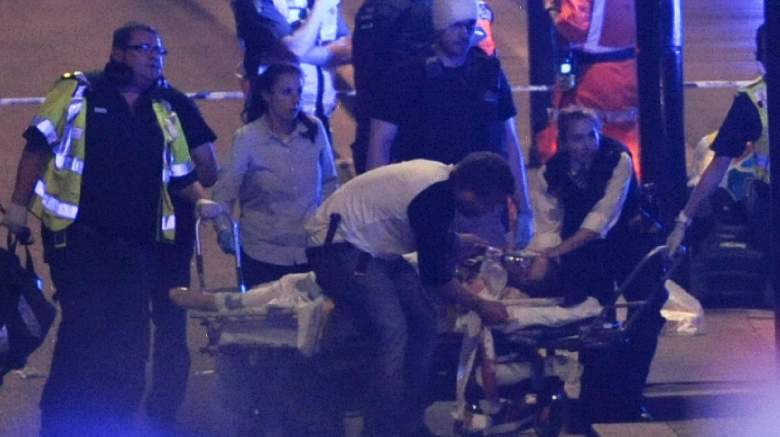 London is reeling from a likely coordinated terror attack in which a van plowed into pedestrians on London Bridge and then a “gang” of three suspects began knifing people at Borough Market.

Videos were posted from the scene:

Shots fired and someone stabbed near London Bridge… if you're in the area be weary pic.twitter.com/DU720qvLZC

UK Express obtained exclusive video of the terrorists calmly walking through the market.

The van struck several people, knocking one person about 20 feet into the air. A witness told CNN: “It swerved into oncoming lanes before hitting a bus stop and coming to a stop. Within my line of sight, there were five or six people on the ground that were not moving.”

The Sun reported that as many as seven people were feared dead as a result of the attacks and up to 48 people were injured. The attacks occurred late in the evening in England, around 10 p.m. All three suspects were killed by police, and witnesses said the terrorists shouted that they were committing the attacks for “Allah.”

Footage from #LondonBridge shows people being escorted away by police with their hands on their heads https://t.co/uqQwAuKckJ pic.twitter.com/t7VpDNgPKM

According to The Sun, the terrorists arrived in a gang of three. “Staff at a packed pub in London Bridge locked the doors as the gang tried to smash their way in. Witnesses saw one man stabbed in the chest five times,” reported The Sun.

Police raided a flat in Barking.

“The gang had metal canisters strapped to their chests and two were gunned down – believe killed – by armed police.” Those canisters were hoax explosives, police said.

Photos from the scene showed pedestrians walking down the street with their hands over their hands as police hunted for the terrorists.

The Sun reported that a third terror attack was reported at the same time in the Vauxhall area of London. However, police later said they don’t think that was related.

British Prime Minister Theresa May has said the attacks are being treated as terrorism, and American President Donald Trump pledged all of his support to the UK in the wake of the attacks. 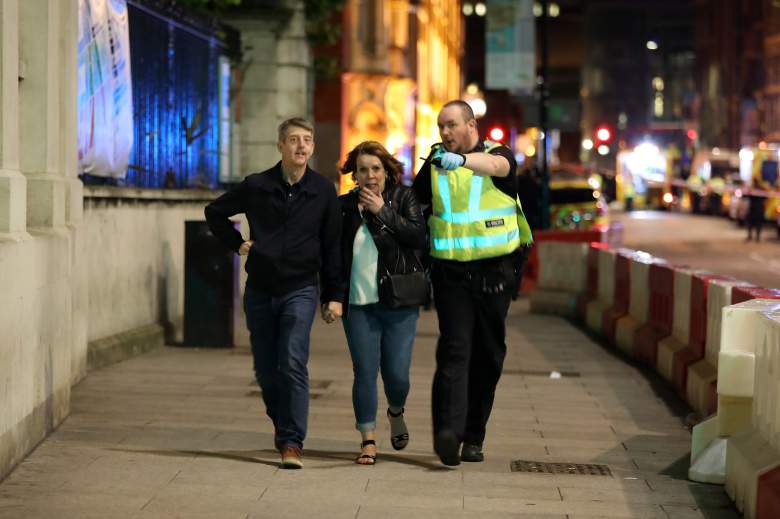 A police officer escorts members of the public to safety at London Bridge on June 3, 2017 in London, England. Police have responded to reports of a van hitting pedestrians on London Bridge in central London. (Getty)

ISIS-influenced terrorists have increasingly turned to vehicles as a weapon in terrorist attacks through out Europe. The modus operandi was used in Nice, France, Berlin, Germany, and in the UK Parliament attack on Westminster Bridge. London Bridge, as with Westminster, is a high-value target often crowded with pedestrians.

Exact casualty figures were not yet known. According to CNN, a “witness on the bridge told CNN the van mowed down pedestrians as it sped south across the bridge, leaving bodies lying in the roadway. Another witness, who was in the cafe, said a man with a ‘massive knife’ entered the restaurant at Borough Market, just south of the bridge, and stabbed two people inside. The patrons sheltered in the basement.”

The British terrorist attacks come as the country is still recovering from the suicide bombing at an Ariana Grande concert in Manchester, England.

London’s mayor called the latest attacks deliberate and cowardly, according to CNN.