A screenshot of Phil Stair as he appears in the activist recording video. (YouTube)

Phil Stair, a government official working on the Flint, Michigan housing crisis, has resigned after audio surfaced that allegedly captured him using a racial slur to refer to African-Americans.

The water crisis in the African-American majority city has already come to symbolize racial disparities in America. The comments allegedly made by Stair – which were recorded and published online by a community activist – are causing renewed tensions.

The community group, Truth Against the Machine, published the audio on its website. You can listen to the audio, which was posted to YouTube, below, but be aware that it includes graphic language.

Stair is accused of making the comments during a conversation with Chelsea Lyons, who is a Truth Against the Machine reporter and environmental activist, the website reports.

He’s accused of saying, “Flint has the same problems as Detroit—fucking ni**ers don’t pay their bills, believe me, I deal with them.” Truth Against the Machine reports that the conversation occurred on May 26. You can listen to a snippet of the audio above, and the full 20-minute conversation below later in this story.

Stair then added, according to the audio, “I don’t want to call them ni**ers, sh*t I just went to Myrtle Beach, 24 guys, and I was the only white guy; I got friends, I mean, there’s trash and there’s people that do this sh*t. They just don’t pay their bills. Well, Detroit, didn’t collect on their bills, so they charged everybody else, but- Flint- Flint had to pay their bill to Detroit.”

Stair is also accused of disparaging some areas of Flint, saying, “Well, I call the south side, where we were, that’s the new east side cause we [land bank] tore most of it down; all them derelict motherf*ckers have moved down to the south side. They’re destroying that.”

2. Stair Worked for an Organization Involved in the Foreclosed Home Crisis in Flint

According to Time Magazine, Stair has now resigned from his position. He worked as “sales manager of the Genesee County Land Bank, a government organization that manages tax-foreclosed properties,” Time reported.

The Flint water crisis is considered a national crisis as residents in Flint still can’t reliably drink the water without filters, and children getting their blood tested for lead levels is a regular occurrence. It’s not uncommon to see crumbling home after abandoned, crumbling home in the city, especially in the area around the old Buick City GM plant.

Stair also allegedly said in the audio, “F*ckin’ deadbeats who, when they tear the houses down, they gotta go somewhere, they go on the south side. It just shifts- it just shifts the sh*t. The people are still the people, they f*cked the houses up, then they leave and when we tear em down, they just go somewhere else and just f*ck those houses up. I bought my house for $23,000 dollars in 1981, and they sold that house right there for $4,000 dollars about four years ago. So, 30 years it didn’t… but… it doesn’t owe me anything.”

The community activist involved in the Stair recordings told MLive that she has concerns about Land Bank, which was Stair’s employer.

According to MLive, Land Bank is the largest property owner in Flint. “The agency takes over tax-foreclosed properties, carrying out demolitions, rehabilitations and sales,” MLive reported, quoting Lyons, the activist, as saying, “The Land Bank is taking up all of the properties in Flint… They are pushing people out of neighborhood.”

MLive reported that Michele M. Wildman, executive director of the Land Bank, confirmed she had accepted Stair’s resignation after the audio surfaced. She also apologized for his comments to a government board, reported MLive, saying, “I am deeply troubled by (the statements). The citizens of Flint deserve to have trust in their public officials.”

4. The Recordings Were Made After the Activist Received a Tip That Stair Was in a Bar

Lyons told MLive that she and another woman were involved in the conversations with Stair.

“The recording of Stair took place over two days and started after Lyons and another woman met him after having received a tip that he was at a local bar,” MLive reported.

The full audio is 20 minutes long, and it can be listened to above.

On Facebook, Stair says he went to Michigan State University and graduated from high school in 1971 from Mt. Clemens, Michigan. His page contains typical posts about family and sports.

5. Flint Has a Crisis of Foreclosed Homes 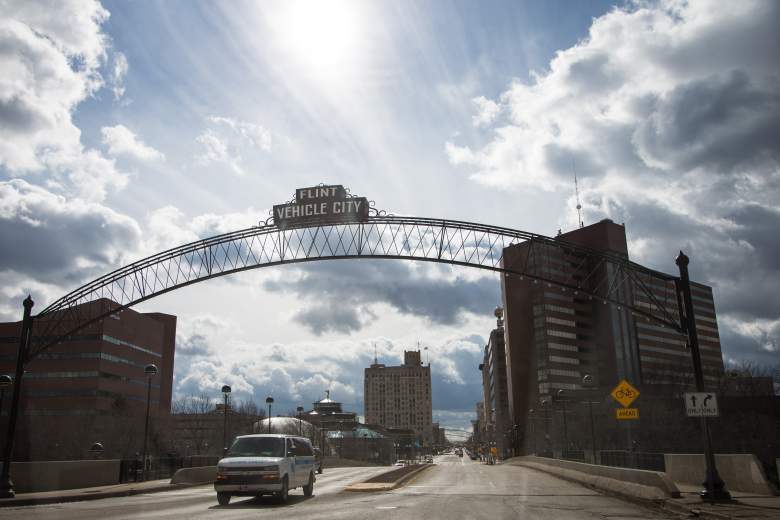 General View of downtown Flint as well as the famed arches bearing the city’s nickname “Vehicle City” on March 17, 2016 in Flint, Michigan. Flint continues to work through the effects of water contamination. (Getty)

The foreclosed home crisis has been a flashpoint in a city that still deals with water checkpoints after toxic water sickened many.

In May, Huffington Post reported that thousands of people faced losing their homes in Flint if they didn’t pay their water bills. That’s despite the fact that many residents still refuse to drink the water.

“The city warned 8,000 Flint homeowners that they could get slapped with tax liens if they’re more than six months behind on their water accounts. Failure to pay a tax lien could eventually result in foreclosure,” reported Huffington Post.

Many people in Flint say they get rashes when they shower in the water, even though the government declared an emergency in Flint in 2016 and claims the water quality improved since that time. The water crisis contributed to plummeting home values for some residents.

You can listen to Lyons discussing the Stair audio recordings here: