The Blue Whale Challenge is a sinister game that has been making the rounds on social media, encouraging teens to undergo a series of 50 challenges that culminate in ultimately killing themselves. Many wondered if the game, which was reportedly growing in popularity outside the United States, might have actually been a hoax. But parents of a teen from Texas, Isaiah Gonzalez, have gone to the media to share that they believe their son killed himself after participating in the challenge. Now other families of teens in the United States are saying the same.

Snopes lists deaths from the Blue Whale Challenge as unverified, but the family of Isaiah, who livestreamed his suicide on Facebook, say it’s very real.

How many people have died from the challenge so far? View the list below for details. This is a developing story that will be updated.

Four American families have revealed to the public that they believe their children died as a result of the Blue Whale challenge. The families are warning other parents to be on the lookout for signs that their children may be participating.

Isaiah Gonzalez, a 15-year-old from San Antonio, Texas, committed suicide on Saturday and broadcast the actions on a Facebook livestream, Fox News reported.

His mother, Angela Gonzalez, said that she believed he was assigned daily tasks for 50 days from a Blue Whale social media group. The tasks included actions like carving things into your arm, and he was threatened if he didn’t follow through.

Isaiah hung himself in a bedroom closet, with a cell phone nearby to film himself, his parents said. They said he was sending photos of his completed tasks to his friends, but his friends thought it was a joke, The Washington Post reported.

A fundraiser has been started on GoFundMe to support Isaiah’s family.

A 16-Year-Old Girl from Atlanta, Georgia

Parents of a 16-year-old girl from Atlanta, Georgia, are also sharing that they believe she killed herself because of the challenge, CNN reported. They are keeping her identity a secret for privacy reasons. CNN’s story states that it’s still unclear if the game really exists.

The girl’s parents said that she drew paintings for an art show at school, and the paintings seemed to give clues that she was participating in the challenge. One of the paintings looked like the skeleton of a blue whale, her brother said.

Her mom said that some of the things her daughter did, such as stepping on a roof, seemed to coincide with tasks connected to the game.

Because the tasks circulate in Facebook groups and in apps like Snapchat, it has been tough for authorities to nail down conclusive proof of the game’s existence.

Sandy Cadena of Wichita Falls is convinced that her daughter, Natasha, succumbed to the Blue Whale Challenge, USA Today reported. Natasha hung herself on July 4 and her phone was found near her feet. Sandy said Natasha was doing hurtful things to herself, such as cutting herself, taking videos, and showing them to a woman named “Loretta” from France. Sandy also said her daughter was paying money to this woman (payments aren’t known to be part of the challenge, typically.)

Sandy said that after Natasha killed herself, she learned about it when Loretta called her. “Hey, you might want to go check on your daughter. I think she just killed herself,” the woman told Sandy.

Sandy added that she didn’t think the detectives believed her when she said her daughter’s death was related to the challenge.

One of the latest victims was Chase, a 12-year-old boy in Oklahoma who took his life in August. His grandmother, Linda Miesner, said he loved animals, playing with legos, and was very empathetic. He was loved at home but bullied at school, she said. The LeFlore County Sheriff said he committed suicide while playing the Blue Whale Challenge. During their investigation, they found two girls who were taking part in the challenge at Chase’s school. Both girls are now getting help.

Deaths Outside of the United States

The game seems to originate from Russian social media, The Washington Post reported. There, authorities believe that at least 130 young people have committed suicide as a result of the challenges.

Motherboard reported that the very first incident might have been in 2015, when a girl named Rina Palenkova shared a selfie just before stepping in front of a train.

One student told SkyNews that he participated because he was “curious and bored.” He said he was assigned a taskmaster or curator, who sent him the tasks, and they included self-mutilation. His parents stopped him from doing the final task, which was to throw himself off a 20-story building.

The student said the manipulation was so deeply psychological that it was hard to say no.

Radio Free Europe, in February, said the game existed but there was no concrete proof of any associated deaths. The reporter talked to participants online, but none of them had advanced very far through the challenges.

However, two people were arrested in Russia for ties to the game. A 21-year-old was arrested for urging at least 16 teen girls to kill themselves, and a 26-year-old was taken into custody for urging at least 30 teen girls to do the same. The 21-year-old, Philipp Budeikin, is widely believed to be the person who started the challenge. He told police he believed he was “cleansing society,” Metro reported. Police said he started his tactics in 2013 and refined them over time.

This article will be updated as more information is available. If you know anything about the challenges, please leave a comment below. 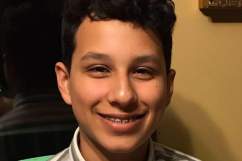 Loading more stories
wpDiscuz
16
0
Would love your thoughts, please comment.x
()
x
| Reply
The Blue Whale Challenge encourages teens to kill themselves. But how many people, and how many Americans, have really died from the game? Find out more here.