It only lasted a few days, but Fox News’ Sean Hannity and CNN’s Jake Tapper reignited their feud on Twitter.

Just days after Tapper called out Hannity for no longer being named the recipient of a prestigious conservative media award, the Fox News host asked his viewers to troll the CNN host with their opinions of him and his reporting, which Hannity labeled as “fake news.”

Hannity, who’s taken aim at both MSNBC and CNN on Hannity, requested his July 24 audience to message several employees of both news networks. He asked them to tweet directly to Tapper about his interview with new White House Communications Director Anthony Scaramucci and to message reporter Brian Stelter and company Jeff Zucker about the network’s “Russia obsession” and its “lack of desire to be fair and balanced.”

So, many on Twitter heeded Hannity’s advice and decided to do just that to the three. But instead of bashing them for “being fake news,” many of the tweets showed admiration for their work.

I've been told @seanhannity wants everyone to tweet their thoughts about @jaketapper.

I think he's a journalist.

I think Sean is a hack.

@jaketapper Thank you for being a real journalist and bringing the truth to light. @seanhannity is a fool.

A few words on @jaketapper as requested by @seanhannity:
Jake is an upstanding journalist with an admiration for truth and disdain for spin

Love that Hannity is wasting his time going at @jaketapper. While Jake is busy fearlessly reporting the news. Check mate.

@jaketapper you are a saint

Tapper chimed in with a tweet of his own following the response.

I don't think that one turned out the way he intended. Thanks, everyone. Very kind of you. pic.twitter.com/7ANilJ6scE

That’s not the first chapter in the Hannity/Tapper saga. Just last week, Tapper reported that Hannity would no longer be the recipient of the conservative Media Research Center’s William F. Buckley Award for Media Excellence.

Buckley founded the National Review and died in 2008. Tapper said that his son, best-selling author Christopher Buckley, “expressed great dismay” that Hannity was selected to receive the honor.

“Giving an award in his name to Hannity — a pugnacious talk radio host who has shared conspiracy theories on his popular cable news show — had caused hand wringing among some conservatives,” Tapper wrote.

Hannity wasn’t exactly thrilled with Tapper’s reporting and said that he was unable to attend because of a scheduling conflict.

Hey Fake News Jake, I was offered an award, I was unable to attend, and I respectfully turned it down. https://t.co/z69QXiW7AZ

If @NRO "Never Trumpers" or WFB's son were upset about me receiving the award, they never told me. Now I'm really glad I said "No thanks" https://t.co/33BFWgnlEj

Fact; "Awards" are BS ways to raise $. The only "Award" I care about is serving my audience, the support of my audience, and saving the USA https://t.co/YcYJTeSUto

CNN said it contacted the Media Research Center, and a spokesperson said that “it’s my understanding there was a scheduling conflict.” But it says later on in Tapper’s story that sources said “the MRC leadership discussed ways to allow Hannity to save face by acting as if a scheduling conflict would prevent him from accepting the award.”

A) You are a liberal hack and not a journalist. B) @NRO is "never trump" like you. C) Chris Buckley never called me. D) I declined-conflict https://t.co/HbURUJJXsN

The feud between the two certainly doesn’t seem like it’ll be dying down anytime soon. 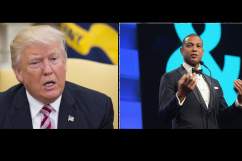