National Hurricane Center This is the probable path of the storm center as of Friday midnight.

Here is how Harvey is expected to impact the city.

National Weather ServiceRadar of Harvey as of 12:30 p.m. CST.

Landfall is currently expected about 250 miles southeast of Corpus Christi around 1 a.m. on Saturday. It might reach 120 mph by that point. But because a hurricane’s path can change and is unpredictable, hurricane warnings are in place just north of Port Mansfield to Sargent, including Corpus Christi. We’re already seeing rain on the coast.

After it makes landfall, some experts are predicting that Harvey may be stall briefly and just circulate in place for two days. It may possibly re-emerge over the Gulf after two days and make landfall again in Louisiana. But this is all uncertain at the moment, Weather.com advised.

Water levels are already one to two feet above average tide levels in Corpus Christi and Port Aransas.

One of the bigger worries are storm surges, which could be up to 12 feet with waves as high as 20 feet. Rain will be 10 to 20 inches on average, but some areas could get up to 30 inches, especially if the storm stalls. The NHC issued its first public storm surge warning, including the Texas coast from Port Mansfield to High Island.

Here’s a rainfall forecast in inches for Days 1 through 7 as of Thursday evening, provided by the National Hurricane Center:

According to the National Weather Service as of early Friday morning, the following was forecast for Corpus Christi for Friday through Wednesday:

Numerous thunderstorms are expected today within the bands of Hurricane Harvey. Strong wind gusts in squalls will be possible over the coastal plains and coastal waters. Tornadoes or waterspouts will also be possible.

DAYS TWO THROUGH SEVEN…Saturday through Thursday

Although Harvey will weaken, Harvey is expected to meander near South Texas over the next couple of days, resulting in a continuance of heavy rainfall, flash flooding and strong winds. Harvey is forecast to begin to move away from South Texas early next week, gradually bringing diminishing rainfall chances through the rest of the week.

Of course, if the track of the storm changes even slightly, this could have a significant impact on how much rain and wind Corpus Christi sees.

Corpus Christi Mayor Joe McComb only called for a voluntary evacuation, but urged residents in the low-lying areas to evacuate to higher ground. He said clean water and electricity could be at risk.

If you’re in one of these low-lying areas that are indicated on the map, then you’re urged to evacuate to higher ground:

Here are a few more updates from the City of Corpus Christi as of 12:30 p.m. CST. You can follow them on Twitter here.

To keep up with the latest on Hurricane Harvey, follow the National Weather Service’s page for Corpus Christi here. 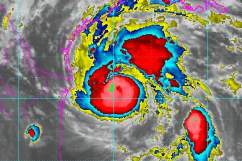