Getty Local residents line up at the H-E-B gas station in Austin, Texas on August 31, 2017, after management reported that this location would soon be running out of fuel.

Residents of Dallas, Austin, San Antonio, and other locations from Texas and beyond — even to North Carolina — have been posting about gas shortages from Hurricane Harvey. They’ve been talking about going to gas stations only to find that the lines are extra long and many of the fuel lines are empty.

But is there really a gas shortage?

According to officials, the answer is “no.” There’s really no need to panic, and the panic itself can worsen a temporary shortage. Yes, some locations and some gas stations may be lower on fuel for Labor Day weekend travelers. But there’s not a true shortage, officials say.

Yes, some stations are running out of gas temporarily. In DFW, for example, QuikTrip is going to stop selling gas at about half of its locations because of a dip in supply, WFAA reported.

Other gas stations are reporting long lines and temporarily running out of fuel, such as the Mobil station in Val Alstyne, which ran out at 11:30 p.m. Wednesday and then was able to refuel at 4:15 a.m. Thursday.

But it’s not because there’s a true shortage.

Texas Railroad Commissioner Ryan Sitton told WFAA that some of the temporary shortages are because consumers are putting extra demand on fuel and some gas stations are having a tough time keeping up with the demand. He told WFAA:

There’s plenty of gasoline. This will subside.”

The rumors about shortages started because refineries along the Gulf Coast had to shut down because of the hurricane. This led to increased demand from worried consumers. Some stations are raising prices because they want to keep their supply of gas, and with so many stations running out at once due to panicked purchasing, it’s taking longer for them to resupply their gasoline.

He added that about 3 million refined barrels in Texas are offline. But the U.S. has 230 million barrels in storage. He said even if that 3 million was offline for a month, it would still be less than what’s in storage. And some refineries, like some in Corpus, are already working on going back online.

Douglass Distributing confirmed the same, according to KXII. They released a statement which said, in part:

Douglass Distributing and Lone Star Food Stores would like to educate everyone on the current fuel shortage that we are experiencing. The shortage is a result of a southern refinery shutting down temporarily during the storms of Hurricane Harvey. We want everyone to know that we still have access to plenty of fuel — the lines that our delivery trucks are waiting in are just much longer because of the refinery shut down. There is NO outage. There is fuel. Each delivery is just taking longer right now.

We want to assure everyone that we have all of our delivery trucks out running 24 hours resupplying our local communities in Northeast Texas and South Eastern Oklahoma. We ask all of our neighbors make fuel purchases as you normally would — the worst thing we can do as a community is all of us showing up at one time to get fuel. This is creating an additional challenge for each delivery. If the community reacts that way — then we may cause the outage at an individual location. We do not expect the shortage to last any longer than 1 week.”

One of the reasons for the concern is because the Colonial Pipeline, which carries fuel from Houston to much of the Southeast and East Cost, shut down early Thursday, the Houston Chronicle reported. WNCN reported on Thursday that the Colonial pipeline needs inspections before it can be fully operational again, and it’s underwater in many parts of Texas. But it may be able to resume operations as early as Sunday.

Patrick DeHaan, senior analyst for Gas Buddy, said that longer lines at gas stations and higher gas prices could last for a month or a little longer, especially in the Houston region, where some gasoline stations are offline. League City police advised residents to just stay home and not waste gas. But other regions are reporting that these problems may start getting better as early as next week.

Flint Hill Resources’ refinery in Corpus Christi could begin to restart as early as Wednesday. Other refineries in that region will likely restart around the same time. Standard-Times reported it might be a week or longer before Corpus Christi is at normal operations.

It seems that the worst thing to do is panic and buy more fuel than you need. Rather, just continue as normal, knowing this will likely be resolved soon, officials are advising. 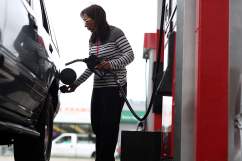 Gas Near Me: Where to Find Stations with Gasoline Nearby During ‘Shortage’