The Great American Solar Eclipse of 2017 is here, but if conspiracy theorists are right, it could lead to the end of the world as we know it. The rogue planet Nibiru is thought to be crashing into Earth soon, but that won’t happen. Even though NASA has debunked the planet’s very existence, that hasn’t stopped fears of a “Planet X” coming to hit the Earth soon.

Some theories suggest that the planet could cause a cataclysm by hitting Earth directly or just passing it by.

The Great American Solar Eclipse of 2017 will cross directly through the contiguous U.S., with the path of totality stretching from Oregon to South Carolina and passing through 11 states. Even if you aren’t in the path of totality, you’ll see at least a partial solar eclipse.

Here’s what you need to know about the Nibiru Cataclysm. We cannot stress enough that this is not really going to happen.

1. NASA Says Nibiru Definitely Does Not Exist & Is Not Coming to End the World

NASA has repeatedly said that there is no planet known as “Nibiru” or “Planet X” that will come crashing into the Earth. In a post titled “Beyond 2012: Why The World Didn’t End,” NASA explains that the world didn’t cease to exist on December 21, 2012 because the theories had no science to back them up. As NASA explains, the stories about Niburu and other wayward planets are an “Internet hoax.”

There is no factual basis for these claims. If Nibiru or Planet X were real and headed for an encounter with the Earth in 2012, astronomers would have been tracking it for at least the past decade, and it would be visible by now to the naked eye. Obviously, it does not exist. Eris is real, but it is a dwarf planet similar to Pluto that will remain in the outer solar system; the closest it can come to Earth is about 4 billion miles.

Nibiru was also supposed to crash into the Earth in 2003, but that didn’t happen either. 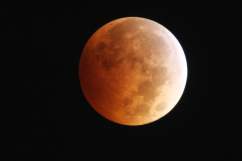 2. David Meade Says Nibiru Will Crash Into the Earth on September 23, 2017

Nibiru came back into the headlines thanks to conspiracy theorist David Meade, the author of Planet X – The 2017 Arrival. His prediction that Nibiru will crash into the Earth on September 23, 2017, a little over a month after the Great American Eclipse, got attention in the U.K. The Telegraph even created a countdown clock for the Nibiru cataclysm.

Meade told the Daily Star that the Great American Eclipse is a “harbinger” of things to come. His theory cites a part of chapter 13 in the Old Testament’s Book of Isiah.

“See, the Day of the Lord is coming – a cruel day, with wrath and fierce anger – to make the land desolate and destroy the sinners within it,” the verses read. “The Stars of Heaven and their constellations will not show their light. The rising Sun will be darkened and the Moon will not give its light.”

Meade claims the passage is linked to his “33 Coincidences,” since the eclipse has a curious number of coincidences with the number 33. For example, the path of totality starts in Oregon, the 33rd state to join the union. It ends on the 33rd degree of Charleston, South Carolina. “Such a solar eclipse has not occurred since 1918, which is 99 years – or 33 times three,” he told the Star.

That’s why Meade predicts the apocalypse is coming on September 23 – 33 days after the Great American Solar Eclipse. 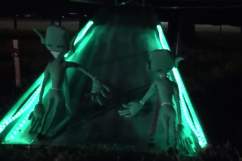 3. Nancy Lieder of Wisconsin Claimed Aliens Contacted Her in 1993 to Tell Her About Nibiru

The Nibiru conspiracy theory was born in 1995 thanks to Nancy Lieder, the founder of ZetaTalk. Lieder claims that aliens contacted her in 1993 to deliver the “Zeta message” and implanted a communications device in her brain. She gained attention before Comet Hale-Bopp became visible to the naked eye in 1997. She claimed the comet was a fraud, although she later deleted two sentences from her site. (However, nothing can truly be deleted from the Internet, and her comments are saved on Bad Astronomy.)

Lieder claimed the comet was created to distract the public from learning about “Planet X.” She claimed Planet X (which is what she called it before hearing about the name “Nibiru”) would come close to the Earth in May 2003 and that would stop the Earth from moving for 5.9 days. It would cause a disruption in the Earth’s magnetic core and could displace the crust.

When the world didn’t end in 2003, Leider blamed the establishment and said she couldn’t reveal the real date of the end of the world. In 2014, she claimed President Barack Obama was about to announce that Nibiru existed, but the “establishment” stopped him.

Lieder is still a conspiracy theorist and recently wrote on the violence in Charlottesville, Virginia.

At first, Lieder referred to her planet as “Planet X.” However, over time it became associated with the name “Nibiru.” This refers to the supposed planet the Ancient Sumerians discovered and is mentioned in the works of Zecharia Sitchin, a proponent of the Ancient Astronaut theory. Sitchin believed that Nibiru was the “12th Planet” and passes through our Solar System every 3,600 years. It was supposed to come in May 2003. The planet also carried sentient beings who interact with humans when the planet comes by. It wasn’t until 1996 that Lieder connected her Planet X to Nibiru.

Sitchin was not a fan of Lieder’s work. In 2007, he published The End of Days: Armageddon and Prophecies of the Return. In that book, he claimed the last time Nibiru came to or Solar System was in 556 B.C. That means Nibiru is “expected” to reach us in 2900. 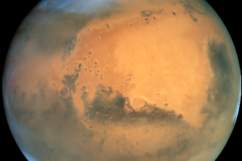 5. Scientists Insist That They Would Have Known About Nibiru if It Existed

David Morrison, a long-time NASA scientist and fellow at the Committee for Skeptical Inquiry (CSI), is the main NASA scientist who speaks out against Nibiru. He has spent years debunking the myth.

In a 2009 CSI article, he wrote that scientists would have found a planet like Nibiru by now if it existed as Sitchin described.

“A large planet (or a brown dwarf) in our solar system would have been known to astronomers for decades, both indirectly from its gravitational perturbations on other objects and by direct detection in the infrared,” Morrison wrote in 2009. “The NASA Infrared Astronomy Satellite (IRAS) carried out the first all-sky survey in 1983, which, along with several subsequent surveys, would have seen Nibiru if it was there.”

He noted that Nibiru proponents have just said that the planet was “hiding” behind the sun or it could only be seen if you were standing on the South Pole. He called both those ideas “absurd.”

Morrison told the Washington Post in January 2017 that there are still 2 million websites about Nibiru possibly colliding with Earth or entering out Solar System. Morrison also said that if Nibiru really had come close to Earth before, it would have taken the moon with it as it left. 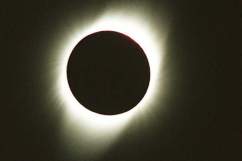 When Was the Last Total Solar Eclipse in the US? Day & Date

Loading more stories
wpDiscuz
0
0
Would love your thoughts, please comment.x
()
x
| Reply
Today's solar eclipse revived interest in the Nibiru cataclysm, when a rogue planet is supposed to hit Earth. It won't happen, but here's a look at the theory.