Eric Bolling Jr., the son of former Fox News anchor Eric Bolling, tragically died at the age of only 19, and his father says his death was an accident.

In late October 2017, Eric Bolling said his son’s death was an accident after former Fox host Bill O’Reilly made comments about Bolling’s son, attempting to tie his death to accusations against Eric Bolling in the workplace. Bolling called it “beyond inappropriate” that O’Reilly mentioned his son’s death, adding that “my parting from Fox News was in no way connected to the tragic news of my son’s passing,” according to Philly.com. The newspaper also reported that Bolling “said a coroner indicated Eric’s death was an accident and not linked to the accusations made against his father, leading O’Reilly to quickly backtrack.” (O’Reilly had initially said, “Eric Bolling’s son is dead. He’s dead because of allegations made – in my opinion and I know this to be true – against Mr. Bolling.”)

Apologies to Eric Bolling and prayers for him and his family. The message I tried to send was that allegations harm kids. Nothing more.

The circumstances around Bolling’s son’s death had been fuzzy for some time. In a tweet on the afternoon of September 9, Bolling Sr. confirmed that his son, who was called Eric Chase, had died but said an autopsy would be conducted in the next week, pushing back, without naming the publication, at a TMZ report that claimed a cause of death had been determined. The grieving father wrote: “Authorities have informed us there is no sign of self harm at this point. Autopsy will be next week. Please respect our grieving period.”

TMZ had alleged that Bolling Jr. died of a drug overdose after previously reporting, with anonymous sourcing, in an article and headline, that Bolling Jr. had committed suicide. Later in the day, TMZ removed all references to suicide from its article and merely wrote, “The son of Fox News Channel anchor Eric Bolling has died, TMZ has learned, hours after his father was forced out of the network.” (Bolling has said he wasn’t fired by Fox, and, as noted, he has now revealed that his son died accidentally.)

However, according to Daily Camera, as of October 23, “Boulder police spokeswoman Shannon Aulabaugh said last month that while an autopsy was performed, toxicology tests could take up to four weeks. Those results have yet to be released. The coroner’s office would not comment on Bolling’s statement or the cause of the death.”

TMZ subsequently alleged: “Our sources say Eric Chase was found in his bed Friday afternoon with the covers over him in normal position. There was no suicide note, we’re told, and no pill bottles or drug paraphernalia.” Toxicology and other tests were being done to determine cause of death, according to TMZ.

“Adrienne and I are devastated by the loss of our beloved son Eric Chase last night. Details still unclear. Thoughts, prayers appreciated,” Bolling Sr. also wrote, referring to his wife.

Adrienne and I are devastated by the loss of our beloved son Eric Chase last night. Details still unclear. Thoughts, prayers appreciated.

Bolling later thanked people for all of the prayers the family had received.

We are overwhelmed by the love and support we have received. Adrienne and I thank you all and ask that you please keep us in your prayers.

The entertainment site later updated its story to add of the alleged cause of death: “Well placed FNC sources tell TMZ … Eric Chase died from a drug overdose. We’re told he was having a hard time dealing with the trouble his dad was having at the network. Our sources say he was extremely embarrassed by the stories and was ’emotionally upset.'” This information also has not been confirmed.

TMZ didn’t reveal its sources. Other well-known news sites are also reporting that Bolling Jr. died but are not providing a cause of death yet, although others cited the earlier now updated TMZ story. Fox News sent Heavy a statement that said only, “We are very saddened to hear of the passing of Eric Bolling’s son. Eric Chase was a wonderful young man and our thoughts and prayers are with the entire Bolling family.”

According to The New York Daily News, “the younger Bolling was an economics student at the University of Colorado Boulder.” People Magazine reported that Bolling Jr. died in Boulder, and that police there say his death is still under investigation by police and the coroner as to the cause.

Journalist Yashar Ali also reported that Bolling’s son had died tragically, although he didn’t reveal the cause of death. Ali tweeted: “Very sad news, Eric Bolling’s son, who was only 19, died last night. By all accounts, Eric was incredibly devoted to his son. Heartbreaking.” In August, Bolling Sr. filed a defamation suit against Ali.

President Donald Trump retweeted a post from Kellyanne Conway offering love and prayers to Bolling and his family.

Other prominent media figures tweeted about the death. Sean Hannity wrote, “@ericbolling To my dear friend, please know we all love you, will be here for you and your family.” CNN’s Don Lemon wrote, “So awful. My heart goes out to Eric and his family.”

The very day that Bolling Jr. died, Friday September 8, Daily Variety reported, Fox News had confirmed that “Fox News Channel will part ways with host Eric Bolling (the father), a host and contributor whose on-air presence at the 21st Century Fox-owned network had been growing in recent months, after allegations surfaced that he had harassed colleagues there.”

Eric Chase Bolling was the son of Eric Bolling and his wife, Adrienne Bolling. The couple had one child. You can read more about Adrienne here.

Bolling Sr. had written about his son before on social media and spoken about him in interviews. On January 1, 2012, Bolling wrote on Facebook that his son was taken to the ICU after suffering a lacerated spleen while snowboarding in Albany. Bolling praised Eric Chase’s doctors at the Albany Medical Center’s Pediatric Intensive Care Unit on The Five.

When Eric Chase Bolling was in preschool, he asked his father to read a book to his class, and chose The Spider And The Fly. Benziga quoted Bolling Sr. years ago as saying, “Many years ago, my son was in preschool, he’s 11 now, so let’s call it 7 years ago, for months he said ‘Daddy, you need to read a story for class.’ I said, ‘Sure, no problem buddy.’ He picked April 10th, April 10th finally comes and I’d forgotten about it, he says tomorrow is your day to read. I say ‘Sure, what book do you want to read?’ He picks Spider and the Fly.” The father was a commodities trader then and lost a lot of money because it was an awful day on the trading floor but said, “But you know what, I will never forget the look on his face while I was reading that book.”

Bolling Sr. and his family liked to visit theme parks together.

The Huffington Post had accused Eric Bolling Sr., a longtime Fox News host, of sending “an unsolicited photo of male genitalia via text message to at least two colleagues at Fox Business and one colleague at Fox News, a dozen sources told HuffPost.”

Bolling Sr.’s attorney told The Huffington Post at the time: “Mr. Bolling recalls no such inappropriate communications, does not believe he sent any such communications, and will vigorously pursue his legal remedies for any false and defamatory accusations that are made.”

Ali wrote about the defamation suit previously: “Just received a summons. Eric Bolling is suing me for defamation – $50 million in damages. I stand by my reporting + will protect my sources.”

“That nature of this action is for damages and injunctive relief based on defamation arising from the (Ali’s) efforts to injure (Bolling’s) reputation through the intentional and/or highly reckless publication of actionable false and misleading statements about (Bolling’s) conduct and character,” the lawsuit alleges.

This article is being updated as more is learned about what happened to the younger Bolling. 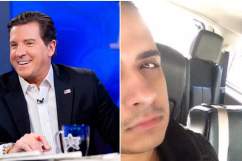 Read More
Breaking News, Fox News
wpDiscuz
4
0
Would love your thoughts, please comment.x
()
x
| Reply
Eric Chase Bolling, son of Eric Bolling, formerly of Fox News, has died tragically, his father confirmed, and he has pushed back at a TMZ report on the cause of death.