These harrowing videos from St. Thomas show the power that the Category 5 storm is packing:

The dramatic videos were shot by Harold Defrieze, who lives on St. Thomas, as the storm approached. He said it isn’t the first hurricane he’s been through on the island, but “it’s definitely the biggest.”

As the winds intensified, Defrieze and his friends took shelter.

“I feel helpless,” he told Heavy. “We can hear roofs ripping off. The pressure is insane. My head feels like it’s gonna pop. Debris or hail is pounding us right now.”

Hurricane Irma made landfall around 2 a.m. Eastern time on Wednesday on the island of Barbuda. The eye of the storm is passing north of Puerto Rico.

Here’s the latest update from the National Hurricane Center:

Irma is moving toward the west-northwest near 16 mph (26 km/h), and this general motion is expected to continue for the next couple of days. On the forecast track, the extremely dangerous core of Irma will continue to pass just north of Puerto Rico tonight, pass near or just north of the coast of Hispaniola Thursday, and be near the Turks and Caicos and southeastern Bahamas by Thursday evening. 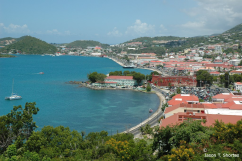 The U.S. Virgin Islands was devastated by Hurricane Marilyn in 1995. More than 10,000 people were left homeless on St. Thomas and estimated damages reached $2 billion.