Hurricane Ophelia has reached Ireland and has been downgraded to a post-tropical cyclone. Once a Category 3 storm, Ophelia brought some very nasty weather to Ireland today. According to CNBC, this is the worst storm to hit the area in over 50 years.

According to CNN, Ophelia is the “farthest east that a major hurricane has traveled in the Atlantic.” She lost much of her strength as she traveled over the cold waters of the Atlantic, but she is still a force that can cause significant damage. Officials in the UK have warned residents about Ophelia and have encouraged them to stay indoors until the storm completely passes.

One woman in West Waterford has died after a tree fell on her car. According to BBC News, there are currently 120,000 homes without power in the Irish Republic. It could take several days for power to be restored in some areas.

Latest model guidance for #Ophelia at 9am
Check @MetEireann for further updates pic.twitter.com/FGbFdXNOEh

Heavy rain and thunderstorms have been impacting the area throughout much of the day. Officials have warned that the storm surge along the coast could cause some flooding. According to an earlier update from the National Hurricane Center, “a dangerous storm surge is expected to produce significant coastal flooding near and to the east of where the center of the post-tropical cyclone makes landfall.”

At this time, the storm is moving past Ireland and is heading toward Scotland and Great Britain. Parts of north and west Wales and southwest Scotland will experience gusty winds as the evening progresses.

Below is a list of emergency numbers for residents in Northern Ireland that need assistance. 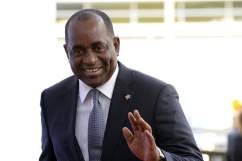