The F.B.I. is investigating the incident, which took place in Lower Manhattan when a man drove through a cyclist/pedestrian path with a Home Depot rental truck. He traveled over 20 blocks and mowed down cyclists and pedestrians on the way.

“Let me be clear, this was an act of terror and a particularly cowardly act of terror aimed at innocent civilians,” NYC Mayor Bill de Blasio said at a police briefing.

The incident took place at 3:05 p.m. local time and the truck drove southbound on the West Side Highway at Houston Street, striking bicyclists and pedestrians on the way to Chambers Street, where it collided with a school bus nearby Stuyvesant High School. Police said two adults and two children on the bus were injured as a result of the crash.

The suspect exited the vehicle and displayed a paintball gun and a pellet gun before a responding officer shot him.

Guy running here is the suspect involved in the Manhattan Bloodshed. pic.twitter.com/wFxOEvzbW6

He was taken to a nearby hospital, underwent surgery and is expected to survive.

The suspect has been identified as Sayfullo Saipov, a man from Tampa who’s originally from Uzbekistan.

8- CBS has an exclusive photo of the NYC terror suspect. #Manhattan pic.twitter.com/Z8bnRxxi61

Police say they found a note inside the truck that he used to commit the act that indicates he carried out the attack for the Islamic State, NBC News reported.

Witnesses described the chaotic scene that took place just blocks from the World Trade Center, saying they heard the suspect yell “Allahu Akbar” as he ran out of the truck.

“He did make a statement when he exited the vehicle,” New York City Police Commissioner James P. O’Neill said. “If you look at the M.O. of the attack, that’s consistent with what’s been going on. That, along with the statement, have enabled us to label this a terrorist attack.”

“This is a tragedy of the greatest magnitude,” O’Neill said.

No terror group has claimed responsibility for the attack yet, but supporters have celebrated the attack, saying: You killed men and widowed women and orphaned children…what do you expect?”

Vehicle-ramming attacks are a staple of ISIS and have become quite frequent throughout the past two years. In an ISIS magazine article from November 2016, ISIS suggested to jihadists how to carry out a successful attack as a lone wolf operative. In the article, ISIS said that a lone wolf should use a vehicle to plow into a crowd and to carry a secondary weapon.

Since then, ISIS has used vehicles for deadly attacks across Europe and the United States. Islamist vehicle ramming has also inspired non-Islamists in England and the United States, with a white supremacist using his vehicle to mow down protesters in Charlottesville, Virginia in August.

In May, ISIS released a video telling its supporters how to wage car jihad.

In addition to that, a French terrorist group associated with ISIS encouraged its followers to carry out attacks on October 31.

“Terrorize them on October 31, Allah Akbar,” a poster read.

But an ISIS news bulletin hours after the attack didn’t mention anything about it.

3- ISIS just published their evening news bulletin. No mention whatsoever of #Manhattan. They speak of attacks in Afghanistan & Iraq. pic.twitter.com/CDqIFSxkmy

Saipov is out of surgery and will survive, authorities said. According to police, he was “unapologetic” for the attack, adding he intended to mow down more people if he didn’t crash. 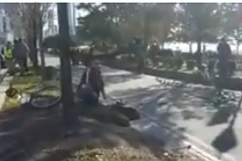 WATCH: Aftermath of Truck Ramming into Cyclists in Lower Manhattan

Loading more stories
wpDiscuz
0
0
Would love your thoughts, please comment.x
()
x
| Reply
Police in Manhattan are investigating a terrorist attack where a vehicle drove through pedestrians and cyclists. Was ISIS responsible for the attack?