The League of the South prepares their march in Tennessee, bagpipes blaring, forming up with shields. pic.twitter.com/p9o47EeeYI

Hundreds of demonstrators took to the downtown streets of Murfreesboro, Tennessee on Saturday as part of a “White Lives Matter” rally and counter protests. Police and city officials took major precautions before and during the protests to ensure the safety of all those involved.

Neo-Nazis and white nationalists took to the city to march in protest. The Murfreesboro rally started at 1:30 p.m. local time, and helicopters, K-9 units and armed officers were seen on the street. Safety checkpoints and metal detectors were also on site, and there was little-to-no violence reported.

According to CBS News, one person was arrested during the afternoon when he jumped a barrier and attempted to move toward the white supremacist rally.

One video showed a group marching in the street chanting: “Closed borders, white nation, now we start the deportation!”

It appeared that after just over an hour, the rally was over, as no demonstrators were seen in the area where the protest started.

The 10-15 protestors just walked out of the Murfreesboro square. There don't appear to be any here now. Counter protestors chant as they go. pic.twitter.com/xOKRrlNREE

According to The Tennessean, members from the League of the South, the Traditionalist Worker Party, Vanguard America and other groups affiliated with the National Socialist Movement were expected to be in attendance.

The Southern Poverty Law Center classifies the League of the South as a “neo-Confederate group that advocates for a second Southern secession and a society dominated by European Americans.” It refers to the other groups as being groups that encourage white nationalism and white supremacism.

Some of the groups associated with Saturday’s rally are the same that took part in the Unite the Right protest in Charlottesville, Virginia in August. The demonstrations turned violent, and one person was killed when a vehicle driven by James Alex Fields hit dozens of counter protesters who were in the street.

The White Lives Matter rallies were denounced by many city officials, including Murfreesboro Mayor Shane McFarland. His office issued a statement three days ahead of the scheduled rally, saying he was “deeply saddened that any group can come in and create chaos and fear in our city.”

Tennessee Gov. Bill Haslam told reporters Friday that white supremacists “are not welcome” in his state and vowed to take action if things turn violent.

“We want to send a really clear message that these folks are not welcome in Tennessee,” Haslam said. “If you’re part of the white supremacist movement you’re not somebody that we want in Tennessee.”

See photos and videos of the Murfreesboro protests below:

“this is it: murfreesboro, tn! don’t blink or you might miss it. this is history right here.” —a gentleman beside me counter protesting pic.twitter.com/q5joUQTcqN

We are hearing reports that the rallyists are leaving #Murfreesboro and moving to Henry Horton State Park to protest. pic.twitter.com/mNs5oxPrGB

What’s expected as far as where white nationalists will be in relation to counter protestors at #whitelivesmatter protest in#Murfreesboro pic.twitter.com/T3lgumPqJ3

BREAKING. We have confirmed that the white supremacists have CANCELLED their #Murfreesboro rally. WE ARE DECLARING VICTORY. pic.twitter.com/cbPhb6yxzS

Again in Murfreesboro, both sides are separated by a wide gulf and heavy police presence. pic.twitter.com/dZC609Jpzi 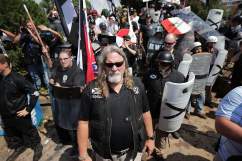 Read More
Breaking News
wpDiscuz
0
0
Would love your thoughts, please comment.x
()
x
| Reply
Hundreds of people were expected to gather in Murfreesboro on Saturday to take part in a White Lives Matter rally. See photos and videos from the protests.