Lee Harvey Oswald has been a conspiracy-theory staple since he assassinated then-President John F. Kennedy on Nov. 22, 1963 by hiding in the Texas School Book Depository and firing shots at Kennedy’s passing motorcade. Oswald himself died two days later when somebody shot him as police transferred him between jail facilities. Here’s five things to know about Lee Harvey Oswald:

1. He Was a Devoted Communist Who Briefly Defected to the Soviet Union at the Height of the Cold War

Oswald was born in New Orleans on October 18, 1939, but had a rootless childhood. As Oswald biographer Peter Savodnik explained during a 2013 interview with the Atlantic noting the 50th anniversary of Kennedy’s assassination, before he enlisted in the Marines at age 17 he and his mother had moved 20 times, “And each move was precipitated by some failure on her part—a failed relationship, a lost job, or some rupture or crisis.”

As a young teenager he became interested in socialism after Julius and Ethel Rosenberg were sentenced to death for passing nuclear secrets to the Soviets. (The Rosenbergs were executed on June 19, 1953.)

A couple years after enlisting Oswald was stationed in Japan, where his fellow Marines gave him the nickname “Osvaldovich.” One Marine, Owen Dejanovich, later told PBS’ Frontline that “If you complained about, “Oh, we’ve got to go on a march this morning” or “We’ve got to do this this morning,” scrub barracks or whatever we had to do, if you were complaining about it, he would — he would say that that was the capitalist form of government making us do these things. Karl Marx and his form of government would alleviate that.”

After leaving the Marines, Oswald traveled to Moscow in 1959 in hopes of becoming a Soviet citizen. In his handwritten request for “asylum” and citizenship, Oswald wrote “I want citizenship because I am a Communist and a worker, I have lived in a decadent capitalist society where the workers are slaves. I am twenty years old, I have completed three years in the United States Marine Corps, I served with the occupation forces in Japan. I have seen American military imperialism in all its forms….”

When Soviet authorities denied Oswald’s request, he attempted suicide by slashing his wrists. Someone found him and rushed him to the hospital, and a few days later the Soviet authorities relented and let Oswald stay in the country. They sent him to Minsk, where he met and married his wife, Marina. However, Oswald ultimately did not find the USSR to his liking, and returned to America in 1962, taking Marina with him.

After returning to America, Oswald moved to Dallas and got a job in a photography lab, where he used the lab’s photography equipment to make false identification cards in the name of “Alek J. Hidell.” One night in April 1963, seven months before murdering Kennedy, Oswald took a rifle to the home of Edwin Walker, a staunchly anti-Communist major general in the U.S. Army, and shot at Walker through the window. The bullet barely missed Walker’s head.

The day after the attempted shooting, Walker was interviewed about the incident; video snippets of that interview still exist.

3. Oswald Was Initially Arrested for Murdering a Police Officer, Not the President

About 45 minutes after Kennedy got shot, a Dallas police officer named J.D. Tippit pulled Oswald over in the city’s Oak CLiff neighborhood. Oswald shot Tippit at point blank range. Police arrested him 30 minutes later in possession of a .38 caliber gun which ballistics traced to Tippit’s shooting.

When police brought Oswald back to headquarters, other officers were taking statements from Texas School Book Depository employees. One of them recognized Oswald as he passed, and that is when the Dallas police realized Tippit’s murderer might also be the man who’d just shot the president.

Oswald was formally charged with both murders later that evening. However, as the New York Daily News reported on Nov. 23, 1963, Oswald maintained his innocence and told reporters, “The first I heard of it [the assassination] was when I read about it in the papers.”

By 2013, 50 years after Kennedy’s murder, polls showed that only 25 percent of Americans believed Oswald acted alone in killing Kennedy, compared to nearly 60 percent who say Oswald was part of a larger conspiracy.

Doubts about the “lone gunman” theory are what inspired Kennedy’s predecessor Lyndon B. Johnson to set up the Warren Commission, which investigated and announced in 1964 that Oswald had likely acted alone and there was no evidence “of any conspiracy, domestic or foreign” behind Kennedy’s murder.

The Warren Commission report was initially well-received by Americans. As History.com noted, “It’s hard to believe now, but the Warren Commission initially received a warm reception and the public seemed willing to accept its conclusions. Before the release of the report a Gallup poll found that only 29 percent of Americans thought Oswald acted alone, while 52 percent believed in some kind of conspiracy. A few months after the release of the report, 87 percent of respondents believed Oswald shot the President.”

But as the 1960s progressed (and cynicism toward the government increased), more Warren Commission skeptics started popping up. Early conspiracy theories focused on the Russians or the Cubans as likely culprits, but by the 1980s the theories changed to say agents of the U.S. government itself were behind Kennedy’s murder.

On Nov. 24, two days after Kennedy’s murder, Dallas police were moving Oswald from the city to the county jail when nightclub owner Jack Ruby (a strong Kennedy supporter) shot him. Oswald died in surgery less than two hours later. New York Times reporter Gladwin Hill, who wrote about Oswald’s murder the day it happened, referred to Oswald as a “politically eccentric warehouse clerk.”

Oswald’s planned transfer from city to county custody was broadcast live on national news networks, so his shooting was to. The event holds the dubious honor of being the first murder broadcast on live television, according to the Guinness Book of World Records. 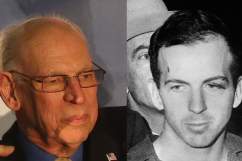