Things on Oxford Street in London have calmed down, about one hour after reports of an “explosion” and “gunfire” broke out on social media on Friday evening. The videos above show people — including police — running down the street.

“Additional officers remain on duty in the West End to reassure the public. We thank the public for their patience and assistance during our response. If you see anything suspicious dial 999 immediately,” the Metropolitan Police tweeted a few minutes ago.

Below is the original story:

Within a few minutes of the news breaking on social media, police and other emergency crews arrived on the scene.

“We were called at 16:43 to an incident at Oxford Circus tube. Three fire engines & 15 firefighters are in attendance. Please avoid the area,” London Fire Brigade tweeted a short time ago.

Several people on Twitter have tweeted about being on lockdown, many seeking shelter inside buildings and shops in the area. The streets have been cleared and police have asked people to avoid the area.

The Metropolitan Police released the following statement on their website, shortly after reports of an incident of some kind were reported.

“Police have responded as if the incident is terrorist related. Armed and unarmed officers are on scene and dealing along with colleagues from British Transport Police. If you are on Oxford Street go into a building and stay inside until further direction. Avoid traveling to the Oxford Street area. At this stage police have not located any casualties.”

Shortly after, Metropolitan Police posted another update. You can read it below.

“To date police have not located any trace of any suspects, evidence of shots fired or causalities. Officers continue to work with colleagues from British Transport Police in the area of Oxford Circus. Updates will be provided as soon as we have them. If you are in building stay in a building, if you are on the street in Oxford Street leave the area. Officers are continuing to search the area.”

If you are on #OxfordStreet go into a building and stay inside until further direction. Avoid travelling to the Oxford Street area. At this stage police have not located any causalities.

According to BBC News, police responded to an incident at the Oxford Circus Station. However, there have been a lot of conflicting reports about what is actually going on. Some people have suggested that there was a fight on the tube, while others believe that this incident is terror-related. The presence of armed officers and the Metropolitan Police statement, that they are responding as if it is terror-related, support the theory. Conflicting reports were abundant, but police had not confirmed anything one way or another.

“Police at Oxford Circus tell me: there’s a lot of conflicting stories. First calls were that there was an incident on Oxford Street, they are talking with BTP and checking Oxford Street station. There are a lot of firearms officers on site,” BBC journalist Julia Macfarlane tweeted.

“Building are on Lockdown. Louis Vuitton Boutique closes with people inside,” wrote one Twitter user.

“Something bad is happening in Oxford Circus and Soho area people running like crazy we are looked inside a shop,” wrote another.

“Second round of running and screaming far more terrifying than first. Ppl dropped their shopping on the streets and bolted,” added a third. 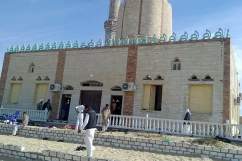 Read More
London
wpDiscuz
0
0
Would love your thoughts, please comment.x
()
x
| Reply
People on Oxford Street in London were seen running to safety after gunshots and an explosion were heard. Several buildings in the area are on lockdown.