A video of a young boy named Keaton Jones has gone viral this week. Jones’ mom, Kimberly, filmed him while he talked about getting bullied at school. In the video, an emotional Jones asks, “why do they bully?” He goes on to say, “it’s not okay.”

“They make fun of my nose, they call me ugly. They say I have no friends,” Jones tells his mother, while she records him. Jones knows all about bullying from first-hand experience, but he wanted to be sure to give some encouragement to other kids that might also be in his shoes.

“If you are made fun of just don’t let it bother you. Stay strong, I guess. It’s hard. It’ll probably get better one day,” he said.

The video was later posted online and has been watched over 17 million times. It has gained the attention of several celebrities, many of whom have posted about Jones, telling him that they support him and letting him know that he’s not only brave for speaking out about this bullying, but vowing to stand up for him.

“I want to bring Keaton to Vegas and hang out at UFC Headquarters. If anyone knows how i can reach the family please let me know,” tweeted UFC President, Dana White.

“Buddy next time I make it home to Knox I’m going to walk into that lunchroom with you and watch the bullies say they are sorry to you. you don’t deserve that. keep your head up and continue to be kind…you will always Come out on top. sending a hug,” tweeted country music star, Kelsea Ballerini.

According to the New York Daily News, the video has since been removed from Facebook. You can watch it below.

On Monday, December 11, Horace Maynard Middle School Principal Greg Clay spoke out about the video. According to USA Today, Principal Clay said that things aren’t “as rampant” as Jones made them out to be. Clay also said that he was “not aware” that Jones had been “repeatedly bullied.” Clay told the media that the issue involving Jones “was resolved weeks ago.”

“It’s not as rampant as the video would have you believe. I can’t tell you what was done, but I can tell you action was taken with the children,” Principal Clay told USA Today.

“We’re having a good school year. I’m sorry it’s like this. We all sympathize with Keaton and we’re doing everything we can to make sure it never happens again. Everybody saw the video and it was horrible. We don’t want anyone to feel like that. Keaton’s a good kid. We’ll take care of him,” Principal Clay added.

Despite Clay’s initial response, Jones’ mom says that she picked her son up from school early on Friday because he was “afraid to go to lunch.”

Since Jones’ video went viral, Horace Maynard Middle School is taking action. The school was supposed to hold an assembly today, but it’s unclear if that happened and what might have been discussed. Clay told USA Today that the media wouldn’t be allowed at the assembly. 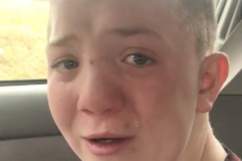 Read More
Bullying
wpDiscuz
0
0
Would love your thoughts, please comment.x
()
x
| Reply
Principal Greg Clay has responded to Keaton Jones' video. He said that things weren't as "rampant" as Jones' video makes them out to be.