Max Born, a German physicist and mathematician who won the Nobel Prize, and who revolutionized the complex field of quantum physics, is the subject of the December 11, 2017 Google Doodle.

“Today’s Doodle celebrates the 135th birthday of Max Born, German physicist and mathematician who was awarded the Nobel Prize for his contribution to the field of quantum mechanics,” Google reported, explaining, “An atom is the smallest unit of matter. Quantum mechanics is a chapter of physics that studies matter at this incredibly granular level, leading to the invention of personal computers, lasers, and medical imaging devices (MRI), among other game-changing technologies.”

Born is the second German scientist honored by a Google Doodle in two days. On December 10, Google honored bacteriologist Robert Koch. Both men were brilliant scientists whose theories were influential. “Max Born was a German physicist who played a vital role in the evolution of quantum mechanics. His theoretical work in solid-state physics and optics is also considered very influential,” reports Famous Scientists.

1. Born Was Awarded the Nobel Prize for the ‘Born Rule’

Born is most famous for a theory that is called the “Born Rule. Explained Google: “Born was awarded the Nobel Prize in 1954 for the Born Rule — a quantum theory that uses mathematical probability to predict the location of wave particles in a quantum system. Previous theories proposed that wave equations were exact measurements, involving cumbersome physical measurement experiments.”

Born was considered a “gifted mathematician” who “discovered that matrices or ‘arrays of numbers by rows and columns’ could yield a similar result, relying on predictions of probability. This revolutionary theory now provides the basis for practically all quantum physics predictions,” Google noted.

The Google Doodle tries to capture this element of Born’s work. “Try to spot the wave function in today’s Doodle, created by guest artist Kati Szilagyi, to honor this pioneering physicist,” wrote Google.

According to Famous Scientists, “Perhaps Born’s most influential contribution to quantum theory was his concept that the wave-function could only be employed to predict the probabilities of different results being concluded in measurements; more precisely, that the square of the wave-function symbolizes a probability density. The concept was termed as the statistical interpretation of quantum theory.” 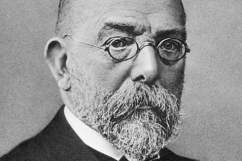 2. Born Was a Professor Who Helped Develop ‘Lattice Dynamics’

Max Born was also an educator during his lifetime. “An outstanding student, Born earned his Ph.D. at Göttingen University where he later became a professor of theoretical physics, collaborating with and mentoring some of the most famous scientists of the time,” Google noted. “In 1933 he was forced to flee Germany for England, where he served as the Tait Professor of Natural Philosophy at the University of Edinburgh for nearly two decades until his retirement in 1954 when he returned home to Göttingen.”

His wife was named Hedwig and they had three children. “It was a troubled relationship, and Born and his wife often lived apart,” reported Brittanica.com. All the same, “The Göttingen years were Born’s most creative and seminal. In 1912 Born and Hungarian engineer Theodore von Karman formulated the dynamics of a crystal lattice, which incorporated the symmetry properties of the lattice, allowed the imposition of quantum rules, and permitted thermal properties of the crystal to be calculated. This work was elaborated when Born was in Göttingen, and it formed the basis of the modern theory of lattice dynamics,” the site noted.

3. Born Came From a Jewish Family & His Father Was Also a Professor

Max Born is pictured on the right.

According to a biography for him on the Nobel Prize website, Max Born “was born in Breslau on the 11th December, 1882, to Professor Gustav Born, anatomist and embryologist, and his wife Margarete, née Kauffmann, who was a member of a Silesian family of industrialists.”

He started his tutelage under prominent mathematicians while still in Breslau. “Max attended the König Wilhelm’s Gymnasium in Breslau and continued his studies at the Universities of Breslau (where the well-known mathematician Rosanes introduced him to matrix calculus), Heidelberg, Zurich (here he was deeply impressed by Hurwitz’s lectures on higher analysis), and Göttingen,” the Nobel bio says.

Brittanica.com reports of Born’s upbringing: “Born came from an upper-middle-class, assimilated, Jewish family. At first he was considered too frail to attend public school, so he was tutored at home before being allowed to attend the König Wilhelm Gymnasium in Breslau.”

4. Born Served in the German Military But the Rise of Hitler Briefly Forced Him Into Exile

Wikimedia CommonsThe grave of Max Born and his wife.

Born’s scientific career was briefly interrupted by World War I. “An appointment as professor (extraordinarius) to assist Max Planck at Berlin University came to Born in 1915 but he had to join the German Armed Forces,” the Nobel biography says. “In a scientific office of the army he worked on the theory of sound ranging. He found time also to study the theory of crystals, and published his first book, Dynamik der Kristallgitter (Dynamics of Crystal Lattices), which summarized a series of investigations he had started at Göttingen.”

As he was Jewish, Adolf Hitler’s rise forced Born out of Germany during World War II, briefly robbing the country of his genius. “He was forced to leave Göttingen as a Jew after the rise of Adolf Hitler,” reports Famous Scientists. “He spent three years in Cambridge, and alter became Professor of Natural Philosophy in the University of Edinburgh, where he stayed until 1953. After his retirement, Born returned to Germany.”

5. Max Born Has Received Many Accolades

Further, reports the site, “He holds the Stokes Medal of Cambridge, the Max Planck Medaille der Deutschen Physikalischen Gesellschaft (i.e. of the German Physical Society); the Hughes Medal of the Royal Society, London, the Hugo Grotius Medal for International Law, and was also awarded the MacDougall-Brisbane Prize and the Gunning-Victoria Jubilee Prize of the Royal Society, Edinburgh.”

That’s not all. “In 1953 he was made honorary citizen of the town of Göttingen and a year later was granted the Nobel Prize for Physics. He was awarded the Grand Cross of Merit with Star of the Order of Merit of the German Federal Republic in 1959,” The Nobel site reports.

Read More
5 Fast Facts, Breaking News, Google Doodle, Science
Max Born, a German physicist and mathematician who won the Nobel Prize, and who revolutionized quantum physics, is the subject of a Google Doodle.