An image shows the scene on the morning commute for drivers in Los Angeles on Wednesday morning.

Shocking images Wednesday showed the scene as drivers took to the 405 Freeway in the Los Angeles area for their morning commute. A massive wildfire, named the Skirball fire, overtook some of the area near the roadway and threatened thousands of residents nearby.

Mandatory evacuations were ordered in Bel Air as the brush fire erupted near the Getty Center and climbed up the hillside. The 405 Freeway in Bentwood was closed temporarily as crews try to tend to the blaze. The southbound lanes of the freeway were reopened hours later, and the northbound lanes remained closed, ABC 7 News reported.

See a map of the current location of the Skirball Fire below:

The fire was first reported around 5 a.m. local time Wednesday east of the 405 and north of Sunset Boulevard. Those in the area were ordered by the Los Angeles Fire Department to evacuate. Dozens of schools in the path of the fire have also been closed.

Officials said Thursday that the fire is 20 percent contained and has swelled to 475 acres, destroying four homes and damaging 12 others. Many evacuation orders are still effect.

Here’s a list of areas that are under mandatory evacuation orders by officials:

— All locations within these boundaries: South of Mulholland Dr / East of 405 Fwy / North of Sunset Blvd / West of Roscomare Rd.

Those who have been forced to evacuate are encouraged to seek shelter at several temporary locations. See the location of those facilities below:

— The Balboa Recreation Center at 17015 Burbank Boulevard in Van Nuys

The Los Angeles Times reported that several homes in the Bel-Air neighborhood were seen burning as the fire continued to grow. That includes Rupert Murdoch’s Moraga Estate, where he lives with his wife in a 7,500-square-foot home. Bloomberg reported.

The fire grew so quickly because of dry and windy conditions, which have spread hot embers across the area. The conditions and probability for a wildfire to break out put the area and firefighters on high alert.

“It’s been years since anything here has burned at all,” Los Angeles Fire Department Capt. Cody Weireter told The Times. “You’ve got heavy, heavy brush, you’ve got the dryness — obviously, we haven’t had any rain at all. A lot of the fire is topography-driven, which already becomes dangerous. The wind is going to increase that twofold.”

See some of the shocking images and videos from the Skirball fire:

This is My drive to work this. Lord “Be still”.
Praying ? for ppl up in those mountains, LA County and myself this morning. FYI anyone on the #405 turn around ITS ON ? #SkirballFire pic.twitter.com/F0rMsotbTa

Thoughts are with those in #LosAngeles and surrounding areas affected by #SkirballFire. Please heed cautions, evacuate as required, help one another and stay safe! pic.twitter.com/094JB6jjOz

The Skirball fire is the latest of many wildfires that have been raging in the Southern California area. There’s also the Ventura County fire, the Sylmar fire, the Santa Clarita fire and the San Bernardino fire.

The outbreak of wildfires in the Southern California area prompted President Donald Trump to offer his thoughts and prayers to residents in the path of the dangerous fires.

Our thoughts and prayers are with everyone in the path of California’s wildfires. I encourage everyone to heed the advice and orders of local and state officials. THANK YOU to all First Responders for your incredible work! https://t.co/g9y9PkB352 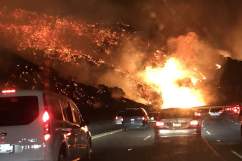 Read More
Breaking News
A wildfire, named the Skirball Fire, broke out Wednesday morning and has consumed the area near UCLA. See a current map and updates of the wildfire.