If you’re wanting to pick up some Powerball tickets for the estimated $440 million jackpot tonight, you still have time. Most places don’t stop selling tickets until about an hour before the 10:59 p.m. Eastern drawing every Wednesday and Saturday night. And even though your chances of winning the lottery are pretty slim, it’s still fun to spend $2 and dream about how you might end up being a multimillionaire. There are so many things each of us could do with those winnings! But if you want to dream a little longer, where should you go to get a ticket? We have all the details below.

Just go to any gas station, convenience store, or grocery store — most of them will sell Powerball tickets. It only costs $2 to play. But you might want to give the store a call first to make sure they sell the ticket, and then ask them how late the tickets are offered for sale. At most gas stations and convenience stores, the cashier can sell you a ticket. At many grocery stores, however, you may need to go to their service counter where they sell lottery tickets instead of buying them from the cashier.

If you don’t want to pick the numbers yourself, just ask the cashier for a “Quick Pick” ticket, and your numbers will be randomly picked for you. If you want to pick your own numbers, you’ll need to fill out a Powerball card first with the numbers you choose. These will either be at a grocery store’s information desk, a cashier’s station, or at a separate desk near checkout. Many convenience stores place the cards at a separate desk near checkout so you don’t hold up the line while you’re filling out your Powerball card. You can spend $1 more and get a Power Play that will give you a chance to increase your non-jackpot winnings.

Most states will shut down Powerball ticket sales an hour before the drawing. That means, you’ll have until 9:59 pm Eastern to buy your tickets since the drawing is at 10:59 pm Eastern. However, some states quit selling tickets even earlier than that, so it’s best not to wait until the last minute. And the bigger the jackpot gets, the longer the line will be. It probably won’t be too bad for a $570 million jackpot, but if it gets much bigger, you might be looking at really long lines in some areas.

If you’re in one of the following six states, you’re out of luck: Alabama, Alaska, Hawaii, Mississippi, Nevada, and Utah. These states don’t have state lotteries, so they also don’t sell tickets for Powerball or any other multi-state lottery, according to Time. Why the states don’t have lotteries is complicated and depends on each state. Alabama and Utah don’t support gambling because of most residents’ religious beliefs. Alaska seems to be doing too well in oil to bother with lotteries. Hawaii didn’t establish a lottery for fear it would hurt the state’s tourism industry, BBC reported. Mississippi and Nevada, meanwhile, don’t have state lotteries because casinos are powerful there and oppose them, according to the Las Vegas Review-Journal. 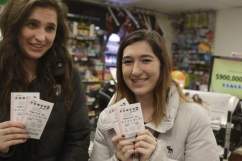 Read More
Lottery, Powerball
wpDiscuz
0
0
Would love your thoughts, please comment.x
()
x
| Reply
Where can you buy Powerball tickets? Here are all the updated details on how to get Powerball tickets in 2018.