This is a photo of Mark Anthony Conditt, the Austin bomber. You can see more photos of the serial bomber below.

“I officially graduated Mark from High School on Friday. 1 down, 3 to go. He has 30 hrs of college credit too, but he’s thinking of taking some time to figure out what he wants to do….maybe a mission trip. Thanks to everyone for your support over the years,” Conditt’s mother, Danene Conditt, wrote with the photo, which she shared on Facebook in 2013.

Here’s another photo of Conditt from his mother’s Facebook page. Mark Conditt lived on North Second Street in Pflugerville, according to local news reports. Police have shut down the area around his home, which is near Wilbarger Street. According to the governor, he lived with two roommates not considered suspects and a “treasure trove” of information was found inside the house.

Another photo shows Conditt with his parents, Pat and Danene Conditt, and his siblings:

Mark Conditt pictured with his parents and family.

Here’s a fuller view of the Facebook-shared 2013 photo of Conditt, 23, the now-dead serial bomber believed to have terrorized the Austin, Texas community. Online records give the suspect’s home as Pflugerville and Austin, Texas, over the years. “He was described as a graduate of Austin Community College’s Northridge Campus who worked at Crux Semiconductor in Austin,” USA Today reported. Conditt appears to have been home-schooled. A 2012 blog provides a glimpse into his political views, although authorities have yet to spell out a motive.

On the blog, Mark Conditt of Pflugerville, Texas, railed against gay marriage and advocated against the release of a terrorist, calling it “plain dumb.” He advocated against abortion, writing, “First, if a women does not want a baby, or is incapable of taking care of one, she should not participate in activities that were made for that reason.” Read more about the writings here. He defined himself in 2012 as conservative. He said in the blog profile section that he liked “parkour.” What is “parkour”? According to the World Freerunning Parkour Federation, Parkour “is the act of moving from point ‘a’ to point ‘b’ using the obstacles in your path to increase your efficiency” and “had its origins in a training program for French Special Forces known as ‘Parcours du combattant’, or ‘The Path of the Warrior.'”

Here are photos of Conditt wearing what is believed to be a wig and gloves as he mailed two packages at a FedEx facility in Austin.

Here he is at the FedEx store mailing out bombs. pic.twitter.com/H012uSQOdP

CBS Austin obtained the below photos from sources and ran them shortly before Conditt was captured and killed himself. He appears to be trying to camouflage his identity in the pictures, but they – and scouring receipts – helped lead police to his identity.

The Austin bombing suspect, believed responsible for terrorizing the Texas community with serial bombings that killed two young men, is dead, the police chief confirmed after a chaotic 24 hours that saw another package explode, a false alarm at a Goodwill store, and then the suspect’s suicide as police surrounded him in Round Rock.

Texas bombing suspect Mark Anthony Conditt, of Pflugerville, died overnight after authorities closed in on him at a motel. He was home schooled growing up, an Austin Community College graduate and was employed by Crux Semiconductor in Austin. APD warn bombs may still be planted pic.twitter.com/O367jC8oJl

In the early morning hours of March 21, police tracked Conditt down and cornered him near a Red Roof Inn in Round Rock, a community near Austin. The Austin police chief confirmed the news that the bomber’s campaign of terror was over in a press conference in the early morning hours of March 21. The bomber died at his own hand, police say. Mark Anthony Conditt blew himself up, committing suicide with his final explosive device inside his car near the motel. In so doing, he took his own life using the same method that he used to take the lives of two other people, promising young men named Anthony House and Draylen Mason.

Here are photos of the two men who died when the bomber’s packages exploded.

Authorities did not release the bomber’s name. However, the bomber was identified as Mark Anthony Conditt by NBC News. The deceased bomber was a 24-year-old white male, the police chief, Brian Manley, said,  providing no other biographical details when the news first broke. He did not provide other details of the bomber’s identity, motive, or even hometown. “We do not understand what motivated him to do what he did,” the chief said. “We do believe all of these are related, and that he was responsible for all of these” bombings.

Manley did describe how police tracked down Conditt. “We started to get information on one person of interest… and as we continued to do our investigations, this person of interest ultimately moved to being a suspect,” the Austin police chief said in the early morning news conference. “We started focusing on his involvement in these crimes. Late last night and early this morning, we felt very confident that this was the suspect.” The chief said witnesses and video sources proved crucial.

I am suspect’s home. We are not identifying him at this time. DPS trooper is blocking street and asked us leave saying the home is not secure. pic.twitter.com/62g77dj7zO

“Sources say the suspect killed himself using an explosive device,” Austin journalist Tony Plohetski wrote on Twitter as news broke, and the chief confirmed that information. Photos of a person then called a person of interest, supposedly wearing a wig, were published not long before the bomber’s death by News 4 San Antonio as authorities recovered the first images of a possible suspect from surveillance video and began closing in on the deadly bomber. The suspect was reportedly pursued by police along I-35.

The Austin police chief said police located the vehicle the suspect was driving and found it at the Round Rock hotel in the Austin area. Tactical teams were arriving, when the suspect’s vehicle started driving away, although authorities are not sure why. Police began following the vehicle. The vehicle ended up stopping in a ditch. “As members of the Austin Police Department SWAT team approached the vehicle,” the suspect detonated a device in the vehicle, killing himself, the police chief said. That knocked one of the SWAT officers back. The suspect is not being named yet by police formally because he has not been positively identified yet by the medical examiner and next of kin were not yet notified, according to the chief.

“We have seen members of our community who lost their lives,” the chief said. He added that police do not know where the suspect has been in the last 24 hours so the community needs to remain vigilant in case there are other packages. The chief said that police know who the suspect addressed the packages he mailed at FedEx to but won’t release those names. They said they had been in contact with those people, however.

Police do not know whether the bomber was intending to plant the device he used to kill himself. “We don’t know what his background his,” the chief said.

The suspect’s death came at the end of an officer-involved shooting situation, reports said. Some reports said earlier that shots were fired.

The ATF was at the scene on I-35. One woman wrote on Facebook, “Wow he was in a hotel near us and when they figured out it was him, he detonated himself. Not in the hotel though. Hmmm Guess that’s that.The end. (I knew they would find him!! )Don’t drive on 35 in Round Rock near 79 it’s closed. Round Rock police say use other

The suspect’s undoing may have been his trip to FedEx to mail two packages – one of which exploded in the San Antonio area at a FedEx facility earlier in the day. That slip up gave police the first images of him wearing the wig.

That all helped lead them to the suspect’s identity and, eventually, his location.

According to NBC Los Angeles, “The confrontation took place between the Austin PD SWAT team and the individual believed to be connected to the bombings.”

Timothy Lindholm wrote on Facebook, “So I was just stuck on 35 in Round Rock and had 15 or so unmarked police cars fly by us as we didn’t move for almost half an hour. A state trooper started walking by letting us know we will all move soon, then he just started running back from where he came. Nothing is on the news anywhere, but there were about 50 or so police cars, swat vehicles and a command center outside of this hotel on the other side of the highway as I drove by! The video doesn’t do it justice. I’ve never seen a scene like this! Fingers crossed that they have the person who is causing the mayhem in Austin surrounded.”

CBS Austin said the wig-wearing person of interest in the first photos was the same person who is now dead, and ID’d as Conditt. “BREAKING: Exclusive photos of Austin bombing ‘Person of Interest’ dropping off 2 packages at Austin @FedEx store. Believed to be wearing wig. Recognize him? Contact: @FBI @Austin_Police,” News 4 reporter Randy Beamer wrote on Twitter on March 20, 2018. Based on the photos circulated by Beamer, the alleged bomber’s mistake may have been the FedEx package that exploded, leading authorities to surveillance video and a sense of his identity.

According to the San Antonio television station, the station “obtained photos of the person investigators believe dropped off two suspicious packages on Sunday. Investigators say this is a person of interest and that the two packages are connected to the string of explosions in Austin.” The station reported that the photos came from “inside a South Austin FedEx Office store on Brodie Lane where the person shipped the two packages.”

One of those packages exploded on Tuesday March 20 at the FedEx facility near San Antonio. It would be the bomber’s last known attack, and injured a worker, although he is expected to survive. 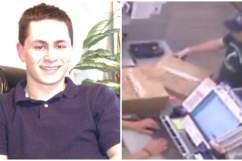 Loading more stories
wpDiscuz
0
0
Would love your thoughts, please comment.x
()
x
| Reply
See photos of Mark Anthony Conditt, the suspected Austin Bomber, who is dead. He was caught in images on surveillance video and a Facebook picture.