Actress and musician Maria Felix is being celebrated with a Google Doodle on what would have been her 104th birthday.

1. Felix Was Born in 1914 in Alamos, Sonora, Mexico, & Became a Beauty Queen as a Teenager

Maria Felix is being celebrated with a Google Doodle on what would have been her 104th birthday.

Maria Felix was born April 8, 1914, in Alamos, Sonora, Mexico, according to The Guardian. She was one of 16 children.

Her family eventually moved to Guadalajara, where she was crowned beauty queen at the University of Guadalajara. Before starting her career in acting, she worked as a receptionist in a plastic surgeon’s office. According to The Guardian, the surgeon often used her as a model to attract clients.

Carlos Fuentes, an author who wrote about Felix in his novella “Holy Place,” told The Telegraph about Felix, she was an “independent woman in a country where the women over the centuries were destined to be nuns or whores” and was “a woman who owned her own body”.

2. She Began Her Acting Career When a Director Stopped Her on the Street to Tell Her She Should be an Actress & Went on to Star in 47 Films

Felix was living in Mexico City when her career as an actress began. She was walking down the street when she was stopped by Fernando Palacios, a director, who persuaded her to get into the business, according to The New York Times.

Her first film, “El Peñón de las Ánimas,” or “The Rock of the Spirits,” debuted in 1942. She went on to star in 47 films in Mexico, Argentina, France, Italy and Spain, and is considered one of the most important figures of the Golden Age of Mexican cinema.

She appeared mostly in Mexican films in the 1940s, before starring in European cinema in the 1950s, working with directors like Jean Renoir and Luis Buñuel.

“Many feminine images have ignited the fantasy of the Mexicans,” Octavio Paz, a Mexican poet, wrote about Felix. “But the myth of María Félix is different. María Félix is a woman — such a woman — with the audacity to defy the ideas machos have constructed of what a woman should be. She’s free like the wind, she disperses the clouds, or illuminates them with the lightning flash of her gaze.”

In his biography of her, Ignacio Taibo wrote, “This was the appearance of a personality who had nothing to do with the rest of Mexican cinema. María was not only a singular beauty. She had a lofty bearing that stood in complete contrast to the traditionally submissive Mexican actress.”

Writer Carlos Monsivais told the Los Angeles Times, “She was beautiful but had a new kind of personality that [conveyed] the idea of dominion. She created an alternative to the Mexican woman on screen, who until then was just beauty or the modesty of suffering. She empowered the idea of Mexican woman as no one before.”

Felix’s last movie role was in 1971. She then retired from acting to focus on her stable of horses. Some of her horses won international equestrian awards.

3. Felix Was a Fashion Icon, Model for Painters & She Was Considered a Muse by Several Writers

Felix “was considered a muse by famous artists like José Clemente Orozco and Diego Rivera, novelists and playwrights like Jean Cocteau, Renato Leduc, and Carlos Fuentes, and musicians like Juan Gabriel and Francis Cabrel. She was also a fashion icon, wearing clothes and jewelry designed expressly for her by famous designers like Christian Dior and Cartier Paris,” Google says in its Doodle description.

Several artists painted portraits of her.

“She consorted with the rich and famous all her life, was dressed by top designers and, in 1984, was nominated in France and Italy as one of the world’s best-dressed women. King Farouk of Egypt allegedly offered her Nefertiti’s crown for one night of love,” The Guardian wrote in her obituary.

After her death, then-Mexican President Vicente Fox said, “As an artist she gave everything to Mexico, [including] a great international presence…. I admired her very much, and we Mexicans have suffered a huge loss.”

4. She Had a Chance to Star in Hollywood Films, but Turned Them Down Because She Was Only Offered Stereotypical ‘Latin Spitfire’ Roles

Felix met filmmaker Cecil B. DeMille at the Metro-Goldwyn-Mayer Studios and had an opportunity to star in Hollywood films, but turned them down and never launched a career in American film.

“She did not speak English and never accepted work in Hollywood, where directors offered her only stereotyped parts as a Latin spitfire,” The New York Times wrote in her obituary.

She said about Hollywood, “They only give me huehuenche (Indian) roles.”

Felix was married four times, according to The New York Times. She was first married to Enrique Álvarez Alatorre, a cosmetics sales agent, from 1931 to 1938. She had her only child, a son, also named Enrique, in 1935. Her son, who died in 1996 of a heart attack, was a TV and movie actor.

“Enrique is a very gifted man, with admirable common sense. He’s my best friend. I have so much fun with him. He’s not a ‘mama’s boy’ as many believe,” she said about her son. “Self-employed, fight like being independent. He has his own career, his audience, his poster and assumes his responsibilities without relying on me.”

In 1945, she married Agustín Lara, a famous Mexican composer. They divorced two years later. She then married Jorge Negrete in 1952, and he died in 1953. Her final marriage was to Romanian-born French banker Alexander Berger, from 1956 until his death in 1974.

After Berger’s death, she was in a long relationship with Antoine Tzapoff, a Russian-French painter, until her death.

“I always chose my men,” Maria Felix said, according to The Telegraph. “I have waged many difficult wars to defend my liberty. Love is also a war.” She added, that men, “treated me fabulously well. But sometimes I had to hurt them to keep them from subjugating me. I have been a woman with the heart of a man. A woman of war.”

Felix died on April 8, 2002, her 87th birthday, of cardiovascular disease.

After her death, writer Carlos Fuentes, told The New York Times, “She was a goddess. There were no eyes in the world more beautiful than María Félix’s. She was a magnificent character, and, along with Dolores del Rio, the greatest beauty of the golden age of the Mexican cinema.” 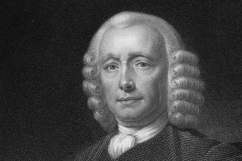 Read More
5 Fast Facts, Breaking News, Google Doodle
Follow Heavy ↓
Maria Felix, the iconic Mexican actress and singer, is being celebrated with a Google Doodle on what would have been her 104th birthday.