Although the new Han Solo movie, Solo: A Star Wars Story, doesn’t have an end credits scene, it does have a dedication. The movie is dedicated to Allison Shearmur.

That has a lot of people wondering: Who was Allison Shearmur and why was Solo dedicated to her? She was a producer. LucasFilm posted a statement remembering her in January 2018 that provides details of her significance to the organization. This is what the organization wrote:

Allison Shearmur passed away on Friday, January 19. She was a producer on Rogue One and Solo, along with many, many other films and TV projects, including the Bourne franchise and the Hunger Games series. She was an incredible creative force in the movie industry, known and respected by all with whom she worked. And for us, she was more than just a great producer — she was a beloved member of the Lucasfilm family. She was our Alli.

Alli was just 54 at the time of her passing, an age that feels far too young for someone so gifted and giving, who had so much more left to do. We’re grateful for everything she brought to Star Wars and into our lives, which were all made richer and brighter through her. Her independent, positive spirit will live on in her beautiful children Imogen and Anthony, and with her husband Edward. We miss her deeply.

The Times reported that Shearmur worked over the years for Universal Pictures, Paramount Pictures, and Lionsgate, holding prominent positions at the studios in things like feature film production She was involved in movies like Erin Brockovich and American Pie.

Shearmur worked on Solo even has she was being treated for her cancer. In fact, her husband told the Times that she attended a Solo visual effects meeting the day before she died.

When Shearmur died, Ron Howard, who directed Solo, tweeted out a tribute to the producer, writing, “A tragic loss. My heart goes out to Alli’s family whom she adored. Alli was an important colleague & friend over many years who never backed away from any challenge but at all times was both powerfully effective & graciously humanistic. RIP.”

Producer Allison Shearmur attends the Premiere of Screen Gems’ “Pride and Prejudice and Zombies” on January 21, 2016 in Los Angeles, California.

The concept of an end credits surprise at the end of movies was mostly popularized by the Marvel franchise. Star Wars: The Last Jedi, which featured Carrie Fisher’s swan song, also carried a dedication. It was a single sentence tribute to Princess Leia. The Leia/Carrie Fisher tribute reads simply: “In loving memory of our princess, Carrie Fisher.” 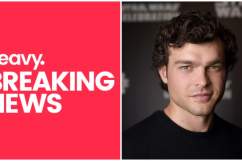 Solo After Credits: Is There a Han Solo End Credits Scene?

Loading more stories
wpDiscuz
0
0
Would love your thoughts, please comment.x
()
x
| Reply
Who was Allison Shearmur? That's what fans of the new Han Solo movie are wondering after it was dedicated to her. Learn about Shearmur and her cause of death.