Meghan Markle’s mom and dad, Thomas Markle Sr. and Doria Ragland, have handled the pressure of the media attention thrust upon them very differently.

Both parents have been propelled into the public eye by virtue of their daughter’s marriage to Prince Harry. Whereas Ragland has kept a low profile and stayed out of the press, Thomas Markle Sr. has become the epicenter of drama, eventually backing out of walking his daughter down the aisle after a photo staging scandal and heart surgery. Thomas Markle’s two children by his first wife – Meghan’s half siblings – have repeatedly criticized Meghan in the news media.

Meghan’s parents are divorced; she appears to be particularly close to her mother, who flew to England to be at her side and is expected to play a prominent role during the Royal Wedding.

1. Meghan’s Dad Had a Heart Attack a Few Days Before the Wedding After He Admitted Staging Photos

Thomas Markle, 73, found himself in the midst of a photo staging scandal and has backed out of attending the Royal Wedding, where he was set to walk Meghan down the aisle, TMZ reports. Daily Mail then reported that Meghan Markle was pleading with her father to change his mind, saying that she and Prince Harry both feel that Tom Markle has been under extreme pressure and stress.

Public opinion about Tom Markle’s actions widely diverged. Some felt it was awful that Markle would stage photos and not attend his daughter’s wedding; others felt that the father is basically an average Joe who was thrust unfairly into the public eye without proper assistance from the Palace.

“This is a deeply personal moment for Ms. Markle in the days before her wedding. She and Prince Harry ask again for understanding and respect to be extended to Mr. Markle in this difficult situation,” Kensington Palace said in a statement. By May 15, Markle was saying he wants to go to the wedding after all if his health permits, and he told TMZ that his daughter had texted him a loving message and tried to call him. However, later in the same day, he revealed he can’t go because he now needs heart surgery. It was all a lot of drama in the days leading up to his daughter’s nuptials.

Before he was caught up in a photo staging scandal, Thomas Markle was headed to the Royal Wedding – to walk his daughter down the aisle. In early May 2018, Kensington Palace released a statement confirming that both of Meghan’s parents were going to the wedding and would play prominent roles in it.

“Prince Harry and Ms. Markle are very much looking forward to welcoming Ms. Markle’s parents to Windsor for the wedding,” the statement read. “Mr. Thomas Markle and Ms. Doria Ragland will be arriving in the UK in the week of the wedding, allowing time for Prince Harry’s family, including The Queen, The Duke of Edinburgh, The Prince of Wales, The Duchess of Cornwall, and The Duke and Duchess of Cambridge, to spend time with them before the big day.”

The statement continued: “Both of the bride’s parents will have important roles in the wedding. On the morning of the wedding, Ms. Ragland will travel with Ms. Markle by car to Windsor Castle. Mr. Markle will walk his daughter down the aisle of St George’s Chapel. Ms. Markle is delighted to have her parents by her side on this important and happy occasion.”

However, then, photos of the reclusive Thomas Markle, who is retired and living in Mexico, surfaced across the world. They showed him seemingly getting ready for the wedding by getting measured at a store, lifting weights on the beach, and staring at a photo of Meghan and Prince Harry in an Internet Cafe. The UK Daily Mail then revealed, however, that Thomas Markle appeared to have worked with a photographer to stage the photos. The next day, Thomas Markle announced he wasn’t going to the wedding after all.

Prince Charles has stepped forward to walk Meghan down the aisle in her father’s absence.

Here are some photos Megan’s mom at the wedding:

Doria Ragland is now in my heart, so moving. #motherofthebride #royalwedding ❤️ pic.twitter.com/VVtqciD2MU

Doria Ragland. She is love and she is loved! A proud, beautiful, brave, and loving Superwoman! #RoyalWedding #MeghanMarkle #PrinceHarry #DukeAndDuchessOfSussex pic.twitter.com/eVZHe4mX3q

The Prince of Wales and Doria Ragland, mother of the bride, depart St. George's Chapel after the #royalwedding. More photos: https://t.co/DgG9A58xH1 pic.twitter.com/yWsF62rK5K

He added: “My baby girl is a duchess and I love her so much.” He added: “Now I pray that Harry and Meghan can go on a nice honeymoon and rest and relax, and all of my relatives will just shut up about everything.” 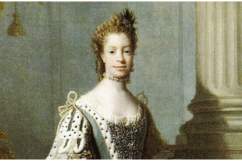 Queen Charlotte: Was She the First Black English Queen?

2. Meghan’s Dad Was a Lighting Director Drawn to Her Mom’s ‘Sweet Eyes & Her Afro’

She wrote in Elle that her father, Thomas Markle, had grown up in Pennsylvania and described how he insisted “If that happens again, you draw your own box” when a teacher tried to make her check black or white in an English class census exercise.

3. Doria Ragland Is a Yoga Instructor Who Divorced Tom Markle When Meghan Was 6

Both Prince Harry and Meghan Markle are children of divorce, which might be something they share in common. Doria Ragland, who has worked as a yoga instructor, was divorced from Thomas Markle when Meghan was 6-years-old, according to The Sun. It was Tom Markle’s second marriage, and he had two children – Samantha Grant Markle and Tom Markle Jr. – with his first wife. Both half siblings have been sharply critical of Meghan at times.

Doria Ragland is black and Thomas Markle is white; Meghan Markle has written publicly about her bi-racial heritage. “I was home in LA on a college break when my mom was called the ‘N’ word. We were leaving a concert and she wasn’t pulling out of a parking space quickly enough for another driver,” Meghan wrote in Elle Magazine in a poignant essay.

She added in the essay: “Being biracial paints a blurred line that is equal parts staggering and illuminating. While my mixed heritage may have created a grey area surrounding my self-identification, keeping me with a foot on both sides of the fence, I have come to embrace that. To say who I am, to share where I’m from, to voice my pride in being a strong, confident mixed-race woman.”

Prince Harry once caused controversy when he said of Meghan’s adaption to the Royal Family’s traditions, “She’s done an absolutely amazing job, she’s getting in there and it’s the family that I suppose she’s never had.” Meghan’s half-sister, Samantha Grant Markle, then retorted on Twitter: “She has a large family. She always did. Our dad is amazing and completely self sacrificing. We made it so that she had two houses. How fun it was!”

The royal wedding has obviously caused a lot of stress to Meghan’s parents. However, she has spoken positively about both of them in the past, labeling her mother as “free-spirited” and her father as “thoughtful” and “caring.”

“Both my parents came from little, so they made a choice to give a lot,” Meghan also once said.

She told Glamour magazine of her mom: “We can just have so much fun together, and yet I’ll still find so much solace in her support. That duality coexists the same way it would in a best friend.” She wrote on her lifestyle blog that her mom refers to her as “flower.”

Meghan said on her mom to Glamour: “My mom’s a yoga instructor, but she does social work, as well, and she works specifically with the geriatric community. For me to watch this level of life-long sensitivity to nurturing and caregiving, but at the same time my mom has always been a free spirit. She’s got dread locks and a nose ring. She just ran the LA Marathon.”

On a father’s day photo in 2016, Meghan wrote, “Happy Father’s Day, daddy. I’m still your buckaroo, and to this day your hugs are still the very best in the whole wide world. Thanks for my work ethic, my love of Busby Berkeley films & club sandwiches, for teaching me the importance of handwritten thank you notes, and for giving me that signature Markle nose. I love you xo – Bean.”

5. Meghan’s Mom Doria Was Working as a Social Worker But Recently Quit Her Job & She Had Tea With the Queen

The Royal Family has rolled out the welcome mat for Meghan’s mom; she has met Queen Elizabeth and Prince Philip (going to tea, no less!), Prince Charles and Camilla, and Prince William and Kate, among others. She will be accompanying her daughter by car to the wedding, Kensington Palace revealed.

Doria Ragland was working as a social worker in the Los Angeles area, but, with the Royal Wedding looming, she has quit her job to start her own practice, according to US Weekly.

“Doria is no longer working at the mental health clinic in the Los Angeles area. It was Doria’s decision to leave,” a source told US Weekly. “She has talked about starting her own private practice, focusing on working with elderly patients.”

On Facebook, Doria Ragland writes that she works at Didi Hirsch Mental Health Services and Wise And Healthy Aging, went to Fairfax High School, and lives in Los Angeles, California.