What gives with Justin Trudeau’s eyebrows? That’s what some critics on the Internet want to know, as photos and videos showing Trudeau’s seemingly half-detached eyebrow sparked talk that the Canadian prime minister’s brows might be… fake. You can see the “evidence” below. However, others say it was just a trick of light and the rumor is the only thing that’s false.

I will never forgive Twitter for making me Google “Justin Trudeau eyebrows” at 2 a.m.

Daily Caller pointed out that Trudeau appeared like one of his eyebrows was slipping out of place as he spoke to reporters after the G7 summit. The summit sparked a serious debate on trade as President Donald Trump and Justin Trudeau shared strong words, of course. However, a sub debate – and a far less serious one – developed over the PM’s somewhat bushy brows. Are they fake? Judge for yourself from the video and photographic evidence below.

However, Buzzfeed News reports that the conspiracy theory about Trudeau’s eyebrows is itself false. According to Buzzfeed, what appears in video to be a detached eyebrow is really just bad lighting. “It shows that bad lighting was the culprit, giving Trudeau’s left brow a weird shadow and making it appear as though it was separating from his face,” Buzzfeed insists, labeling the fake eyebrow theory a “bizarre rumor.”

That didn’t stop the half-missing eyebrow from sparking memes and jokes on Twitter.

Trudeau’s eyebrow mishap sent Twitter into overdrive. “Justin Trudeau’s left eyebrow detached after meeting Trump — so what? These days, who doesn’t wear fake eyebrows?” wrote one man on Twitter. “I don’t like spreading fake news so I wanted to check the source material. It checks out. Look at 27:25 here on CPAC. The only thing that’s fake may be the eyebrows. #EyebrowGate,” wrote another.

Justin Trudeau wears fake eyebrows… that fell off after he met with Trump st G-7.

It’s the eyebrow on his left, and your right, if you’re look at the above video, by the way.

I don't like spreading fake news so I wanted to check the source material. It checks out. Look at 27:25 here on CPAC. The only thing that's fake may be the eyebrows. #EyebrowGate https://t.co/BVEhcL0Xkl

Just so you know, yes it's true. Justin Trudeau wears fake eyebrows and takes really good care of us most of the time. But he's really intimidated by @realDonaldTrump, and the sweat loosened the glue that keeps us attached. No biggie

Watch the video and decide for yourself.

Just because the media made fun of Harper's helmet hair and Trump's wispy whatever-that-is, doesn't mean that Trudeau's eyebrows are fair game. Shame on you. Shame on you all. (via @davidd_dds) pic.twitter.com/OTmoEvveFg

The big news from this weeks G7 Summit in Quebec is that Canadian Prime Minister, Justin Trudeau's eyebrows became detached from his forehead. #Trudeauseyebrows#G7Summit #EyebrowGate pic.twitter.com/sB8Sv36m8R

However, some people analyzed the structure of Trudeau’s eyebrows to opine that they aren’t false at all.

While a fake eyebrow scandal would rule, the photographic record shows Justin Trudeau's left eyebrow grows thicker on the bottom along the supraorbital ridge. A streak of thinner hair parts upward closer to the glabella. This is why it can look like a fake eyebrow is falling off. pic.twitter.com/yL7QbAk2mN

And Buzzfeed says that photos and videos from the full news conference show that Trudeau’s eyebrow was, in fact, intact. “I can’t believe this has to be said, but Justin Trudeau obviously didn’t have a ‘fake eyebrow’ falling off during his press conference with Emmanuel Macron,” a Buzzfeed journalist wrote on Twitter. “It’s a trick of the light. When looking down, the shadow makes his left brow look weird. When looking up, it looks normal.”

Again, judge for yourself:

I can't believe this has to be said, but Justin Trudeau obviously didn't have a "fake eyebrow" falling off during his press conference with Emmanuel Macron.

It's a trick of the light. When looking down, the shadow makes his left brow look weird. When looking up, it looks normal pic.twitter.com/Xnlaol0MvR

The power of lighting.

To appreciate what people are saying about Justin Trudeau’s eyebrows, you have to look at photos of Trudeau before the G7 press conference. See above for a picture of his eyebrows looking… normal.

Justin Trudeau with fake eyebrows? Too hilarious of a concept for the meme and GIF makers to ignore, whether it’s true or not.

.@rcmpgrcpolice are apparently on alert after one of Justin Trudeau's eyebrows escaped. #tcot pic.twitter.com/XcC13aiV50

So which one do you like better folks? I need some suggestions. I might spice up the brows a bit.#WhichBrowDoYaGot pic.twitter.com/gWd5WHGulP

Trudeau's next set of eyebrows will be bigger and better than ever. pic.twitter.com/h6jUNFzIDt

You can learn more about Pierre Trudeau’s wife, Sophie, here: 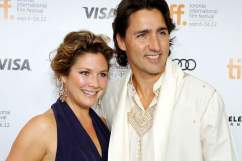