John McCain has lost his battle with brain cancer and he leaves behind a family of 7 children. One of his kids is son Andrew, who is also known as Andy, has made a successful life for himself. Andrew and his brother Doug were actually adopted by John when he married his first wife, according to ABC News. Andrew and Doug later welcomed their sister Sidney with their parents.

In 1980, John McCain divorced his first wife and married second wife Cindy that same year. John and Cindy then went on to have three children – Meghan, Jack and Jimmy. They also adopted a daughter named Bridget, from Bangladesh. Having 7 grown children can make family gatherings difficult, navigating the different schedules, but, according to ABC News, John McCain likes to get all of his kids together at least once a year. Let’s get to know more about John’s family, focusing on son Andrew, his background, and who he has become today.

1. Andrew McCain’s Biological Father Was a Classmate of John McCain

Andrew McCain’s mother is Carol Shepp and his father is a man named Alasdair E. Swanson. Both Alasdair and John were attending the United States Naval Academy in Annapolis when they met Carol. In school, Alasdair was successful in basketball and football. He then went on to become a Navy pilot.

In 1958, Alasdair and Carol married and had two children together – Andrew and Doug. The family lived together in Pensacola, Florida, but Carol and Alasdair ultimately divorced in 1964. Carol actually sued Alasdair for infidelity and, the LA Times reported that Carol and John McCain began dating shortly after the demise of her first marriage.

On July 3, 1965, John McCain married Carol, who was a model from Philadelphia, Pennsylvania. He went on to adopt Carol’s two sons. Unfortunately for Carol, like her first marriage, infidelity was an issue. The LA Times has reported John revealing that, “My marriage’s collapse was attributable to my own selfishness and immaturity. The blame was entirely mine.” Despite this, John McCain said that he has a good relationship with ex Carol today.

2. He Is the President of Arizona’s Largest Beer Distributor

According to Vanderbilt University’s bio on Andrew, he is the President and Chief Operating Officer for Hensley Beverage Company. The company is one of the largest, privately-held companies in Arizona and sells a variety of Anheuser-Busch products, along with teas, wine, craft brews, and specialty beverages. Hensley & Co. reported that Andrew was appointed as President in 2017.

Over the years, Andrew McCain has worked his way up in the company and he was also previously the company’s CFO. Andrew has overseen Hensley & Co.’s financial operations, treasury, accounting, strategic planning, sales and marketing. Upon accepting the role as President, Andrew’s statement via Hensley was that, “It is an honor to have the opportunity to now serve Hensley at this level, and to continue to grow the organization as the preeminent market leader that represents world class products and superior customer service.”

Andrew received his Bachelor of Arts degree in Mathematics in 1984 and his MBA in 1986, both at Vanderbilt University. In addition to becoming the President and COO at Hensley, he also took on many other esteemed roles. He has been a board member for the Arizona Super Bowl Host Committee, Chairman of the Hensley Employee Foundation, a Patrons Committee member of United Methodist Outreach Ministries’ New Day Centers and he has been Chairman of the Greater Phoenix Chamber of Commerce.

3. Hensley & Company Was Inherited From Andrew’s Step-Mother and All the Kids Share Ownership

Really @MeghanMcCain? John McCain married Cindy Hensley (2nd wife) & heiress to her fathers stake in Hensley & Co of Phoenix, the daughter of a multimillionaire Anheuser-Busch distributor when his first campaign was in debt up to its eyeballs.https://t.co/DlT3ADLaXa

Prior to Andrew McCain becoming the President of the company, Robert Delgado was the President, and he assumed the role in 1994. Today, Delgado remains the Chief Executive Officer of Hensley. He is also a board member, as part of the Phoenix Children’s Hospital, the Biltmore Bank of Arizona and the Stardust Foundation.

James Willis Hensley, aka Jim Hensley, died in 2000 and had most of the controlling stock of the company at the time. Hensley left most of his estate to Cindy, while his daughter Kathleen and her family received a sum, along with other items from Hensley’s estate and, according to Business Insider, this had an effect on Cindy and Kathleen’s relationship. Kathleen, aka Kathy, reportedly inherited just $10,000. 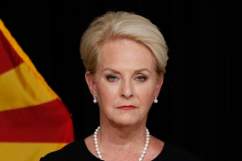 ROSS PEROT who paid Carol McCain's medical bills says this about John McCain: The American people have been TAKEN by a man who is unusually SLICK AND CRUEL…https://t.co/SvOjwTo6Se pic.twitter.com/t0cc8zncvb

Andrew McCain’s mom, Carol Shepp, suffered a major car accident when her then-husband, John McCain, was a prisoner of war in North Vietnam. On Christmas Eve in 1969, Carol was driving in Philadelphia and her car skidded, resulting in her hitting a utility pole. The accident occurred in an icy and snowy area and Carol was alone while driving, according to the LA Times. She was thrown from the car and into the snow, which resulted in two smashed legs, a broken pelvis, ruptured spleen and a broken arm.

After the accident Carol underwent many operations and was in the hospital for months, but she kept her husband in the dark about the accident, since he was overseas. While recovering, her sons, Andy and Doug, reportedly stayed with friends in Florida, while her daughter was with family. The LA Times reported that Carol lost 5 inches in height, as a result of her surgeries and treatment. According to the Daily Mail, Carol had to learn how to walk again.

When Carol and John divorced, part of the settlement was that Carol’s medical bills would be covered for life. According to the Daily Mail, Carol said, “My accident is well recorded. I had 23 operations, I am five inches shorter than I used to be and I was in hospital for six months. It was just awful, but it wasn’t the reason for my divorce … My marriage ended because John McCain didn’t want to be 40, he wanted to be 25. You know that happens … it just does.” John married current wife Cindy within weeks of his divorce from Carol.

5. In 2008 Andrew Quit as Director of the Failed Silver State Bancorp for “Personal Reasons”

Prior to becoming the President of Hensley & Co., Andrew McCain was a Director for Silver State Bancorp. Ultimately, the bank company failed and, according to the Huffington Post, prior to the failure, in 2008, Andrew quit as director for “personal reasons.” At the time of Andrew’s departure, Silver State Bank was on “shaky financial footing.”

According to a statement from Arizona Republic, “One of U.S. Sen. John McCain’s sons has resigned from the board of a Nevada-based bank that operates four branches in Arizona, just five months after he was appointed director.” Mark Faulking reported via his website Faulking Truth that, “In yet another bizarre development in the saga of CMKM Diamonds, better known as CMKX, one of the largest financial frauds in history, Andrew McCain, the son of presumptive Republican presidential candidate John McCain, resigned from the Board of Directors of Henderson, Nevada based Silver State Bank, the bank where hundreds of millions of dollars was deposited as it was stolen from CMKX shareholders … But the younger McCain, who had only been with Silver State Bank for a little over four months after Choice Bank, where McCain was director, was taken over by Silver State, might have to answer questions of his own. Silver State Bank has its own history of problems, and it appears that Andrew McCain either ignored the bank’s past woes, or didn’t properly research the company before joining the Board of Directors … Andrew McCain served on the bank’s Audit Committee, which means his responsibilities included, according to the company’s bylaws, an understanding of finance and accounting.”

The Review Journal reported that one month after McCain resigned, Silver State Bank was seized and sold. The bank was the 11th bank failure in the country that year. Several executives and officers of the company had resigned in the months leading up to the failure, including Andrew McCain.

Loading more stories
wpDiscuz
0
0
Would love your thoughts, please comment.x
()
x
| Reply
John McCain has 7 children. Get to know more about his family, focusing on his son Andrew.