One of the oddest comments during the first and only debate between New York Governor Andrew Cuomo and former Sex and the City actress Cynthia Nixon came when Cuomo accused Nixon of asking for a favor in the form of a tea house for Sarah Jessica Parker.

Parker was Nixon’s co-star on the hit television show that earned Nixon her own measure of fame as Miranda to Parker’s Carrie character. The exchange led some people on Twitter to wonder what the heck Cuomo was talking about. You can watch video of the tea house comment here:

Cuomo accuses Nixon of being a corporate shill because she apparently forwarded an email from Sarah Jessica Parker regarding an NYC teahouse business complaint on to Cuomo's office. This accusation is really weird, tho. #NYGovDebate pic.twitter.com/HhgCETuEFl

What was Cuomo talking about? Jillian Jorgensen, City Hall bureau chief for the New York Daily News, explained in a tweet: “The Sarah Jessica Parker tea house thing is that SJP emailed Nixon with a complaint from the owner of tea shop Tea & Sympathy, which Nixon emailed on to the mayor’s team.”

The Sarah Jessica Parker tea house thing is that SJP emailed Nixon with a complaint from the owner of tea shop Tea & Sympathy, which Nixon emailed on to the mayor’s team.

Specifically, Cuomo said,”A tea house for Sarah Jessica Parker, that wasn’t a favor?” Nixon: “I don’t even know what you’re referring to.” Cuomo: “Well, you should read the newspapers.” Nixon: “Alright.” The debate took place at Hofstra University on August 29, 2018.

The debate had already taken an unusual turn before it started when an aide for Nixon alleged that cold temperatures in the debate room would be sexist. Cuomo is said to like cold rooms, although he claimed he didn’t ask for a specific temperature to be set, whereas Nixon’s side wanted the room set at 76 degrees.

The tea house moment wasn’t the only interesting exchange during the debate, which is expected to be the only such encounter between the two Democrats. It also included these exchanges: “Can you stop interrupting?” Cuomo said to Nixon.

But it was the tea house comment that got a lot of the social media buzz.

“I need to know more about Sarah Jessica Parker’s teahouse. What is a teahouse. How does one acquire and do with it? #nygovdebate,” wrote another. “I don’t know or care if it’s true, but I totally want to go to Sarah Jessicas Parker’s tea house,” wrote one woman.

me: hi can i get some tea

barista: sure. this is sarah jessica parker’s teahouse, we have a fine selection.

I'm having visions of Sarah Jessica Parker and Cynthia Nixon gathering monthly at their sacred “Tea House” to spill the tea on Kim Cattrall pic.twitter.com/7uScuRJSab

about that tea house tho…

When I was watching Miranda in the #NYGovDebate everyone was asking about me and the #teahouse couldn’t help but wonder… why is she debating charlotte’s friend Anthony? pic.twitter.com/UvlzQJjkAz

You can read more about the cold temperature debate in the New York governor’s race here: 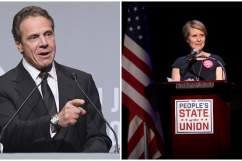