Getty Critics accused Ivanka Trump of texting at John McCain's funeral, but it was unclear what she was doing when she looked down.

Critics are accusing Ivanka Trump of texting at John McCain’s funeral. However, Ivanka’s supporters have pointed out that, in the video widely circulating on Twitter, you can’t see what the president’s daughter is looking down at.

For anyone knows, it could even be the funeral program, one supporter pointed out. You can watch video of the moment below and decide for yourself.

The controversy erupted after the video circulated on social media; Ivanka and her husband, Jared Kushner, were in attendance at McCain’s memorial service in Washington D.C., although her father, President Donald Trump, was very prominently not invited. (Donald Trump spent the funeral at his golf club tweeting about Canada and NAFTA. You can read the president’s tweet here.)

Video Captured Ivanka Trump Looking Down During the Memorial Service

Ivanka texting at McCain’s funeral.
Why am I not shocked. pic.twitter.com/LkqHjUNV8t

After a video captured Ivanka looking down during the memorial service, there was no shortage of people accusing Ivanka of texting.

Meghan McCain is talking about her father being shot down, captured and tortured.

However, others thought the criticism was unfair, especially because it was based on an assumption: You can’t see what Ivanka is looking down at in the video.

Ivanka Trump is worthy of scorn but getting vilified for texting during the McCain funeral is silly
1) you can’t see a phone
2) we loved Aretha’s texts
3) as a mother of 3 she might need to answer a text
4) if she’s trending let it be for getting arrested. pic.twitter.com/rzBMw05hGQ

Some Trump supporters felt it was wrong that Ivanka and Jared had to sit through swipes at Donald Trump during the service. Although he was not mentioned by name, some of the comments had a subtext that was clear, such as when Meghan McCain said, during her eulogy, “America does not boast because she does not have need to. The America of John McCain has no need to be made great again, because America was always great.”

Broader Trumpworld livid about McCain’s funeral, confused about why Javanka sat through it.

Meghan added: “The real thing, not cheap rhetoric from men who will never come near the sacrifice he gave so willingly, nor the opportunistic appropriation of those who lived lives of comfort and privilege.”

Trump tweeted later in the day:

What Were Ivanka Trump and Jared Kushner Doing at John McCain's Funeral? Ivanka was texting…. pic.twitter.com/7PWbkpH9Fa

Some Ivanka and Jared critics also accused the couple of being “funeral crashers” who should have stayed away from the memorial service because of the bad blood between Donald Trump and John McCain over the years (most controversially, Trump once essentially accused McCain of not being a war hero because McCain was captured.)

However, Katie Rogers, the White House correspondent for The New York Times, revealed that Ivanka and Jared were invited by Sen. Lindsey Graham, a close friend of John McCain’s, who cleared the invite with McCain’s widow, Cindy, first.

Ivanka Trump was asked to attend the funeral by @LindseyGrahamSC when they met on Capitol Hill earlier this week and she shared her condolences, per a White House official. Graham said it would be a nice gesture for Ivanka & Jared to attend, but cleared it w/ Cindy McCain first.

“Ivanka Trump was asked to attend the funeral by @LindseyGrahamSC when they met on Capitol Hill earlier this week and she shared her condolences, per a White House official. Graham said it would be a nice gesture for Ivanka & Jared to attend, but cleared it w/ Cindy McCain first,” wrote Rogers on Twitter.

Other members of Trump’s administration did attend the funeral, such as Defense Secretary James Mattis and Chief of Staff John Kelly, military men who also accompanied Cindy McCain when she visited the Vietnam Veterans Memorial wall. 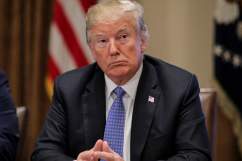 Loading more stories
wpDiscuz
0
0
Would love your thoughts, please comment.x
()
x
| Reply
Critics are accusing Ivanka Trump of texting at John McCain's funeral, although it's not clear what she was looking down at.