Meghan McCain is a journalist and correspondent, who has become a co-host on the morning talk show The View. Her husband, Ben Domenech, is a conservative TV commentator as well. Domenech has also worked as a writer, editor, and blogger. He is the founder of the political online magazine “The Federalist” and the co-founder of the blog RedState. Prior to meeting Domenech, in 2015, McCain told the LA Times that she wasn’t sure she would ever get married.

McCain explained that, “I am still dating and love my job and not ready to settle down at all. I spend a lot of time dancing in gay bars and want my gay friends to be able to get married, but I don’t know if I ever want to get married and have kids. And I think that’s a common struggle.” In just two years, McCain would become a married woman. Get to know the man who changed her mind about marriage in our facts below.

1. Meghan McCain Is Not Ready for Children Yet

Domenech and McCain do not have any children together yet. In an interview with People, McCain said she is “not quite there yet”, though her mother, Cindy McCain can’t wait for grandchildren from the couple. McCain joked about her mother’s excitement for her to get pregnant, revealing, “She has never asked me before and then all the sudden she brings it up all the time. It’s hilarious and uncomfortable.”

As for McCain’s father, Senator John McCain, she said that he had different advice on kids for her. She recalled him telling her, “He’s just like, ‘Do whatever you want.'”

When it comes to McCain’s parents, they had four children together, one of whom was adopted from an orphanage in Bangladesh. Dad John also had one child from his previous marriage to Carol Shepp and he had adopted Shepp’s two sons. This made a total of seven kids, including Meghan McCain. In 2001, John McCain told Dad Mag that a family of children is so important. He said that, “There is nothing in life like a child that you can nurture and love. The reciprocation of that love and nurturing is a thousand times more beneficial to you than it is to the child.” 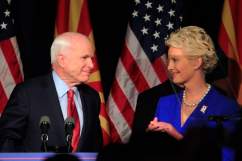 According to Business Insider, John McCain went for a a regular physical on Friday, July 14, 2017, at the Mayo Clinic in Scottsdale, Arizona. Unfortunately, the brain scan that the senator underwent discovered an issue and he almost immediately went under the knife. It was then revealed that he had brain cancer.

Domenech and McCain became engaged in July 2017, the same month in which John McCain was diagnosed, but it wasn’t until November 2017 that McCain revealed she was engaged, according to Entertainment Weekly. She announced the news on her talk show The View and said that, “You may have read something about me on the Internet last night. I’m engaged! … We’ve been together for years. We’ve been engaged for awhile and it’s a secret. I was hoping to get married and people wouldn’t find out, but people talk sometimes.”

She then added, “We got engaged because we decided to sort of celebrate life and celebrate being alive. It’s not the most romantic story, but he is my partner.” McCain also said that she had been single for so long that she never thought she’d get married, which she did, just weeks after her engagement announcement.

John McCain died on August 25, 2018, just one day after publicly revealing that he had stopped treatment. He died days before his 82nd birthday and daughter Meghan McCain spoke at his several of his funeral services.

3. The Couple Moved Up Their Wedding Because of John McCain’s Cancer Battle

Meghan McCain and her husband were married on November 21, 2017 and People reported that they moved up their wedding in order to be sure that her father could attend. But, there was a slight snag in the bride’s plans. Days before the ceremony, McCain’s father tore his Achilles tendon and was unable to walk her down the aisle, so she came up with a new idea. Her brother, Jimmy, stepped in to help out.

McCain explained, “He stepped in to walk me down the actual aisle and then my dad gave me away at the very end. I had nerves right before I was going to walk out, but Jimmy was making me laugh the entire time.” McCain said that her father’s diagnosis made her reevaluate her life and amplified her love for now-husband, Domenech. She revealed to People that, “We were already talking about getting married, but this made it official. There was something about Ben being there for me, at my father’s treatments. I was like, ‘This is love.’ I felt this overwhelming sense of time and my own mortality. We ended up saying, ‘Let’s do this now.’”

She continued, saying, “We were originally going to elope before everything happened with my dad, but obviously all these things have taken on new meaning.” Husband Domenech added that, “This brought into focus how important it was for Meghan to have her dad see her get married, and to have that happen while he was still fully there and fully able to participate. This was something that she needed.”

McCain said that they moved up all of their wedding plans because her father’s illness was such an unpredictable disease. His being at her wedding was the most important thing for her. Perhaps that’s why she and her husband included tributes to her father throughout the event. People reported that the wedding took place at McCain’s parents’ ranch and the menu included some of her father’s favorites.

4. Domenech Was Accused of Plagiarism by The Washington Post

My husband, a cigar and a puppy ?

Over the years, Domenech has had some things to overcome in his writing career. In 2006, The NY Times reported that Domenech was working as a blogger for The Washington Post and resigned after being accused of plagiarizing multiple articles from others. Some of his posts appeared to be copied from works including the National Review Online, The New York Press and The Flat Hat, the student newspaper at the College of William and Mary, which Domenech attended. Initially, Domenech denied the allegations, but issued an apology in a post on RedState.

According to Mediaite, in 2013, Domenech dealt with another issue in his career. Buzzfeed reported that Domenech allegedly took $36,000 from a lobbyist to write propaganda for the Malaysian government. Domenech was reportedly a subcontractor for a man named Joshua Trevino in the incidents that led to a federal filing.

Buzzfeed reported that Domenech “was retained by Josh’s Trevino Strategies and Media PR firm in 2010 with the general guidance to write about Malaysia, particularly the political scene there.” Domenech explained, “I did not ever have anyone looking over my shoulder for what I wrote, and the guidance really was just to write about the political fray there and give my own opinion. Of course, Josh picked me knowing what my opinion was — I stand by what I wrote at the time and I continue to be critical of Anwar Ibrahim, who I think is a particularly dangerous fellow.”

My shelter from the storm – when life keeps throwing curveball after curveball…. @btdomenech

John McCain’s funeral took place over several days of events, including lying in state twice and multiple ceremonies in his honor. Meghan McCain spoke at a couple of the ceremonies and, at one of the events, Meghan McCain leaned over her father’s coffin in tears. According to AZ Central, Twitter broke out in a storm of memes and images of McCain’s heartbreaking moment, poking fun at her. There was also an image that was altered to show a gun pointing at her sobbing face.

According to CBS News, husband Domenech spoke out against Twitter for allowing the image to be posted online. Domenech addressed Twitter CEO Jack Dorsey online, tweeting “Hey @jack, this has been up for half a day. It has been reported 100+ times. No response. Tell me why this is cool by you.” The tweet has since been deleted.

The offensive image of McCain was later removed from Twitter and Domenech updated followers by writing, “Twitter finally suspended this account this morning. No one should have to raise a ruckus or highlight this sort of thing publicly to get their attention … It took my hours later tweet to finally get a reaction. Did not want to elevate it but that is what Twitter requires apparently. Oh, and the reaction was from the guy, not Twitter. Looks like he set his account to private.” 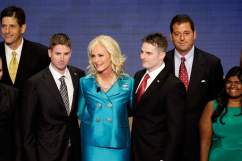 Loading more stories
wpDiscuz
0
0
Would love your thoughts, please comment.x
()
x
| Reply
Meghan McCain is married to husband Ben Domenech. Get to know more about their wedding, family and relationship.