John Kinsman is a member of the Proud Boys, a self-described “Western Chauvinist” organization. He was arrested on Friday, October 19, one week after a violent brawl outside of the New York Metropolitan Club in Manhattan.

Kinsman was the second Proud Boy to be arrested. At his arraignment, prosecutors reportedly called him the “single most vicious” member of the group. The assistant DA said that Kinsman repeatedly punched, kicked, and stomped a member of the antifa group that confronted the Proud Boys — Kinsman then apparently turned to another antifa member and started kicking him, all while holding a cigarette in his mouth. The NYPD has announced it is carrying out a “regular criminal investigation” into the Proud Boys.

Kinsman lives in New Jersey. After his arrest, some of his supporters began circulating photos of Kinsman and his family in an apparent effort to prove that he is not a racist. Here’s what you need to know about Kinsman’s wife and family:

1. His Wife is African American & Calls Herself a Proud Boys Girl

This is John Kinsman, the #ProudBoy who was recently arrested for fighting back against #Antifa terrorists who were throwing bottles of urine and attacking people at Gavin McInnes event. This is his family. He's not a Nazi or a white supremacist. pic.twitter.com/fXd7bJEfsm

Kinsman’s wife, ZC, has been attracting a lot of attention ever since John’s arrest. Her twitter profile shows a picture of the Kinsman family celebrating someone’s birthday. John, laughing, has hoisted up one little boy, while ZC stands beside a smaller boy in a high chair. They’re wearing party hats.

ZC’s tweets are protected. But her profile — a long string of hashtags — expresses pride in her husband, the Proud Boys, and “the West.” It reads, “#JohnKinsman’s wife #Motherof2 #ConservativeLibertarian #WesternChauvinist #ProudBoysGirl #VenerateTheHousewife #Femininity #ENTJ #WalkAway #Blaxit.”

ZC’s twitter page includes a link to fundthewest.org. When you follow that link, you get to a site selling an “NYC ProudBoys support band.” The bands are going for anywhere from 25 to 5,000 dollars.

FundTheWest also sets out the ProudBoys argument against the group’s treatment by police and in the media. A short statement on the site argues that the Proud Boys are not racists but “patriots” who are stuck in a “left wing city that hates them.” The site reads,

“The media is portraying these men as part of an “Alt-Right hate group” despite the fact that two of the four white men arrested have black wives and kids (the other “Proud Boys of interest” aren’t even white). These are just patriots who love this country living in a left-wing city that hates them. Please purchase one of these wrist bands in solidarity with innocent men everywhere who are persecuted by big government opportunists who want to further their career at all costs. 100% of the proceeds will go to legal fees and surrounding costs.” 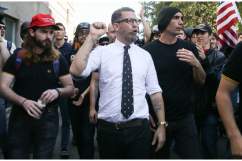 Sham outlet @nypost says Proud Boy John Kinsman, who was recently arrested for DEFENDING HIMSELF against Antifa terrorists who were attacking people at the Gavin McInnes event is part of an "Alt-right hate group."

This is his family. He is not a Nazi or a white supremacist. pic.twitter.com/zAO7OJAuL4

ZC Kinsman’s twitter profile includes a picture of the family: John, ZC, and their two children. ZC’s profile also includes a link to a ProudBoys support side which notes that “two of the four men arrested [after a brawl in Manhattan] have black wives and kids.]

The Proud Boys describe themselves as “Western Chauvinists.” It is not very clear what this entails. Their website says, The basic tenet of the group is that we are “Western chauvinists who refuse to apologize for creating the modern world.” Like Archie Bunker, we long for the days when “girls were girls and men were men.” This wasn’t controversial even twenty years ago, but being proud of Western culture today is like being a crippled, black, lesbian communist in 1953.” The group adds that anyone — not just Caucasians — can be a Western Chauvinist. “Western chauvinist” includes all races, religions, and sexual preferences,” the site specifies.

The Southern Poverty Law Center classifies the Proud Boys as a hate group and says they have a history of involvement in violent brawls.

The Kinsmans live in Morristown, New Jersey. John, a World Trade Center steel inspector, was arrested last week for his involvement in a violent brawl that took place outside the Metropolitan Club on Manhattan’s Upper East Side. The Proud Boys were under a police escort, leaving the club, when they were confronted by a group of anti-fascist protesters. The brawl reportedly broke out after one of the anti-fascists threw a bottle.

Prosecutors say that Kinsman repeatedly kicked, punched, and stomped on an antifa protester; they say he then turned to another antifa member and kicked him, all while smoking a cigarette. Manhattan Assistant DA John Steinglass called Kinsman “the single most vicious of all the attackers.”

5. Kinsman’s Supporters Have Been Tweeting Pictures of His Family to ‘Prove’ That He Isn’t a Nazi

This is John Kinsman, the #ProudBoy who was recently arrested for fighting back against #Antifa terrorists who were throwing bottles of urine and attacking people at Gavin McInnes event. This is his family. He's not a Nazi or a white supremacist. pic.twitter.com/fXd7bJEfsm

Photographs of John with ZC and their children started circulating on social media after John’s arrest and indictment. Supporters fo John and the Proud Boys movement used the photos to argue that Kinsman isn’t a Nazi or a White Supremacist. One wrote, “This is John Kinsman, the #ProudBoy who was recently arrested for fighting back against #Antifa terrorists who were throwing bottles of urine and attacking people at Gavin McInnes event. This is his family. He’s not a Nazi or a white supremacist.”

Another Twitter user wrote to the New York Post, saying, @missrrosenberg @steph_pagones @FonrougeGab Evening ladies… In regards to your article published in the @nypost this evening, John Kinsman is married to an African American woman. I think calling him “Alt Right” is irresponsible. You may want to reconsider your words. Thanks-

@missrrosenberg @steph_pagones @FonrougeGab Evening ladies… In regards to your article published in the @nypost this evening, John Kinsman is married to an African American woman. I think calling him “Alt Right” is irresponsible. You may want to reconsider your words. Thanks-

The Proud Boys call themselves “Western Chauvinists” and claim that you don’t have to be white to be a member of their group. You do have to be a man to be a Proud Boy. ZC describes herself as a ProudBoysGirl. You can take a look at the ProudBoysGirl hashtag here.