U.S. Senator Chuck Grassley has released an executive summary of the FBI report into the allegations against Supreme Court nominee Brett Kavanaugh. The document mentions that two people – Timothy Gaudette and Christopher Garrett – were interviewed in relation to a July 1, 1982 calendar entry.

What is the July 1, 1982 calendar entry? Why would the FBI have interviewed two people about it?

First, here is the Grassley document.

INBOX: Sen. Grassley just emailed an executive summary of the FBI investigation report. It's concise enough to fit in one screenshot. pic.twitter.com/Ubuk3xaANk

Frank Thorp, an NBC News producer and reporter, wrote on Twitter that the document was compiled by Grassley’s staff. “Senate Judiciary Cmte Chairman @ChuckGrassley’s staff has released an ‘executive summary’ that they put together of the FBI supplemental background investigation into Kavanaugh allegations,” he wrote.

The report says that the FBI “decided to reach out to eleven people, ten of whom agreed to be interviewed.” The executive summary says that the FBI “reached out to all witnesses with potential firsthand knowledge of the allegations.”

The executive summary of the FBI report then lists the people interviewed as:

“The three individuals identified by Dr. Christine Blasey Ford as having attended the gathering where she was allegedly assaulted”:

Timothy Gaudette
Christopher Garrett
An attorney for one of the witnesses

A footnote reads, “Mr. Judge was also questioned extensively about other allegations besides Dr. Ford’s.”

The July 1, 1982 Entry Came Up at the Judiciary Committee Hearing When Brett Kavanaugh Was Asked About It

The July 1, 1982 calendar entry came up in questioning of Kavanaugh during the Senate Judiciary Committee hearing into the accusations of Dr. Christine Blasey Ford.

Prosecutor Rachel Mitchell asked Kavanaugh, “The entry says, and I quote, go to ‘Timmy’s for skis with Judge, Tom, P.J. Bernie and … Squi?’”

Mitchell, “To what does this refer, and to whom?”

Kavanaugh, “…It looks like we went over to Timmy’s. You want to know their last names, too? I’m happy to do it.”

Mitchell, “If you could just identify: Is ‘Judge’ Mark Judge?”

Skis was identified as a reference to beer. Gaudette was the host of the party.

Dr. Blasey Ford has alleged that Mark Judge was in the room when she says Kavanaugh assaulted her – although she has not been able to give a specific day or location and has changed her account as to the time frame several times, according to Mitchell’s memo. She has alleged that Leland Keyser and PJ Smyth were both at the party in question. She has not alleged that Garrett, Gaudette, Kaine, or McCarthy were at the party where she says the assault occurred.

However, the proximity of the July 1, 1982 party to the rough time frame she has given led one Democratic senator – Sheldon Whitehouse – to highlight it during Kavanaugh’s testimony. Whitehouse – and others on social media – have implied that the July 1 party might be the same party where Ford says she was assaulted. However, others have pointed out that the number of people there does not match Ford’s account.

Furthermore, a member of Ford’s legal team has said  that Dr. Ford is not arguing that the July 1 party could be the date of the alleged assault because she knew people who attended that party and believes she would remember them.

Chris Garrett came up several other ways in the testimony; he was the subject of unproven allegations on the Internet from a GOP lawyer who later apologized. Ford testified that she went out with him in high school briefly, and she said he introduced her to Kavanaugh. His lawyer has previously released a statement denying he has any information relevant to her claims against Kavanaugh. Ford’s lawyers have released a statement saying she would not mix up her alleged attacker with someone else, and she testified she was 100 percent certain it was Kavanaugh. Kavanaugh has denied all sexual assault accusations against him.

Mark Judge, a writer who featured in the allegations of both Ford and Ramirez, has also denied the accusations.

Smyth and Keyser have said in statements previously released that they don’t remember the party that Ford describes, and Keyser has said she doesn’t know Kavanaugh. Keyser has been described as a close friend of Ford’s at the time.

In its conclusion, the executive summary says, “The supplemental background investigation confirms what the Senate Judiciary Committee concluded after its investigation: there is no corroboration of the allegations made by Dr. (Christine Blasey) Ford or Ms. Deborah Ramirez.”

Kaine told CNN previously that the home where the July 1, 1982 party occurred was 11 miles away from the country club that Ford told The Washington Post the party where she was allegedly assaulted was near.

“I saw it published today that someone’s floating the notion that there was something on July 1 at Tim Gaudette’s house,” Kaine told CNN, according to an account in The Weekly Standard. “Tim Gaudette lived in Rockville. It’s 11 miles away from Columbia Country Club. And it wasn’t a single-family home. It was a townhouse.” Kaine told Weekly Standard he never remembered Ford attending a party at Tim Gaudette’s house and said it was at least 16 minutes from the country club.

According to The Weekly Standard, Kaine said that “another one of his friends, Chris Garrett, briefly went out with her in high school.”

You can read the previously revealed statements of Christopher Garrett, Leland Keyser, and Mark Judge here. 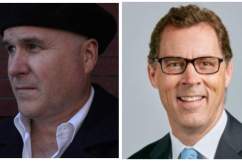 Read More
Breaking News. Politics
wpDiscuz
0
0
Would love your thoughts, please comment.x
()
x
| Reply
Learn more about the July 1, 1982 party entry in Brett Kavanaugh's calendar, now that the FBI interviewed Christopher Garrett and Timothy Gaudette, who were at it.